So. It appears I may bear a good measure of blame for the inexplicable continued existence of the Cleveland Indians racist mascot, Chief Wahoo! Because of cartoons like this one. Inside info has just come my way that sheds new light on what went down at a pivotal moment in the Chief's history. Read on.

Back in 1993, the Indians were readying themselves to move to their new ballpark, leaving behind the cavernous dump by the lake, crumbling Municipal Stadium. The plan was to retire Chief Wahoo when they made the move across downtown. A hissy fit by the Indians owner over my cartoons changed those plans.

The owner was shopping center billionaire Dick Jacobs. He and his brother David had purchased the moribund franchise in 1986, off a dead guy. No lie. The previous owner, Francis O'Neill had croaked in 1983 and the team had been owned by his "estate" for three years. Only in Cleveland, as we are fond of saying here. The Jacobs Bros. were one of the rival billionaire clans of Cleveland, all of whom schemed and fought each other to run the city and gain the primo spot in front of the public trough where hundreds of millions in public funds waited to be devoured. The brothers were riding high in the late Eighties, because the then mayor was an ally, a rare Republican in heavily Democratic Cleveland. The brothers milked Mayor (later Governor, then Senator) George Voinovich for every public dollar and sweetheart deal they could. They sucked the town dry. With the new ballpark, it was the usual cat-and-mouse. The Jacobs threatened to move the team unless the taxpayers funded a new baseball-only ballpark. Voinovich and the daily Plain Dealer beat the drums in support. The county-wide tax issue passed by a hair in 1990. Brother Dave didn't live to see the new park. He kicked the bucket in 1993, a year before it opened.

Dickie boy loved Chief Wahoo. Jacobs was the most loathsome strain of one-percenter, a hard-line free market commando (except for socialist funding of stadiums, of course, and huge tax abatements for all his shopping mall projects). He didn't give a shit about anybody, and certainly not Injuns. There were no Injuns in Cleveland! Just pesky blacks who wouldn't vote for his tax abatements.

For years the Indians had downplayed Wahoo. When Jacobs bought the team in 1986, the Chief was quietly fading away, much like the Cleveland Browns mascot, the Brownie, had a generation earlier. 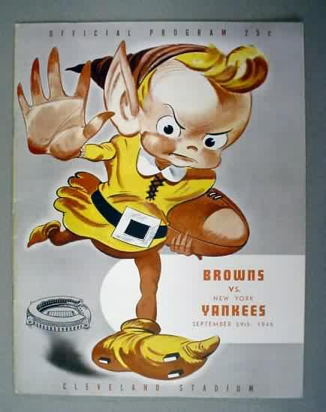 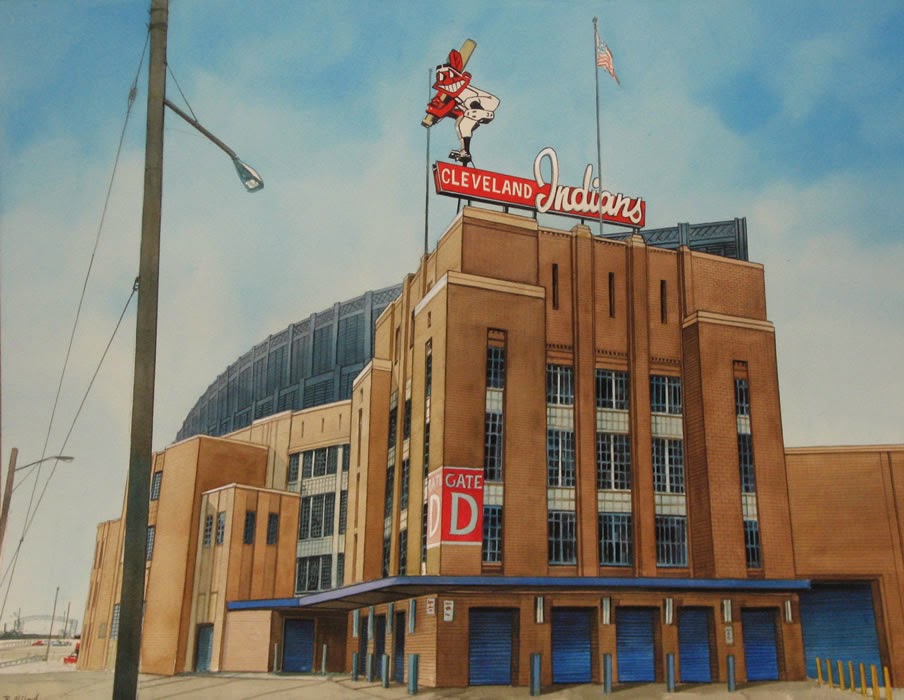 The most prominent use of Wahoo was the rusting neon sign atop the old Stadium. This familiar 28-foot-high landmark went up on the roof in 1962. He loomed over the Shoreway, flickering on and off, depending on how attentive the maintenance staff was to his needs, like a grinning lighthouse Beacon. By the end, he didn't light up at all, and was streaked with soot stains and pockmarked with rust. The Indians uniforms still had the leering visage of their bright-red jigaboo on the sleeve, but the cap featured only a 'C'. There were plenty of Wahoo souvenirs, but the Chief was steadily diminishing, as was the team itself, with a steady string of epically bad 100-loss seasons. Nobody really gave a shit about Wahoo because nobody gave a shit about the hapless Indians. They were never on national TV. They didn't come within 20 games of the playoffs. In fact, they were usually 30 games back by the All-star break! They were ignored by Sports Illustrated and the other big sports media. The team barely existed at all. Outside of Cleveland, most Ohioans were Reds fans.

Jacobs vowed to "revitalize" the franchise when he bought it. One of those measures was to embrace Indians history, even though the team hadn't won a title since 1948 and had been the worst team in baseball for the past 25 years. To accomplish this, Jacobs plastered the retro Chief on any and everything.

Idiot baseball fans loved this pandering to "tradition," even if that tradition was a total fabrication. But there were some who strongly objected. Suddenly, Native American protestors, led by late activist Russell Means, started picketing opening day. That had never happened before and it got lots of coverage. Jacobs stewed. This was not part of the plan.

Several locals also hammered away at Wahoo. One was the late Daniel Thompson, then recently named Cleveland's poet laureate and one of the central forces in the burgeoning arts scene. He often joined the protests.

I began taking potshots at Wahoo when I joined the weekly paper, The Edition in 1990. I was pretty much the only media figure in town to do so. All the others, from radio to TV to the daily columnists and political cartoonist had no problem at all with the Chief. I and The Edition were the only media who were calling out the Indians for their racist cartoon character. Hard as it is to believe, Wahoo had never been subjected to cartoon satire until I started doing it. Hell, just a few years earlier, the Plain Dealer had an old-time sports cartoonist who drew the Chief every day for the paper! He'd been doing this since the Fifties. If the Indians lost that day, he'd draw Wahoo with a black eye and a broken feather and little stars spinning around his head. If they won, which didn't happen very often, he'd be running around with a big grin yelling "Woo! Woo! Wooo!" Seriously! They were that horrendous. 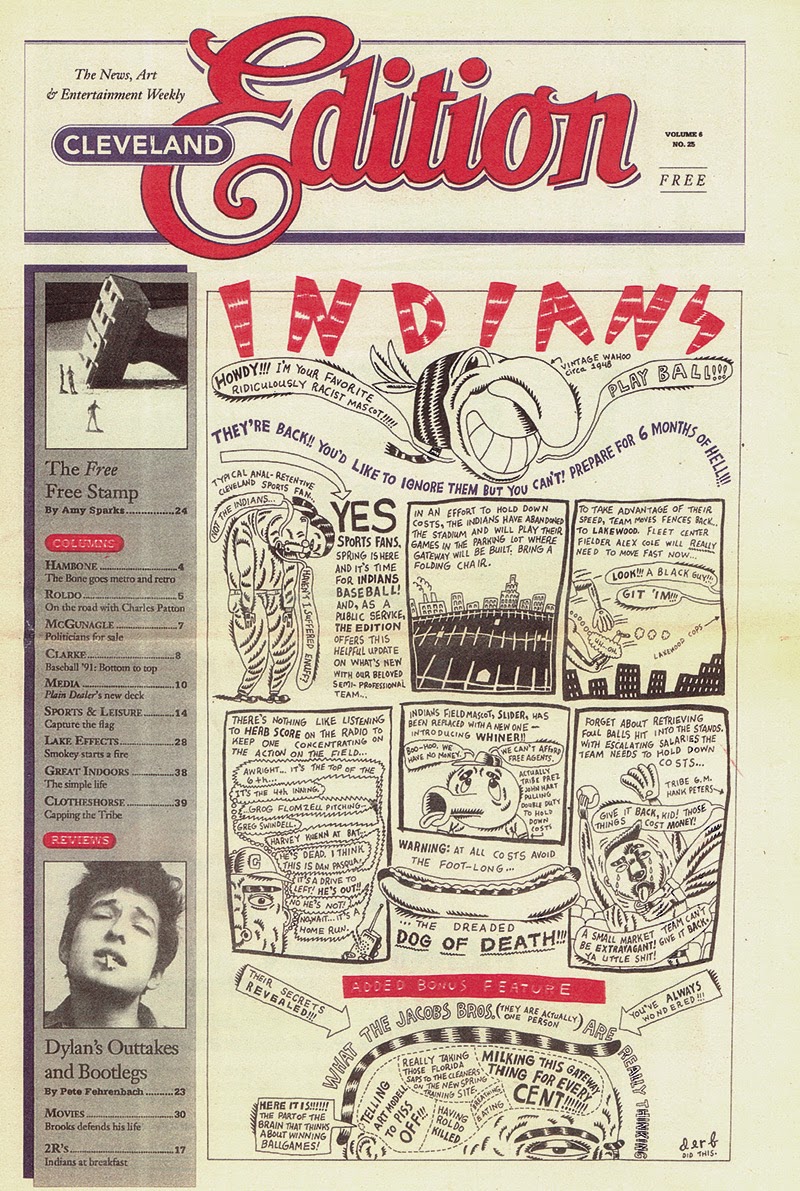 Remember now, it was a very different time in 1993. There was no internet, no smartphones or iPads. Cable tv was growing fast, but was only about 13 years old and hardly all pervasive. Newspapers still had some muscle, even struggling weekly rags. Stacks of Editions were all over downtown. People read it and its content created a buzz. I drew several anti-Wahoo covers in the early Nineties and Jacobs couldn't help but see them as he stalked from his limo to his office. Cleveland is a big city, but it's movers and shakers act like it's a small town. They are infamously thin-skinned, especially our Lords of Professional Sports. 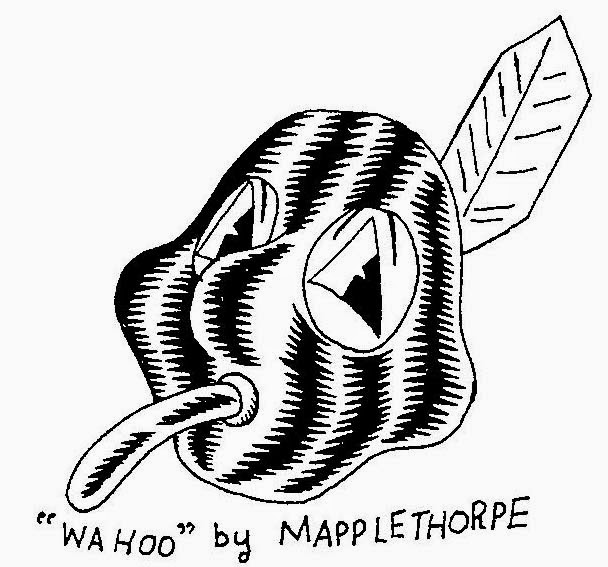 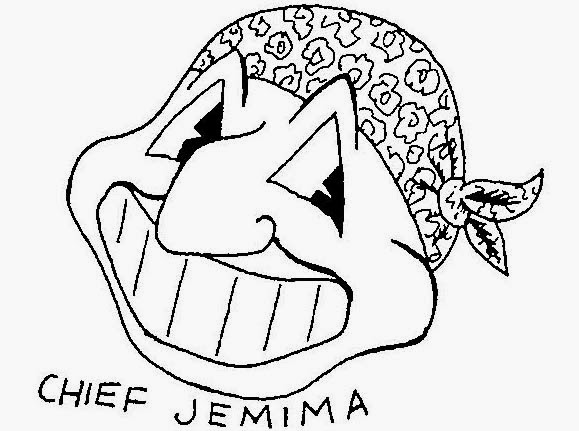 These cartoons hit the streets of Cleveland like hand grenades and images like the ones above  sent Jacobs and his sycophants into a rage. The response was crazy! An Indians exec called the paper, chewed out a staffer and canceled the paper's press credentials! This kind of outside-the-box criticism simply wasn't done in Cleveland back then, and certainly not from the timid, lapdog local media. The Edition was an altogether new breed. It's what made the weekly genre so great, for a while anyways. No one else was doing work like this around here, I'm proud to say, and The City in these early days was the talk of the town, in the way a local comic strip just can't be anymore.

This Wahoo strip up top was one of the most popular and controversial ones I've ever drawn. I still get comments about it, two decades later!  Chief Jemima? Guess that one hit way to close to home! And Wahoo Mapplethorpe, back when the controversial gay photographer was public enemy #1 to Moral Majority cretins like Jerry Falwell and Jesse Helms, was even worse! Mapplethorpe had been all over the news in Ohio, thanks to the police raid in Cincinnati that confiscated an exhibit of his gay S&M photos and the subsequent obscenity trial. The great cultural divide we now enjoy was just starting to form its great fissure. This was long, LONG before the current gay rights movement. Back in the early Nineties, fags were fags to mainstream America. Jacobs did not appreciate his treasured mascot being coupled with Mapplethorpe.

The offensive cartoon mascot made even more offensive. I take great pride in that, as a satirist. And it worked! But... the result wasn't what I hoped for.

Jacobs responded to this criticism like you'd expect a pampered billionaire to respond. He threw a temper tantrum. Nobody told this plutocrat what to do! Not the mayor, not the voters and certainly not some fucking poet and a guy who draws funnies! The comment below was messaged me after my recent Facebook thread about Wahoo. It comes from a guy who was an editor at a suburban paper back then:

"Dick Jacobs was ready to retire Chief Wahoo when the Indians made the move to Jacobs Field. But he was getting so much shit from a few critics, that he said, fuck 'em, and kept the Chief out of spite! Derf ... so YOU'RE the one ..."

I had no clue this was all going down. I knew the Indians were angry about my cartoons, and at anyone pissing on the carefully-orchestrated lovefest for the new park. I had no idea how enraged.

In a Shakespearean twist, The Edition folded in the Spring of 1993, just as the final season at Muniipal Stadium got underway. I tried to shop my strip to a rival paper, a lowbrow but very profitable music rag, and met with one of the editors and showed him a portfolio of strips, including the Wahoo one, thinking local content would be the big attraction. Wrong.

"Oh, the Indians were really  pissed off about this one," he told me, as he held it up.

So even he heard about the blowback! I can't believe I never pieced this all together before.

"The Indians give us a free field box. Man. I don't know what I'd do without those seats!" he said, as his lips pursed and brow furrowed, obviously running a mental checklist of all the freebies my cartoons could potentially cost him.

Needless to say, I ended the meeting right there with this pillar of journalism ethics.

Eventually, a worthy descendant to The Edition emerged and I found a home for my strip there, but The Cleveland Free Times, didn't start publishing until that October, after the Indians last seasoning Muni Stadium concluded. So Jacobs had the whole season to cool off. He didn't. What a fucking baby.

Wahoo made the move to the new ballpark. Because a billionaire was pouting over a few protestors and a couple cartoons. When Jacobs Field opened in April 1994, that grinning red abomination was everywhere. He's been the appallingly racist face of the franchise ever since.

And get this, I was a season ticket holder in 1994! Hey, I love baseball. I just hate Wahoo. Does that make me a hypocrite? Maybe. I asked Russell Means that very question back then at another opening day protest, and he smiled, thanked me for the support and said it was ok to like baseball.

Posted by Derf Backderf at 5:11 PM