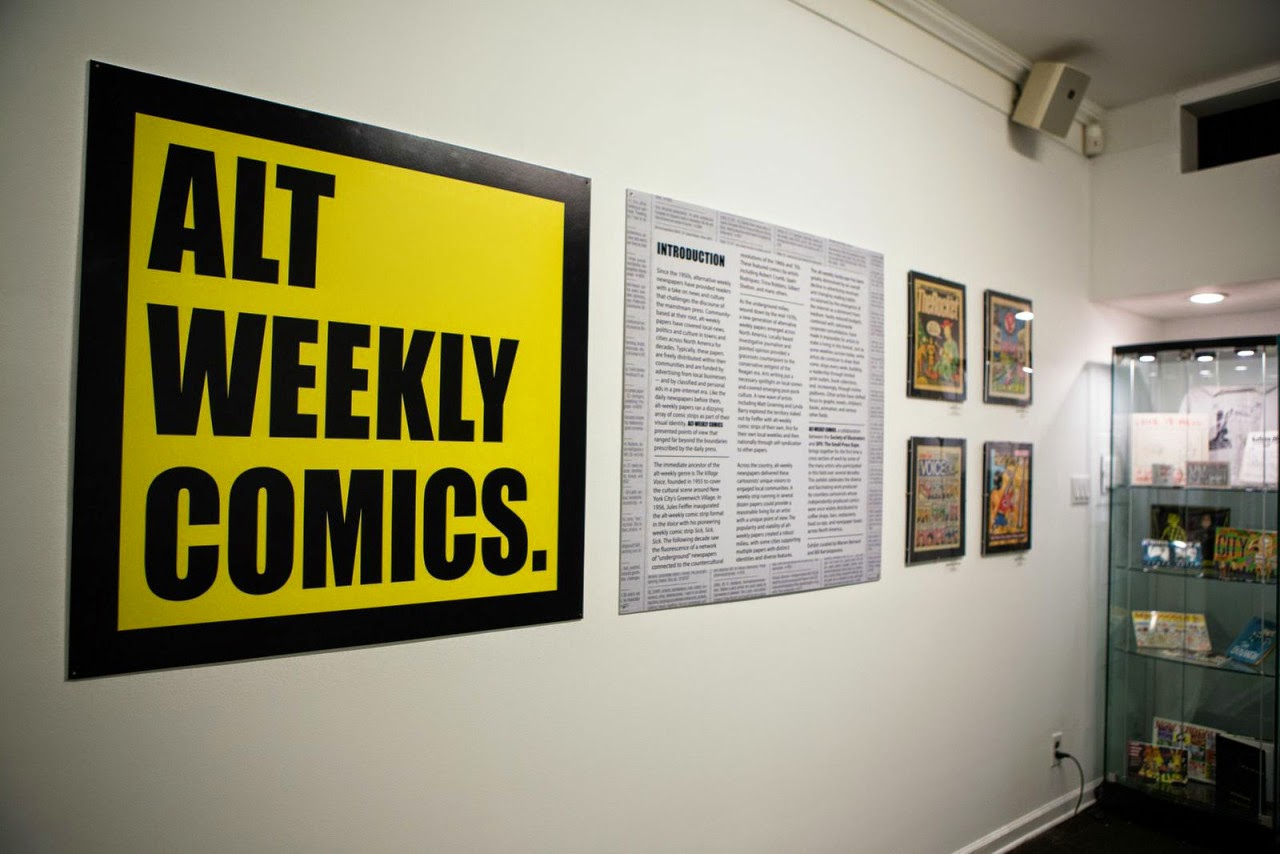 If you're in NYC this month, don't miss the Alt-weekly Comics gallery show at the Society of Illustrators at 128 East 63rd Street. It features (most) of the major players in this extinct genre: Matt Groening, Lynda Barry, Tom Tomorrow, Doug Allen, Ben Katchnor, Mark Newgarden, and many more, including yours truly.

It's wild, and a little disconcerting, that we've collectively become archival. I didn't envision winding up in this place when I started working in the weekly press in 1990. A lot can happen in a quarter century, of course. In this case, an entire genre rose and fell. But for a period there, roughly 1985 to 2000, weekly cartoons were unparalleled in excellence and influence. No one could touch us, certainly not  the syndicated schlock you found on the daily comics page, and not even the stuff, albeit terrific, found in indy comix.

So I'm happy to see this most ephemeral of comix genres get its day, hopefully the first of many. As The Comics Journal points out in its review of the show, alt-weekly comix have largely been forgotten. They were just too temporary. They existed in piles of newspapers stacked at the coffee shop door. You read them over a latte and then tossed the whole thing aside when you left. Two days after drop off, all that week's copies were gone, or were blowing down the street outside the coffee shop. No one collected them. No one archived them. Virtually all of the pieces and tear sheets in this show come from the individual creators themselves. And it was tough getting copies from the papers for my own files! 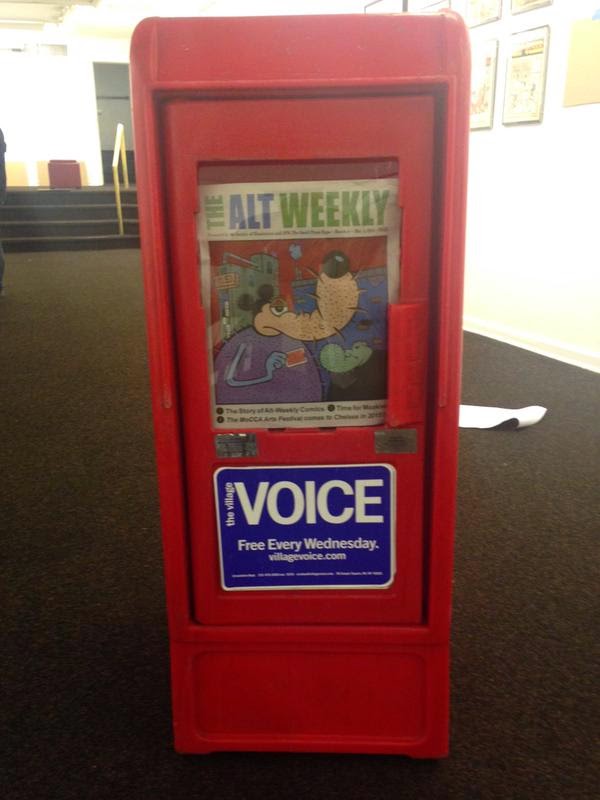 The printed program for the show is a faux alt weekly, with a boffo cover by Kaz and displayed in a Village Voice newsbox. The Voice is one of the show's sponsors, which is bitterly ironic, since the paper jettisoned all its comix several years ago in the kind of ill-thought-out budget trim that is sadly typical of the alt-weekly biz, or what's left of it anyways. 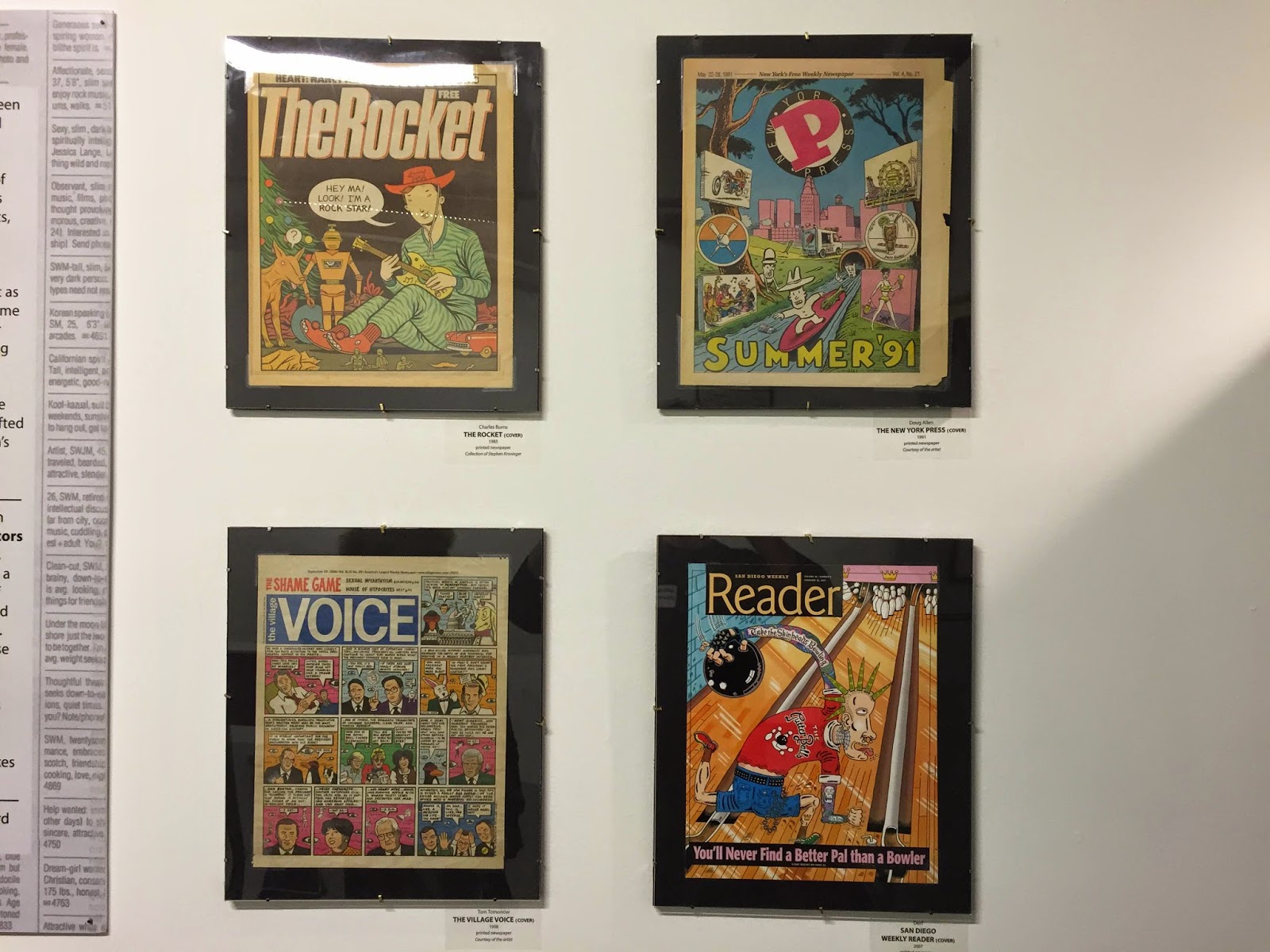 A nice display of covers. That's one of mine, drawn for the San Diego Reader, lower right. I loved doing covers and probably drew 2 a month throughout the Nineties. 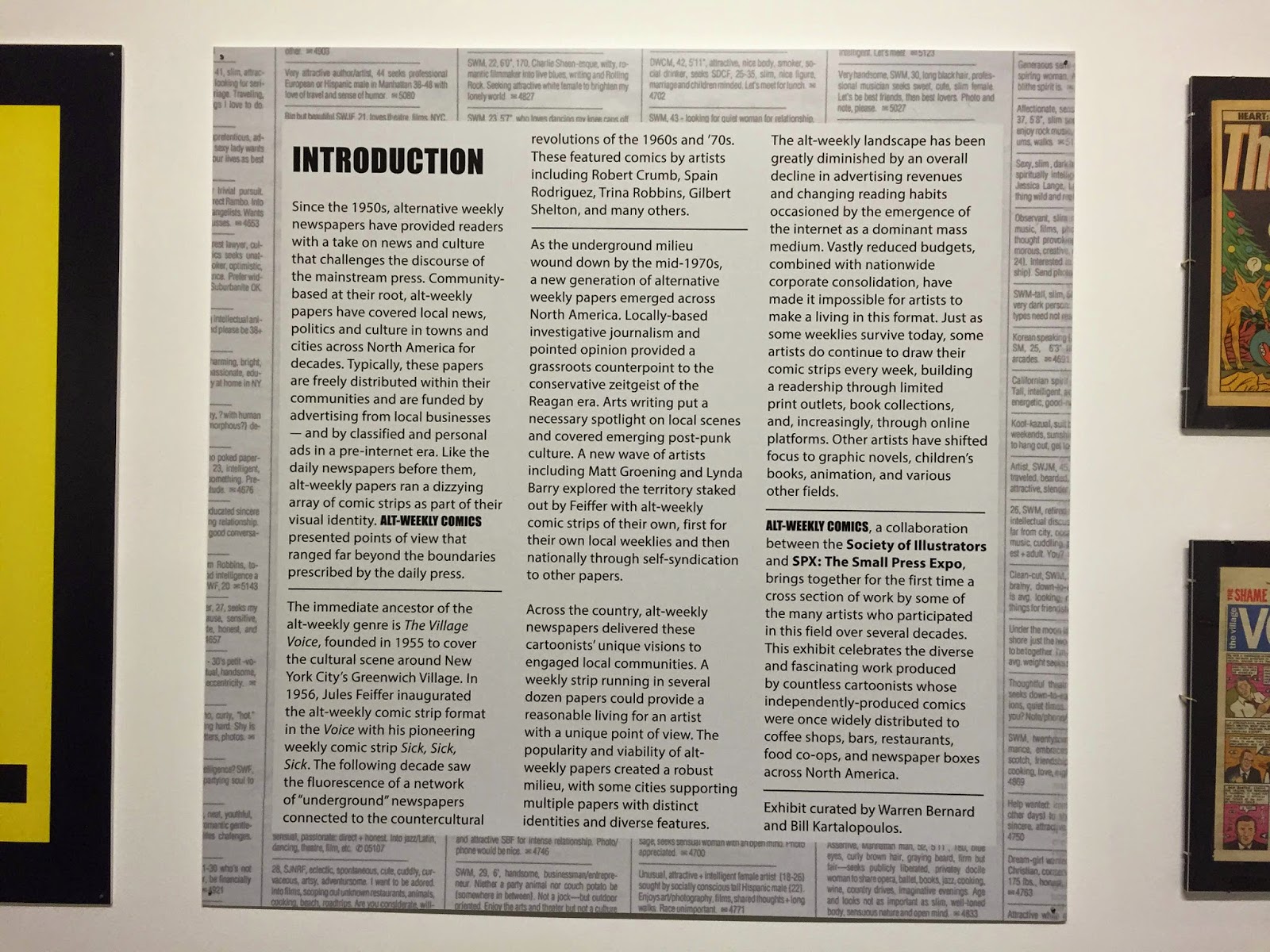 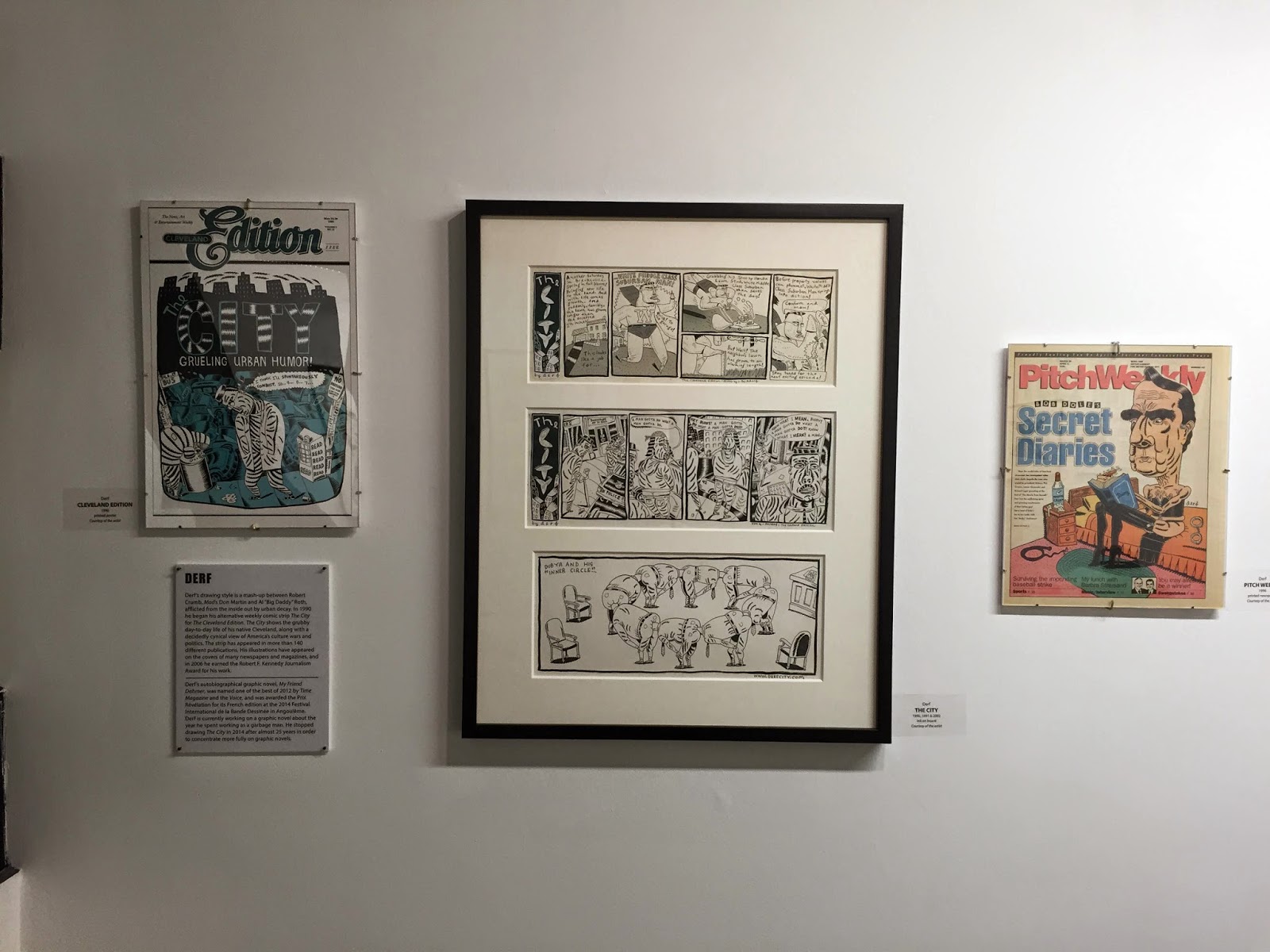 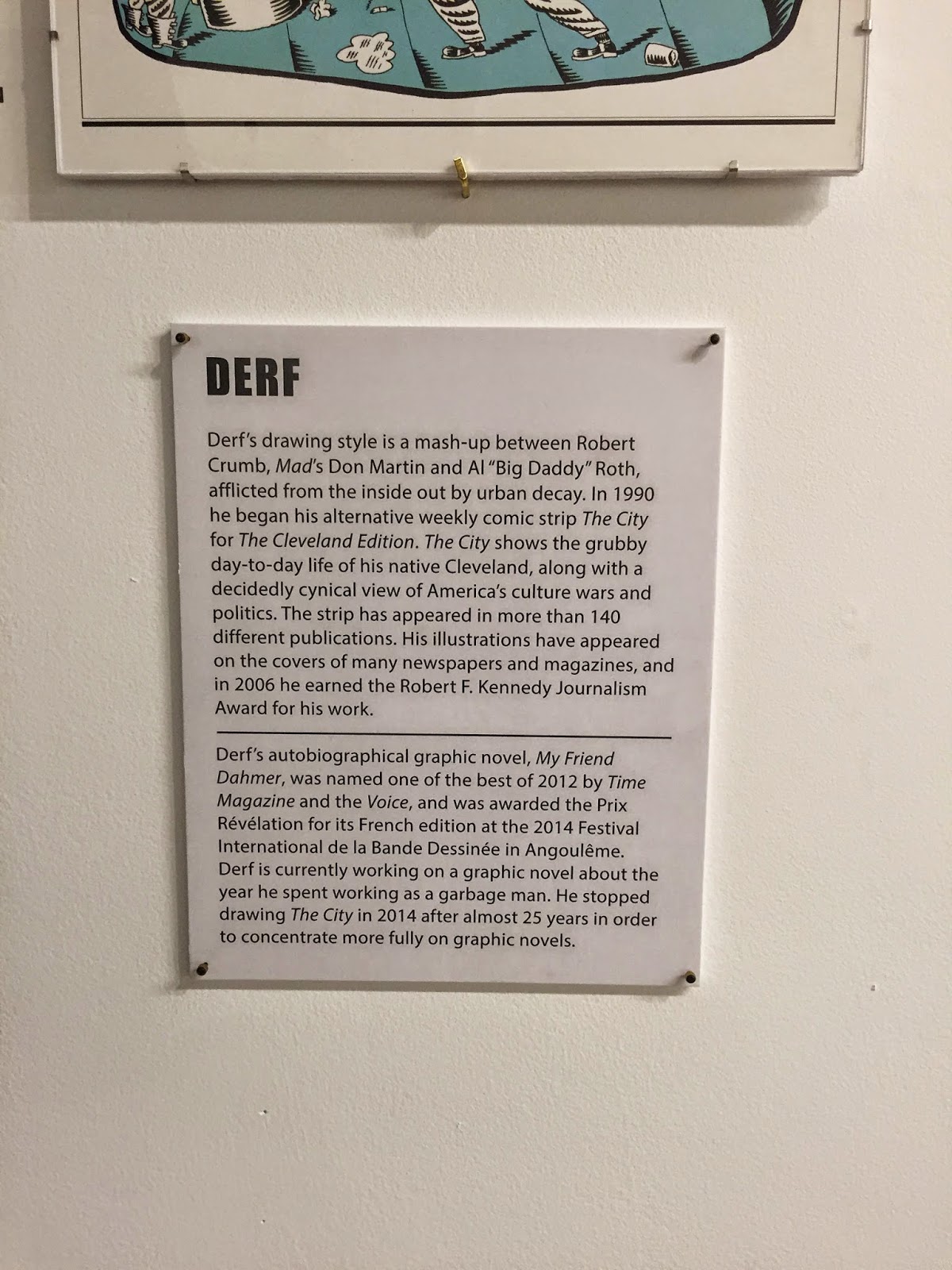 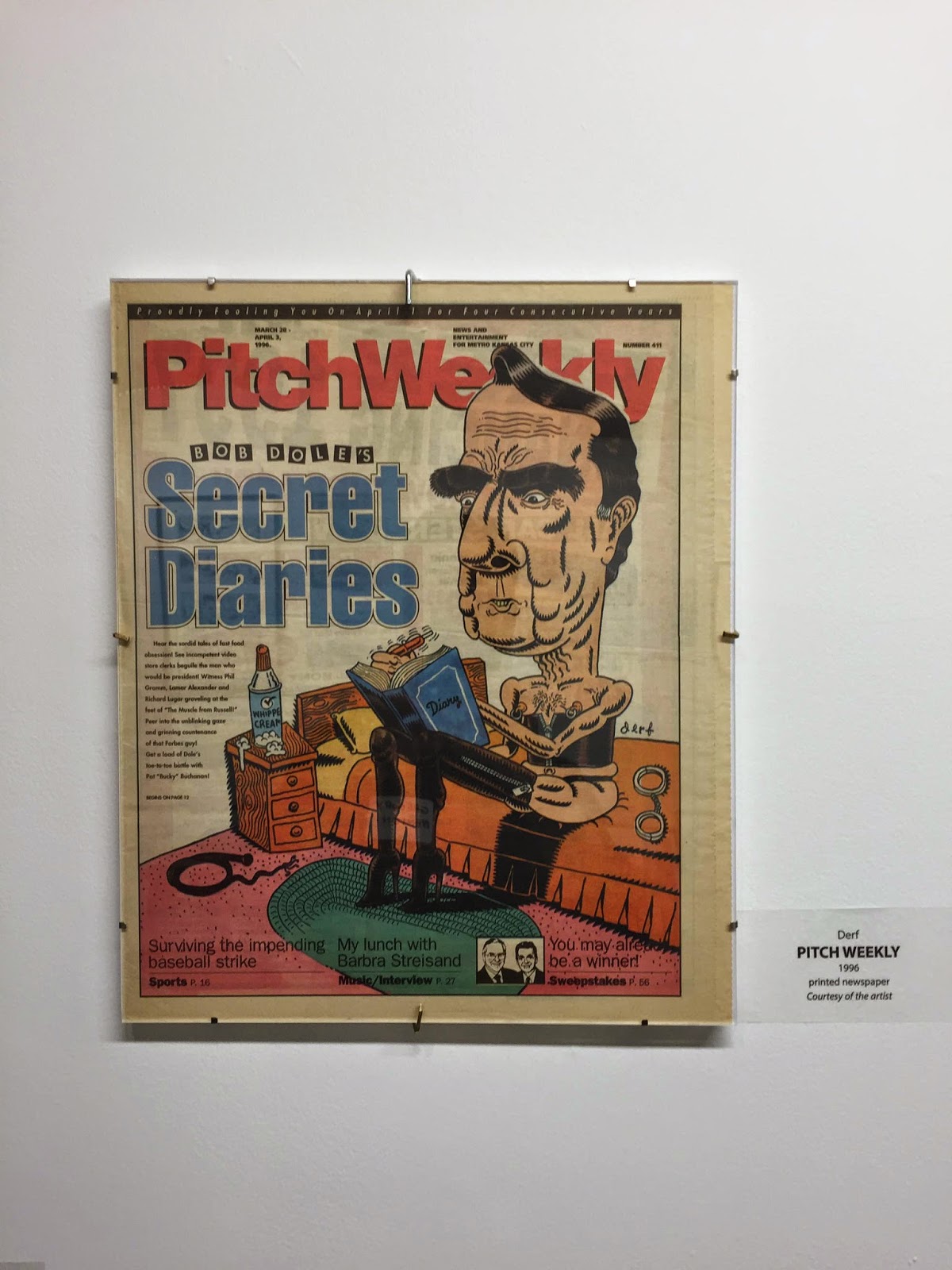 This cover (and some inside illos) was for Pitch Weekly in Kansas City. Bob Dole, the Kansas native son (and yes, I know KC is in Missouri) was running against Bill Clinton and Pitch, which had covered Dole for years, unleashed this comic fusillade against him. Great fun to draw. 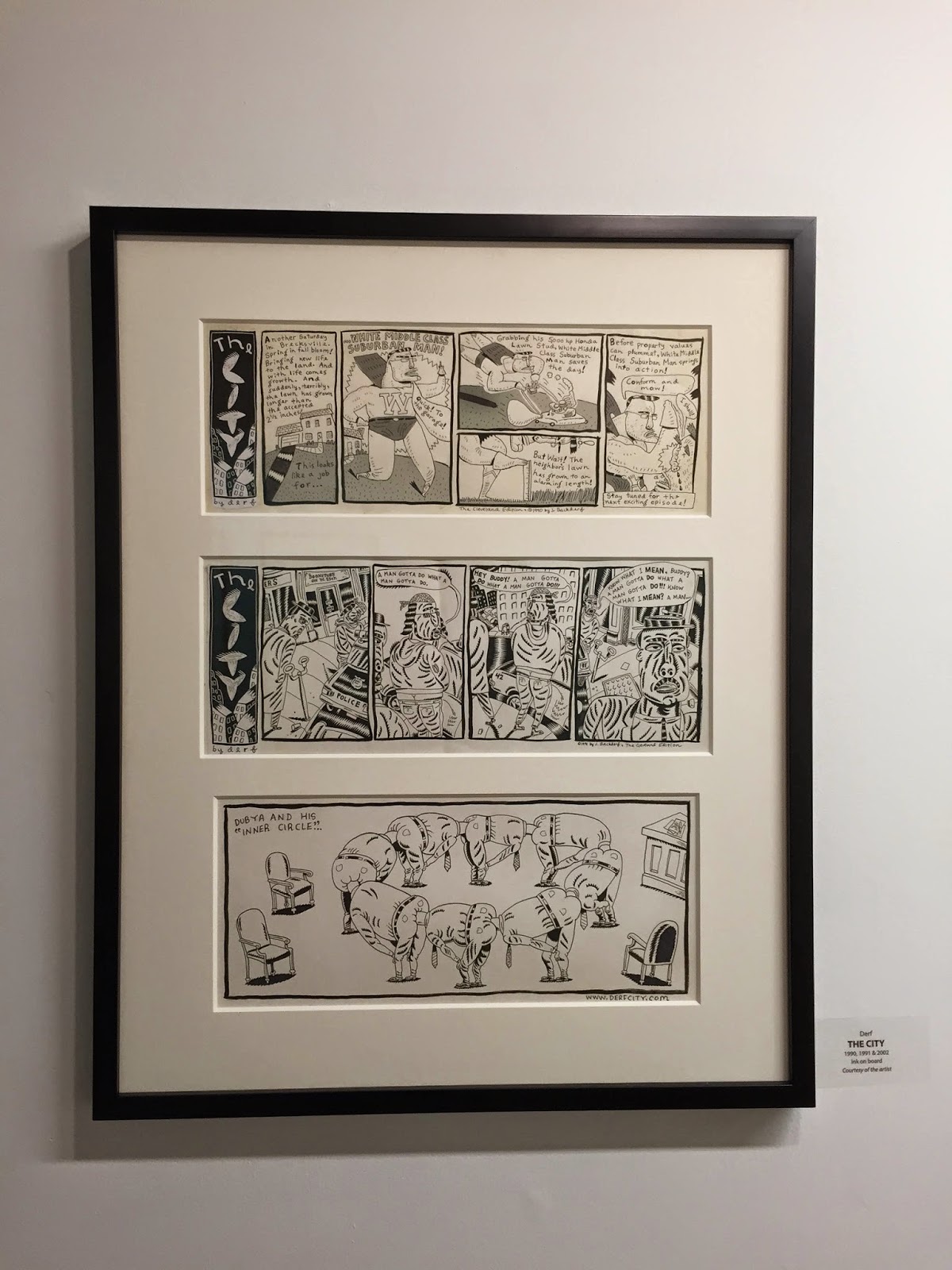 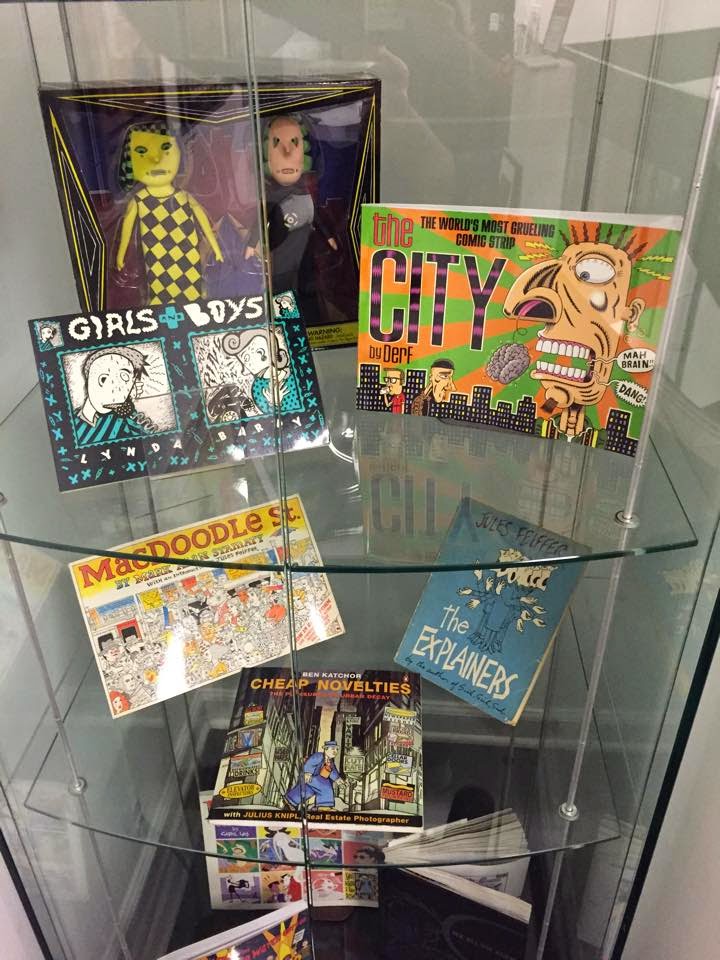 An array of book collections and swag. Most long out of print. Most of us didn't have much luck with book collections. They just didn't sell, especially freeform comics like mine. Groening had a lot of success with his Life In Hell books, and Charles Burns and Chris Ware did well in the indy comix market, but their features were ongoing narratives that were basically serialized comic book stories, so it was a natural transition.

In the past six months, weeklies in Boston, Providence, Calgary and San Francisco have closed. All the creators in this show, each one of whom were thrown over the side as weekly rags began to flounder, have gone on to bigger and better things. Have risen to the top in other fields, in fact. It's an incredible list of talent. It's mind-boggling that we weren't valued by the geniuses that were running the weekly press.

Posted by Derf Backderf at 4:23 PM