Look what showed up in the mail! 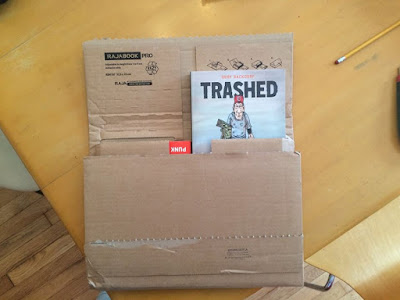 It's my favorite part of the whole, long process of making a book, that moment when the first copy arrives on my doorstep, fresh from the printer, and I hold the book in my hands for the first time. It's such a emotional payoff– satisfaction, relief, excitement, all mixed together. 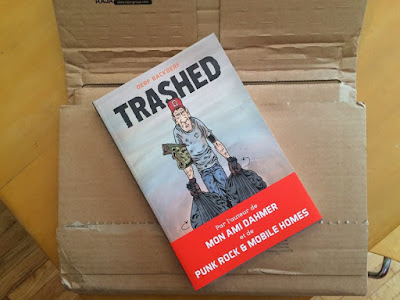 Don't get too excited, though, because this is the French version! It's being released at the same time as the US version. I won't see copies of the latter  for a few more weeks. My French publisher bought it sight unseen, thanks to the sales of both Mon Ami Dahmer and Punk Rock et Mobile Homes. Happily, when he finally did read it, he liked it a lot.

So my summer vacation is almost over. I've spent the last couple months dicking around the house, tackling some rehab projects, cleaning out clutter from attic and basement and generally just loafing and recharging, after the year-long marathon to finish Trashed in record time. I actually feel kind of guilty taking time off and doing very little worthwhile. Curse this Protestant work ethic!

I have a couple assignments I've been sitting on, which I now have to rush to complete before I hit the book tour road. I don't know if it was a mental block or what, but I just couldn't get started on them. Guess I shouldn't have taken that break.

So Trashed will debut at the SPX comix fest in Washington DC, Sept. 19 & 20. I'll be a featured guest. It's well worth a trip to attend this con. It is simply amazing. After SPX, I hop a flight to Paris the next day for a two-week tour of France, my fifth visit since Mon Ami Dahmer was released in 2013. It's been the highlight of my career, that's for sure. Once that wraps up, I fly directly to Columbus, Ohio for the new CXC comix fest on Oct. 2 & 3, run in conjunction with the Ohio State Cartoon Library. Talk about a line-up of heavy hitters: Art Spiegelman, Bill Griffith, Jaime Hernandez, Dylan Horrocks, Jeff Smith, Craig Thompson.... and, gulp, me. Presumably, I was invited to help put away chairs. Then home.... and collapse. That's just the first leg of the book tour!