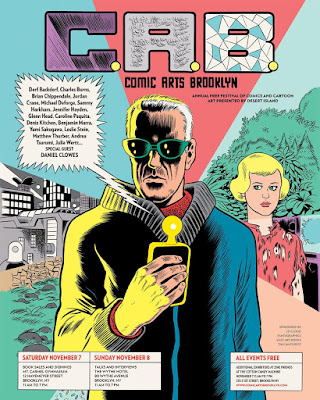 With the official US release date fast approaching (Nov. 3), the book tour will be firing up again. Next up is Comics Art Brooklyn, Nov. 7 & 8, where I'll be a featured guest. On Saturday, Nov. 7, I'll be manning a table at the expo at the Mt. Carmel Gymnasium. Hopefully all day, but arrangements are not yet finalized.

On Sunday, Nov. 8, I'll be in conversation with the fabulous Karen Green, comix expert and curator of Columbia University's comics and cartoon collection, at the Wythe Hotel in Brooklyn, which is where all the Day 2 seminars take place. Don't have a time yet.

This will be followed by a few days in NYC. There'll be at least one additional signing.

I've been getting lots of "are you coming to (fill in the city name here) on this tour?" The answer is, probably not. My publisher prefers to focus on fests and cons, instead of the old different-city-a-night book tour. I have no problem with this, since those kinds of tours are brutal and not much fun at all.

If I do make a store appearance somewhere– and I may– those are events I arrange myself. Those are usually limited to stores in the Midwest, ones I can drive to. Because of this, I've never done any signings west of the Mississippi! Hey, I'd love to sign for fans in Portland or LA, but it's simply too expensive for, frankly, the payoff.

Which is another point. In the fast-changing world of book publishing and retail, store signings are becoming less and less of a thing. The reason? People just don't come out for these events anymore. In Europe, where bookstore culture is strong, and people actually hang out regularly at their favorite shop, I'll get 50 or 60 people at a signing with only minimal promotion. In the US, I'll beat the drum on social media for several weeks and be lucky to conjure up half that. Even stranger, US stores will have people reserve signed copies, but they don't want to come to the event, just to pick them up at their leisure! The result is I sign a big stack of books for invisible fans in a nearly empty store. It's weird, and not much of a payoff for me, since I enjoy meeting fans. Americans just don't want to leave their homes anymore.

Here's something to think about though. I usually do a free title page drawing at signings, unless there's too many people in line. But that's only a reward for people who make the effort to turn out for the event.

At fests and cons, on the other hand, you have hardcore fans showing up in droves. Obviously, these fans are getting more bang for their buck, with a number of creators at one venue. It's understandable why publishers favor them. Alas, most of these are in the eastern half of the country. West Coast cons are mostly of the Wizard World variety, and that ain't my scene.

That's a long-winded explanation on why I probably won't be signing in your town.