The Washington Post throws its cartoonist under the Ted Cruz campaign bus. 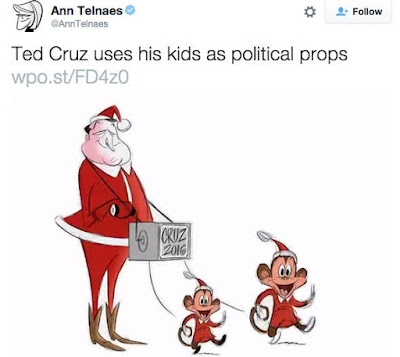 Here's my take on the Ted Cruz cartoon controversy.

A squeamish editor at The Washington Post yanked this Ann Telnaes cartoon yesterday. It's an animated cartoon, so this is just a screenshot. In it's place, there is an editor's note by editorial page editor Fred Hiatt apologizing for the cartoon.


The cartoon depicted the loathsome Ted Cruz and his daughters as trained Christmas monkeys. Cruz, of course, having used his daughters in one of his cloying political ads, in this case showing our favorite Cultural Warrior reading them a Christmas story.
Sadly, it's yet another example of newspapers losing their kahones when faced with a biting political cartoon. Telnaes has won the Pulitizer Prize, so she's no lightweight. She's syndicated, not on staff with the Post, although they may have some exclusive agreement with her, I'm not sure.
I know exactly what happened here. I've run into this sort of thing myself, many times. Editors only want a political giggle of the day, one that won't have them spending their otherwise sleepy mornings answering emails and phonecalls from outraged supporters of whoever is targeted in said cartoon. The editor saw this cartoon after it went up on the Post's website (and probably not before) and visions of Cruz faithful bombarding him with brickbats danced in his head.
Why should the Post care? In Teddy's case, does this editor really think any Cruz supporters are Post readers? Of course not! So all he's done is send the Post's liberal readers into a rage, for cow-towing to Cruz.
This kind of shit with political cartoons happens all the time, although usually not so publicly. Usually, such a cartoon would get spiked before it was published. Sadly, it's been like this for decades. These quavering corporate types have utterly decimated a once-vibrant cartoon genre. Thomas Nast wouldn't last a month at one of today's corporate "family" newspapers.

Political cartoons peaked during Watergate, when a who's who of greats savaged any and all: Paul Conrad, Pat Oliphant, Paul Szep, John Fischetti, Don Wright, Herblock, etc etc. But by the mid-Eighties, daily newspapers were being gobbled up by giant media chains and daily papers became monopoly publications, as competing papers were bought and closed. The edict from the board room was a daily newspaper now had to be all things to all readers. Strident opinion– well, strident LEFTwing opinion anyways– had to be muzzled. And especially those damn cartoons.

That set the stage for the current generation of editors, who were trained to appease, not offend. All the great cartoonists I listed above had died or retired (except Oliphant) by the end of the Nineties. The next generation of cartoonists were hired by the quavering corporate types.  Viciously funny cartoonists need not apply. When the downsizing frenzy hit the newspaper biz a year years later, these cartoonists were the first tossed over the side. And why not? After 30 years of editorial emasculation, most of those guys were pretty disposable, frankly. Almost all were drawing exactly the same way, telling the exact same gags. McCartoonists. We all recall the day after 9-11 when every cartoonist in America drew the exact same piece: the Statue of Liberty weeping into her hands as the Towers burned. That depressing display of groupthink marked the official end of political cartoons as an effective genre in this country. The quavering corporate types had won.
Now, It's a general rule among cartoonists that politicians' kids are out of bounds, until they're adults or unless they do something incredibly stupid. Obama's kids, of course, have been savaged by online rightwing trolls, and the Bush twins were targets, too, but very seldom by cartoonists. As vicious as I was to Dubya, I can't recall ever putting his girls in a cartoon. Now... Teddy is wrapping himself in his family and sticking his kids in ads, so he really can't squawk much when satirists call him on it. But, of course, he is. Today he's howling in outrage and gleefully exploiting the now-yanked cartoon as evidence of the.... queue scary music... LIBERAL MEDIA! And the Tea Party types are lapping it up.
So, in other words, the Post editor walked face first into that one. All he did was give Ted a giant gift-wrapped media blast for Christmas, and throw a Pulitzer winner under the bus.