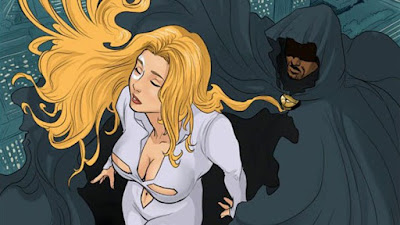 Comix superstar Kate Beaton has taken on dumbass superdude comics and their proclivity to depict women as preposterous boob-inflated pole dancers in 5-inch fuck-me heels. In a series of hilarious tweets she riffs on Marvel's Cloak and Dagger characters (pictured above), particularly the underage heroine Dagger, who sports some rather impractical "tit windows" in her costume. You can read the tweets HERE.

I myself took on this very topic, way back in 1997 when superdude comics were at their dumbest. 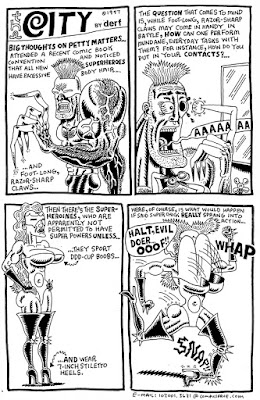 The issue now, of course, is that, unlike 1997 when the mainstream comics industry had crashed and damn near went under completely, women are coming into the field in HUGE numbers, as both readers and creators. Women and girls are the fastest growing comics readership in 2015.  In 1997, that readership was all male. But walk into a typical mainstream comics shop today and it's nothing but tits and high heels as far as the eye can see. One hokey cheesecake cover after another. A wall of tits! It's like the back room of newsstands when I was a kid, where all the porn mags were on display and pervy businessmen would slink in and out to drool over the stroke mags during lunch hour.

Personally, I say..... FABULOUS! The mainstream companies don't want those women readers? Fine. I'll take them! That's why comics like mine... and Kate's... are enjoying great popularity. And the mainstream publishers can continue to pander to their shrinking readership of superdude fanboys who get off on tit windows. Of course, those fanboys who were 20 in 1997 are now middle-aged, and since Dagger here is an underage teen who's the same age as their daughters, that's kinda gross.

Kate is apparently getting a lot of shit from said fanboys, who are a humorless bunch when someone dare points out the stupider aspects of their reading material. I caught some crap for the above strip, too, although 1997 was before the Electric Intertube really took off. Note the clunky Compuserve (anyone remember Compuserve??) email address that's all numbers! So the grousing was limited to nasty letters and face-to-face grumbling. There was a comics shop I frequented then where I bought my Fantagraphics and Drawn & Quarterly stuff, having long lost interest in superdude books. I got chewed out there by the owner and a couple of his customers over this strip. It was good-natured, but nothing is good-natured on the Electric Intertube. I liked this strip when I did it.... and still like it!... but I guess the typical alt-weekly reader of that era wasn't a comic book reader, because the reaction, frankly, was mostly indifferent. Comic books in the Nineties, before the blockbuster movies, were very much a dirty little lowbrow thing.

Not that the mainstream publishers care about attracting female readers. Oh sure, they wouldn't mind, and I think they're trying. It's just that they haven't a clue how to do so. And, as long as the movies and tv shows are making billions, they don't really give two shits about the comic books. Marvel and DC, it's long been rumored, operate at a loss!

Posted by Derf Backderf at 9:42 AM