The War on Political Cartoons Continues

Not satisfied with the almost total extinction of the daily political cartoonist, the Corporate Master of Media are now turning their attention to niche publications and their cartoonists.

Rick Friday has been penning political cartoons on farm issues for the Farm News in Iowa for 21 years. Last week, he wrote a cartoon that was mildly critical of the salaries of AgriBiz CEOs. 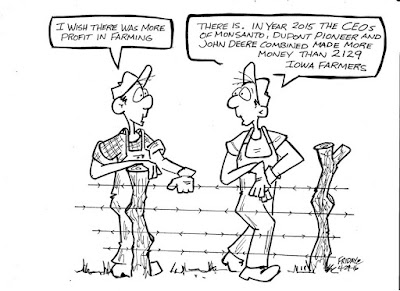 The editor of Farm News emailed him the next day with the news that higher ups had ordered the editor fire Friday immediately. Apparently, an advertiser, presumably one of the AgriBiz's in the cartoon, had yanked its ads in protest and the newspaper decided to buckle and throw itself at the feet of the offended corporate entity and plead for mercy.

This is how bad its gotten for the once-storied profession of political cartooning. Our Masters don't like being made fun of in cartoons, no matter how small the publication.

Wrote Friday in a facebook post: "Hopefully my children and my grandchildren will see that this last cartoon ... will shine light on how fragile our rights to free speech and free press really are in the country."