I'm back. Almost a month abroad in France and Belgium on book tour, and at the  Angoulême International Comix Festival, a week-long celebration of all things comix.

Jeezus, where to start? I will say this, if I croaked tomorrow, the past month will stand alone as the highlight of my career.

I arrived in France a day late, due to the polar vortex that closed airports across the entire eastern half of the US. Thanks, Obama! But benefiting from a monster tailwind from that same vortex, I arrived in Paris an hour early. I lucked out and managed to catch an earlier train to the village of Angoulême, a two-hour ride to the south, and avoided a five-hour layover.  Luckily, I'm an experienced traveler with 20 or so trips abroad under my belt. I got off in Angoulême and simply followed the crowd from the train station up the hill, dragging my bags,  to the town center and the festival. Took awhile to talk my way into the venue without a pass. Good thing my picture was in the program!

One of my first discoveries was that Blogger wouldn't allow me to log on to my account from a "suspicious" locale without a confirmation code. Unfortunately, this code was texted to my cellphone…. which doesn't work outside the US. OK. So there would be no posts this month. Those of you who follow me on Facebook or Twitter got daily updates. To the rest of you who "endured" a month of radio silence, sorry about that.

Angoulême is the Cannes Film Fest of comix. It's one of the oldest cons in the world, started in 1974. The festival takes over the entire village and draws an estimated 200,000 fans each year. Every venue and building in town is devoted to the fest, and dozens of tents are erected in the streets and plazas to house publishers and merchants and artists. Tents isn't really the right word. They're more like portable buildings, with a hard floor and lighting and heat! My French publisher, Éditions çà et là (which translates to "here and there"), was in the indy comix tent, which was the length of about two football fields. Éditions çà et là was founded by Parisian Serge Ewenczyk, who spent boyhood summers in New Jersey and developed a love of American comics. Éditions çà et là only publishes non-French creators and, thanks to Serge's eye for good comix and respected status in the French comix biz, Éditions çà et là is a fast-rising force in the French scene.

The whole town is devoted to comix. Streets signs, murals, displays in every corner of the village. Exhibitions are held in several venues. Even the buses are festooned with comix! What is almost totally missing is the overbearing corporate presence you find at, say New York Comicon. There are no Craftsman Tools meets the Justice League displays. No t-shirt tower. No video game launches, or autograph areas full of aging TV celebs. It's all about the comix here.

A little about the Franco comix scene. The French love, and create, comix more than any other European country. But the superhero dreck that curses American comix has very little readership here. A shop owner told me superhero comics account for maybe 10 percent of his sales, and that's way up from previous years, thanks mainly to the blockbuster films of the past decade. Comix, to the French readers and media, are a legit artform, as respected and beloved as the written word or film. And their comix readers stretch across demographics: young and old, male and female. Mostly they read bandes dessinées, or, as they're commonly called, BDs (pronounced "bay days"). These are what we call graphic novels. French readers love historical BDs, sci-fi, war, westerns, virtually everything save long-underwear schlock. Memoir, which has long dominated indy comix in the US, also seems to be relatively new and mostly comes from imports like MFD. The 24-page floppy has almost no presence here. Nor does, alas, the mini-comic, which, of course, is the format that is transforming American and Canadian comix. Hopefully, they'll discover the latter eventually.

I've long been a fan of French comix, ever since I unexpectedly stumbled upon the debut issue of Heavy Metal at the newsstand in the Summit Mall in Akron, back in 1977. The very mall where Dahmer's Command Performance took place! Heavy Metal brought translations of French comix greats like Moebius and Tardi to US audiences for the first time. It also produced a great transformation in US comix, which were bright and poppy in the late Bronze Age, with a few notable exceptions such as Frank Miller's Daredevil, the Warren mags and the first indy titles. The current dark, apocalyptic mainstream comix, with its mix of hyper-violence and twisted, cynical sexuality can be directly traced back to Heavy Metal. Just not as well done. Confession: I myself had a frustrating, but thankfully brief, Moebius phase during high school. Lesson #1 for any wannabee comix creator: don't try to imitate a genius.

So an invite to Angoulême has always been high on my list, and I've been been looking forward to this trip ever since Serge bought My Friend Dahmer and promised to bring me over for the fest. I rolled into town on a hot streak. Mon Ami Dahmer was the most talked about BD of the past year. It was also the top-selling indy BD in France, and, even better, it was nominated for an Angoulême Prize. Now MFD had been nominated for just about every US comix prize, too (Harvey, Ignatz, Rueben), but had lost every friggin one to Chris Ware and Building Stories. I mean, c'mon, that's not even a fair fight! Building Stories comes with a fucking board game! But… Ware's opus hasn't yet been translated into French, so it wasn't one of the 20 Angoulême Selection Officielle. Still didn't think I was going to win, but at least it wasn't a guaranteed, money-in-the-bank ass-whuppin'!

Angoulême was all I hoped it would be. The Çà et là Collective, a dozen creators from all over the world, about half of whom were Americans, was a great group and we quickly bonded over long signing sessions and group dinners every evening. One of those, Frank Santaro, author of the melancholy and beautiful Pompei and a regularly contributor to The Comics Journal writes eloquently and accurately about our adventures HERE.

Most of us were housed at a 17th-century French manor about 40k out of town. Rooms in town are completely inadequate in number during the fest, especially for such a large group, so visitors scatter far and wide across the surrounding countryside. Serge found a wonderful place in the village of Cognac, where, yes, the drink itself is produced. It was really remote, surrounded by nothing but vineyards for as far as the eye could see. The country road which led there was barely wide enough for the van Serge rented to shuttle us about. At night, I gazed in wonder at a at pitch black country sky full of stars. The only other place I've ever seen a sky like that was in the Florida Keys. Every day we were awakened at dawn by Serge bellowing "It's wake up time!" A breakfast of French bread and coffee and off we went. To work!

The signings themselves were grueling. Here in the States, or in Canada, fans are more than happy with a simple autograph. I spruce mine up a bit and add some drawn elements to my name. But in France, the norm is something called a dedicace, a full drawing on the title page! Once in awhile I do these at US cons, if asked. A-listers, or even C-listers, make a decent living charging for con drawings. But in France, it's expected, and it's free. Some of the guys really went all out. Gregory Benton did a huge, two-page, full-color dedicace in every book! They were amazing. It's kind of fun interacting with fans like that, and they're plenty grateful. Santaro suggested we stand up to draw our dedicaces using a box as a drawing board. It was a great idea. Easier on the back and better to engage fans eye to eye than to have them bending over you.

And, man, did the fans come! Ya know, I've always wanted to be one of those guys that had fans lined up at my table. Never came close to that in year's past, before the graphic novels. I remember my first few cons back in the Nineties, back when The City was my only product. I'd make slow but steady sales of my wares, but most con-goers, especially at mainstream cons, walked right by my table without as glance and I could but stare in awe at the more popular creators and the crowds that milled around them. I remember once at the Mid-Ohio Con I had a table next to Greg Horn, one of the big mainstream cover artists of the era, who specialized in realistically-rendered superhero cheescake. Sort of superhero softcore, really, but the fanboys ate it up. The dude had 30-40 people lined up at his table every second of the day, all snatching up autographed poster prints of favorite Marvel and DC covers. Horn was making a fortune, but his fans often spread out and clogged up the area in front of my table, totally obscuring me from view! I remember one guy leaned onto my table with a sweaty paw on a stack of my books, arching to see what horn was drawing. Another left a giant soda on another stack of my books! I'd politely ask them to queue up away from my table and receive glares and grumbles in return, only to have the line expand like an amoeba a few minutes later and once again block me from passing fans. It just drove home what an obscure unknown I was! I bailed after Day One and drove home, blowing off Day Two. What was the point? So I always dreamed of being one of those guys, with fans lined up in front of my table. In Angoulême, I officially became one of those guys. I signed close to 200 books during the fest. By the time my post-Angoulême book tour was done, I had signed over 600 total! Each one with a dedicace. Ouch. Well, like I said, I dreamed of being one of those guys. 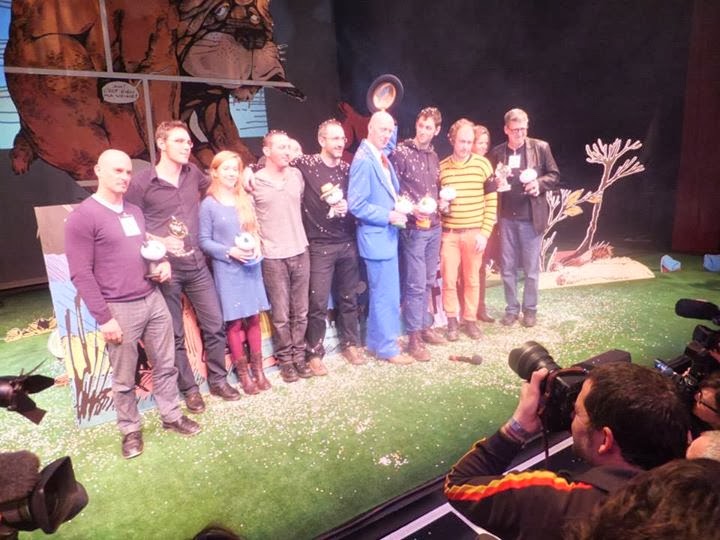 At the end of the event, the 10 winners went on stage for group photos, to thunderous applause from the house. The Angoulême Prizes are a HUGE deal in Europe. Everyone knows about them. It's quite a contrast from ,say, an Eisner or Rueben, which is known in the business and among comix fans, but of which the general population has never heard. I looked out at a mass of about 30 photogs snapping pics like crazy. I felt like a fucking movie star!

The ceremony was broadcast all over the village and in all the tents over loudspeakers, so when I returned to the çà et là booth, my compatriots greeted me with whoops and whistles. I think out of everything, this meant the most to me. Santaro told me when my name was announced, they all danced around the tent high-fiving each other on my behalf. It truly was a moment I'll never forget. It was a week I'll never forget.

And there was still three weeks to go on my book tour! 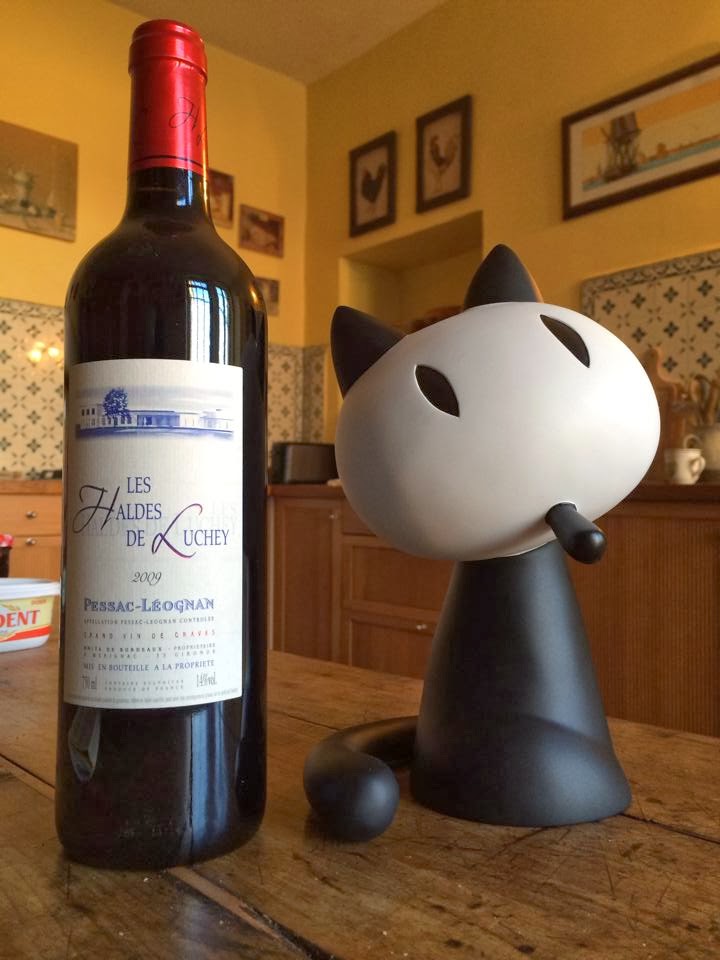