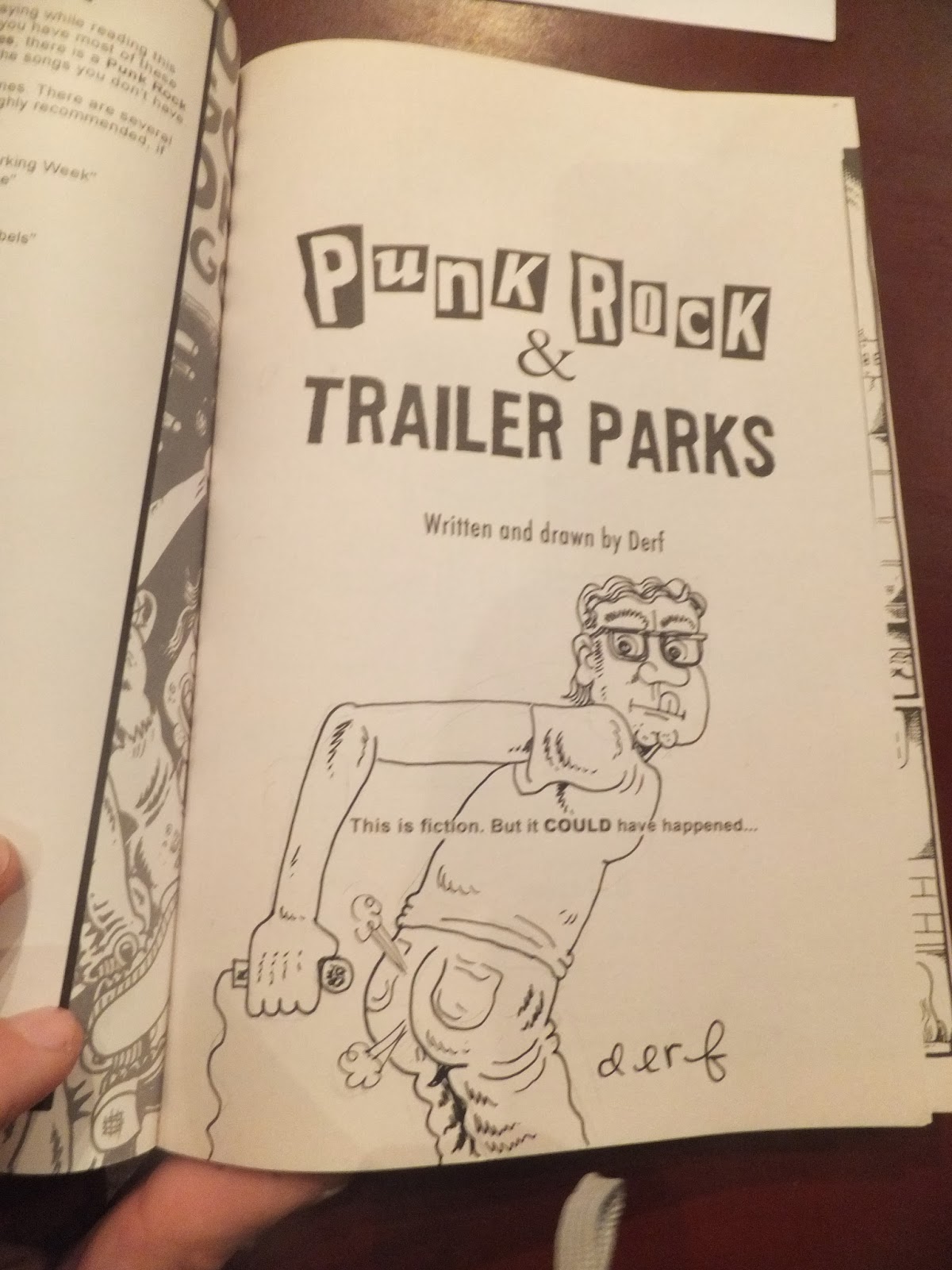 An unexpected thrill to my recent adventures in France was the incredible reception Punk Rock et Mobile Homes received. The book was released right after the Angoulême Fest closed, timed perfectly for my two-week book tour around France and Belgium. It won't come close to out-selling Mon Ami Dahmer, of course, but by the final days of the tour, I was signing more Punk Rocks than Dahmers.

This was great, because I'm sure sick and tired of drawing Dahmer. With Punk Rock, I had the freedom to sketch a variety of characters on the title page– something the French call a "dedicace" and insist on. No quickly scrawled autograph here! A fan (above) requested one of the Fart Tape! 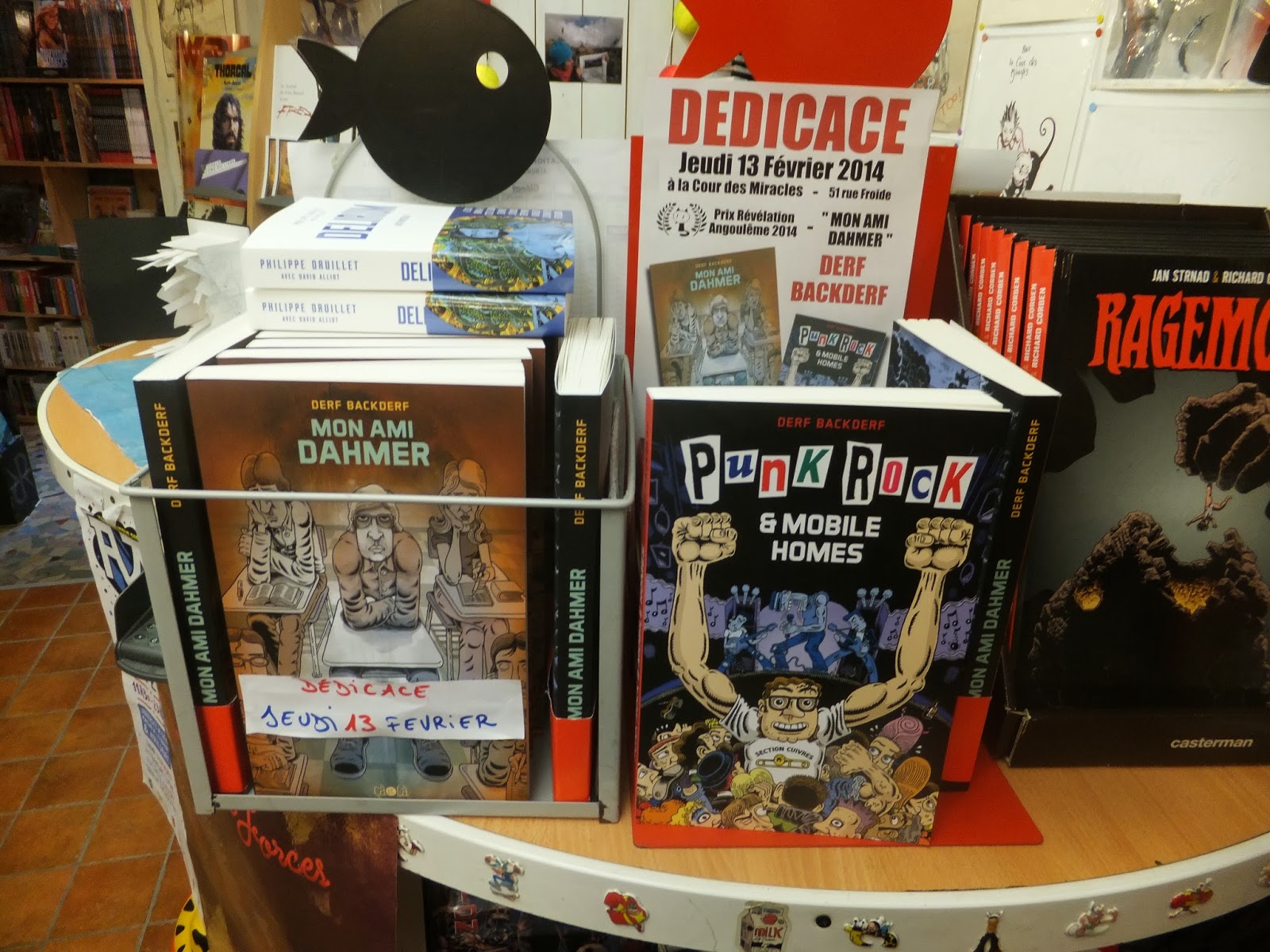 Punk Rock & Trailer Parks came out in the US at the very end of 2008. A little over five years ago. It's a book I'm still very fond of, and proud of, and stands as one of the pivotal works of my career. It was both my comeback and the work that launched me into a new career as a graphic novelist, a change of genres that has brought me far more success and acclaim than my previous career as a comic strip artist ever did.

I wrote PR&TP while recovering from two long years of cancer treatment. I had dabbled in long-form storytelling earlier with the first Trashed and the embryonic My Friend Dahmer stories, both of which received Eisner nominations. So I knew I was on the right track. Then came cancer, and I simply didn't have the gas to take on a major endeavor like a book. Once I emerged, spent but hopeful, out of cancer treatment I decided, for obvious reasons, that I didn't have time to waste. If I wanted to do a book, get to it. And at that time, although I was in remission and the prognosis was good, I was not "cured" and the cancer could well have come roaring back. So I wrote PR&TP, while on vacation with the family, actually, at a lovely lodge in the Cottage District of Ontario, on the shores of Lake Kashagawig-a-mog (really!). This is a special place to me. My parents used to bring us here every year when I was a kid, to a different lodge (directly on the opposite shore from where I stayed this time, so I gazed at it every day). I hadn't been back in 30 years. But the family deserved a nice vacation after the ordeal we'd been through, so I took a chance, found what looked to be a similar lodge to one I remembered as a kid, and booked the vacation. It was a total home run. This was also the place where I first became a comics fiend, when I made a impulse purchase of Fantastic Four #102 at the lodge gift shop in 1970. So this is my personal Mecca, the holy ground where it all began. It's even more sacred to me now, because it's where I re-made myself.

Every day I dragged an Adirondack chair to a shady spot on the water's edge. Stuck a couple beers in the water to stay cool, burrowed my feet into the wet sand and, as small waves gently lapped against my legs, scribbled in the sketchbook on my lap. The kids splashed in the water nearby. I did this for a solid week. It was heaven. What emerged was Punk Rock & Trailer Parks.

It took another two years to complete. It was a creative joy to produce, but slow going as I learned the craft and pushed myself to artistic limits I'd never dared challenge before. As much as I liked doing The City, especially at that time when it was still in 40 papers, before the great newspaper mass extinction, the freedom of a graphic novel, to write as long and as with as much detail as I wished, or as the story dictated, was a rush. This, I thought, even then, is what I should be doing.

Punk Rock & Trailer Parks was released in Fall 2008, on the very day that the Wall St. Meltdown plunged to its depths with the failures and/or takeovers of Lehman Bros., AIG, Fannie Mae et al.  Worst. Timing. Ever. PR&TP landed like a shovelful of wet cement on the sidewalk. No one was buying anything, especially $16 indy graphic novels, as visions of 1933 loomed. The book got great reviews, but died. I didn't make a cent off it.

This has grated on me ever since. This book that I was so proud of, that I believed was a great read, was nothing but a cult fave. Otto and Uncle Elmo deserved a better fate than this.

On the positive side, PR&TP transformed me as a storyteller, so it was far from a wasted effort. There would be no My Friend Dahmer, at least not in the form it exists, without the lessons learned from PR&TP.

And now here we are in 2014, and the comix fans of France and Belgium have made Punk Rock et Mobile Homes a hit! It's already in it's 2nd printing, a mere week after its launch. Sure, it comes hot on the success of Mon Ami Dahmer, the top selling indy book of the past year in France, but hey, I'll make no apologies for good timing for once! The book also received a gorgeous printing from my pals at Éditions çà et là.

Here in the US, Otto's adventures were looked down upon by some as too raunchy and juvenile, which, of course, they are. That was the point after all, because that was punk rock. Critics here, outside of the comix press, tend to be real snobs when it comes to graphic novels. Probably because they, deep down, still think of them as little more than lowbrow comic books, crap for pimply teenagers or flabby, middle-aged losers. I also thought this was a book that had some breakout potential, and one the music press would be interested in. Ha. Wrong! I sent a review copy to every music mag and rock critic I could think of. Nothing but the sound of crickets. Maybe it was because this was a book about the Akron punk scene and not the CBGB's one. We all know how NYC editors and writers feel about anything that occurs out in the sticks. It was the same in 1978 with the music itself! Or maybe it's simply the continued dominance of superhero crap here. Despite the emergence of great indy comics in the US over the past decade, we just haven't shed those old attitudes outside of comix circles. So a graphic novel can only be taken seriously if it's like Maus or Persepolis. That's simply not the case in France, where superheroes have never enjoyed a wide readership, and comix are beloved as a legitimate art form and always have been. They judge a book purely on its merits. French readers are really taken with le Baron, and the punk rock aspects of the story are more mythological to the French, since punk was not the common rite of passage it was in the US or Britain. The top music mag in Paris, Rock & Folk, will be running a big piece on the book. The biggest newspapers have already run articles, and I did interviews on radio and tv.

What can I say? I'm on a roll. And fucking loving it! To paraphrase Elvis Costello, I'm an overnight sensation after 30 years!

Posted by Derf Backderf at 7:32 AM