Why I don't give a shit about Guardians of the Galaxy

You'd think from reading the intertube.... or maybe just my Facebook and Twitter feeds... that Guardians of the Galaxy is the single greatest film every made, that a mere two scenes in the viewer will be transported to a geek nirvana unmatched since the iconic opening scene of Star Wars.

From Disney's standpoint, Guardians is the perfect movie franchise. Not only is it the big hit of the summer, but the history of its creation has so many hands on it that no one guy can claim he's being ripped off, like, say Ditko can with every Spider-man blockbuster. That argument doesn't hold up, of course, but you can understand why Disney is attracted to such a property. 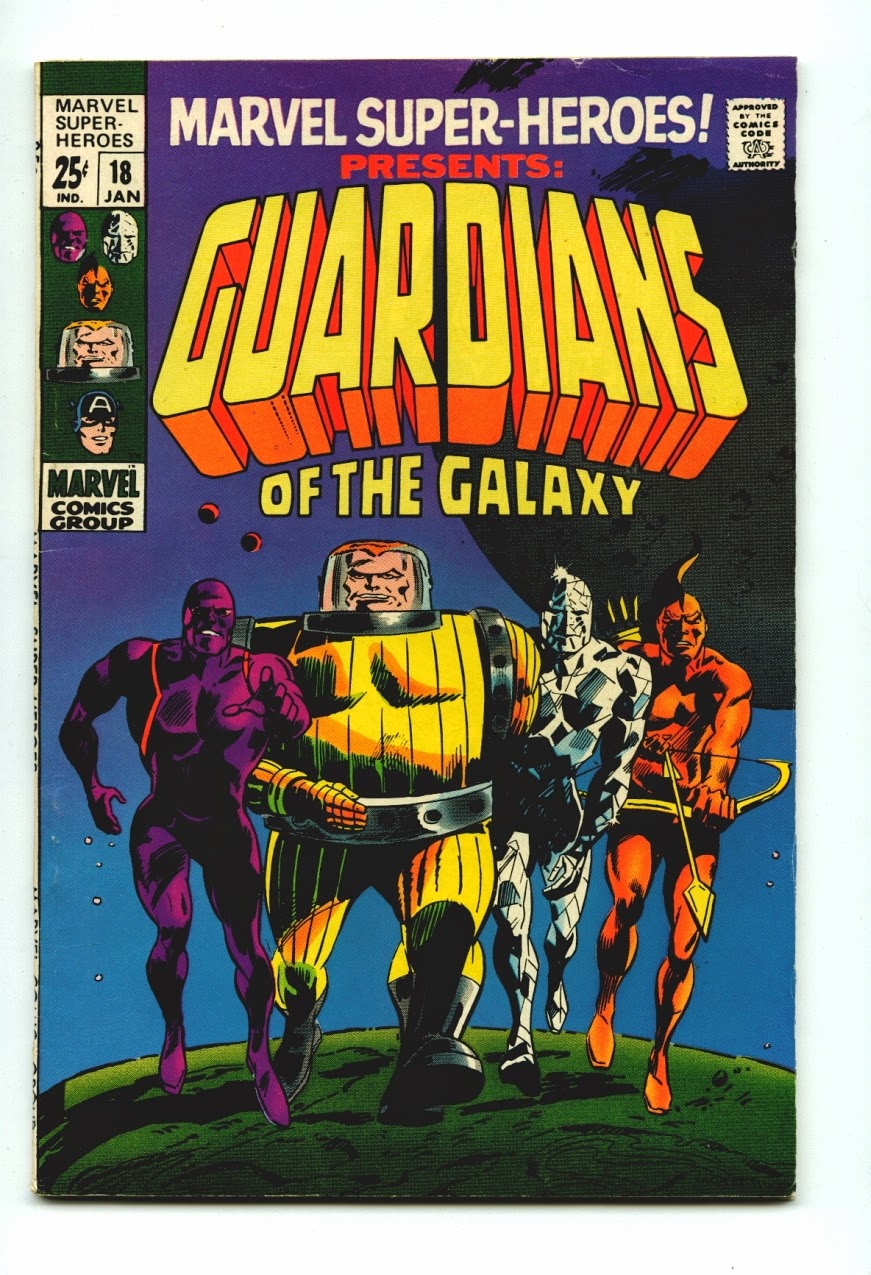 The Guardians first appeared in Marvel's short-lived showcase title, Marvel Super-heroes, way back in 1969. Marvel, freed after a decade from an onerous distribution deal it was forced to sign with DC, its biggest competitor, was putting out as many new titles as it could in an effort to flood the spinner rack and win the comic book war. Those concepts it didn't feel were worthy of solo titles, it tossed into Marvel-Superheroes: Dr. Doom, Phantom Eagle, Ka-zar, that sort of thing. The debut story was written by Arnold Drake, a third-string scripter who got whatever Stan Lee and Roy Thomas didn't want. The art was provided by Silver Age stalwart Gene Colan. It's a cool book, with a great cover. I stumbled across it a year later when I began my comix obsession. Only the Guardians name survived in later incarnations. The original characters were all chucked.

The team appeared sporadically in various titles throughout the Seventies.  It didn't get a regular title until 1990. The characters in the movie are pieced together from the various incarnations. Writer-artist Jim Starlin, who made some of the trippiest sci-fi superhero comix of the Seventies, created Gamora and Drax, the latter with an assist from writer Mike Freidrich, in 1975 and 1973 respectively. Steve Englehart and Steve Gan created Star-Lord, who bears little resemblance to the wise-cracking Hollywood stereotype in the film. Rocket Raccoon was created in 1976 by Bill Mantlo and Keith Giffen. All have been molded, mangled and abused by lesser writers and artists over the years, as only mainstream comics companies can.

Word is– and it's only a rumor, and the details are being kept secret by all parties, for reasons I'll explain– is that Disney is very quietly cutting some...SOME...of the creators in on a piece of the profits. Disney made a big PR splash by giving Mantlo, left an invalid after a horrific traffic accident, a private screening of Guardians and a big settlement. That's great, and good for Disney for doing the right thing, although the cynic in me suspects their marketing wing red-flagged and headed off a potential public relations calamity there.

Starlin, who famously had to purchase his own ticket to The Avengers film, even though his character, Thanos, appeared in the after-credit scene, has announced he's doing more books for Marvel, but it's unclear whether he got a similar deal. No word on the rest. 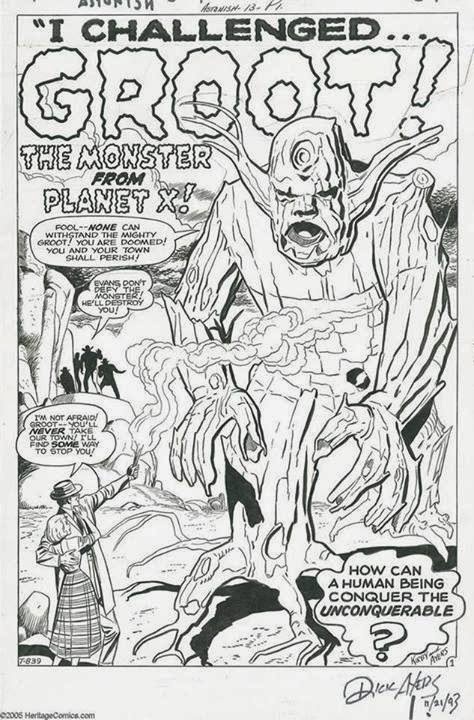 The exception, as always with anything Marvel, is Jack Kirby. He is the creator or co-creator of virtually every major character Marvel has. He was such a genius, even his toss-away bullshit characters have incredible value. Groot, the alien CGI tree, voiced by that great thespian Vin Diesel, was created by Kirby in 1960 during Marvel's pre-superhero, space monster era. Oh, but the Marvel apologists say, so much backstory has been added to Groot over the decades, that there's very little of the Kirby character left. What horseshit. The look is basically the same.  You don't "improve" a Kirby design. Besides, he's a violent, talking tree from space. What's to add? 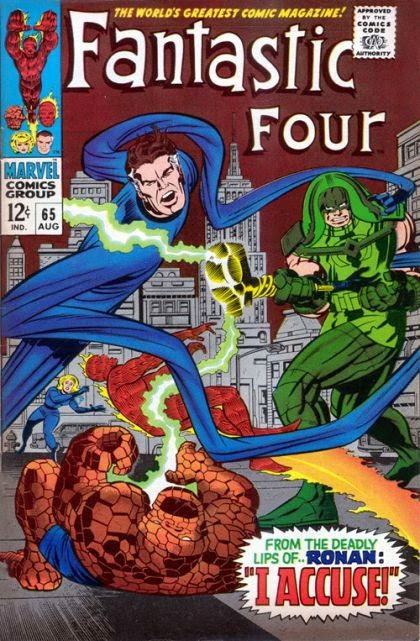 What can't be debated is Ronan the Accuser, the villain of Guardians, and a Kirby creation from his epic Silver Age peak in Fantastic Four. For decades, of course, scripter Stan Lee shamelessly hogged the credit for all these characters, which is now revealed as bullshit. Kirby dreamed up the plots, designed the characters, drew the story and passed it on to Lee to fill in the word balloons, based on notes Kirby wrote on the outer margins of the artwork.  Sound like Lee "created" anything at all in that process? I've ranted about this before, so I won't bore you again. 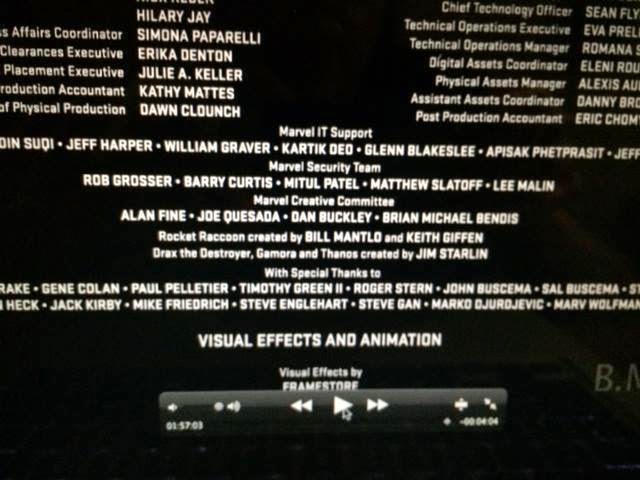 So here's my beef with Disney-Marvel and with Guardians. As the credits roll, the film gives credit to the original creators Mantlo, Giffen and Starlin. After the credits for IT support and security, as you'll note!

Kirby? Creator of two of the films major characters? He's gets a "special thanks"..... TEN NAMES IN!!!!!

Marvel screwed him when he was alive and Disney-Marvel continues to roger him long after he's dead. This is minor compared to The Avengers, true. Kirby is the creator of The Avengers, Thor, Iron Man, the Hulk, Captain America (with Joe Simon) and Nick Fury and SHIELD. The film took in a record $1 billion in sales and didn't give the Kirby Estate... one... single... penny. Disney execs, of course, envision a nightmare where the Kirby heirs successfully seize the rights to all the characters Kirby created, rendering virtually all of Marvel worthless. No Hulk, no Captain America, no X-men, no Avengers, no Iron Man, no Fantastic Four, Silver Surfer, Ant Man, on and on. It likely won't happen, of course, and even if it miraculously does, Disney will simply order its allies in Congress to re-write copyright law. It's done so before.

The financial crime aside.... "special thanks"?

And THAT'S why I won't see this film.

PS-- the after credit scene stars Howard the Duck, created by writer Steve Gerber and artist Val Mayerick. Gerber was also screwed by Marvel, who was sacked by infamous tyrant editor Jim Shooter. He sued for rights to the then hit character (yes, believe it or not, Howard was once a huge hit) and eventually reached a confidential settlement. Gerber's was one of the first ever victories for creators. It never ends.
Posted by Derf Backderf at 12:59 PM