The Story Behind My "Je Suis Charlie" Cartoon 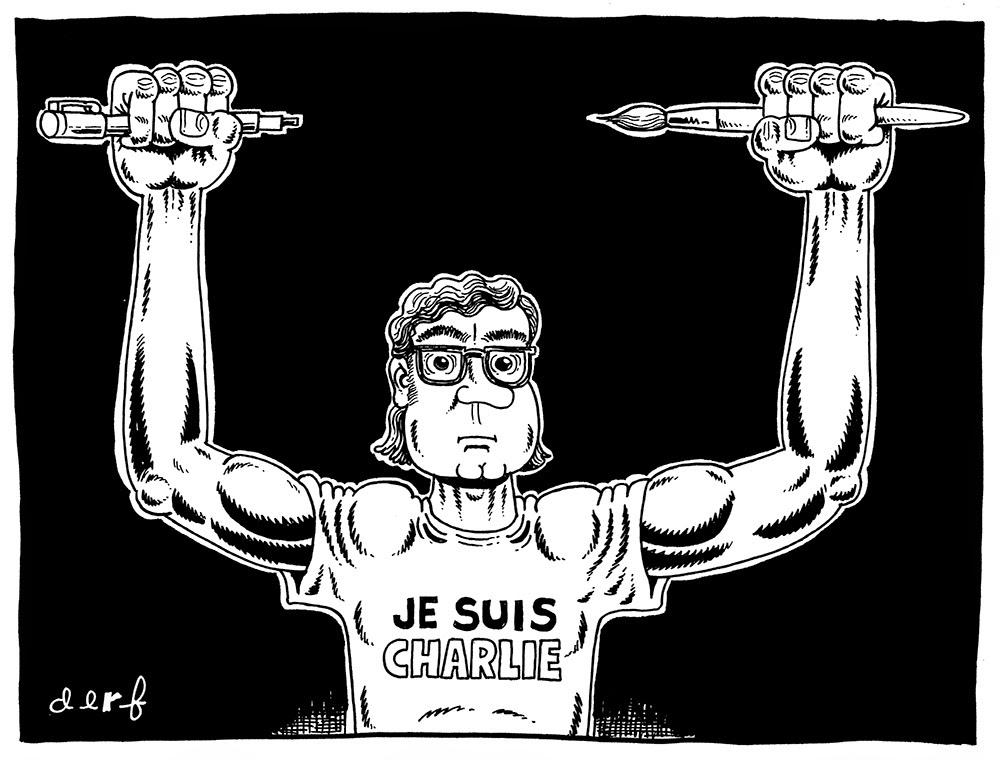 It's been a trying few days. The massacre in Paris hit me harder than any event since 9-11.

If you've been following me on Facebook or Twitter, I've been posting about this all in real time and writing specifically about the issues involved. I won't repeat it here. Instead, I'd like to explain how my Je Suis Charlie piece came together, and what has happened since. It's all been quite incredible, and very humbling.

I'm not friends with the folks that were slaughtered, although I briefly met Stephane "Chard" Charbonnier at last year's Angoulême Int'l Comics Fest. It was no more than a passing introduction and a handshake and smile. But these were colleagues, who did the same type of cartoons I drew for two decades. We're a small brotherhood. I lost some of my own, men and women killed for ideas, by sociopaths who are obsessed with their cult of death. I cried that day.

Throughout the ordeal, as the hunt for killers went on, I was in contact with my colleagues in France, specifically those at my publisher Éditions Çà et Là. You can imagine what they were going through, but, despite the threat of further terrorist attacks, the staff was heading out that evening, mere hours after the attack at the Hebdo office,  to a rally at Place de la République, organized through social media by the comix and literary communities of Paris. I watched it unfold online as thousands flooded the grand plaza.

Place de la République is the heart of Paris. The hotel I often stay at during my trips (three in the past year) is but a few blocks away. I've walked across that plaza 100 times at least, since the metro stop is directly below. Seeing the familiar streets cape and the monument that dominates the plaza, and the thousand and thousands of Parisians holding aloft handmade Je Suis Charlie signs or, even more moving, drawing implements, in a simple courageous act of defiance, was very emotional. I knew then I had to draw something.

I wasn't interested in drawing a political statement. I drew political cartoons for years, first in college at Ohio State, then as a pro from 1984-1989 for a crappy paper in Florida and (against my will) as the 2nd-string political cartoonist for the Cleveland Plain Dealer. Then again from roughly 2001 on in my comic strip The City, as it morphed into a political cartoon after 9-11. But I hung it up a year ago when I retired the strip in favor of a full-time career as a graphic novelist.  Like an aging ballplayer, I couldn't go back.

What I wanted to do instead, was pen a tribute to my fallen comrades, and to the concept of free expression, to which they gave their lives. The images of the day, particularly the drawing tools held aloft, immediately came to mind. Who better to hold them than Otto, my protagonist from Punk Rock & Trailer Parks? I felt the image of the lead character of a bestselling book.... and PR&TP is, magically, one of the top-selling indy books of 2014 in France... would resonate with french comix fans. They absolutely love "le Baron!" It's one of the most surprising and wonderful things that's happened to me. This was my meager way of giving something back. The pose in the cartoon, of course, mirrors Otto's pose on the cover of PR&TP. I toyed with drawing the entire cover, with the joshing crowd surrounding Otto now staring out and holding drawing tools. But it was very late and I was fast running out of gas, so I opted for the simple lone figure and the black background.

I drew it in half an hour, and posted it on my publisher's Facebook page. It quickly started flying around French comix sites. The Angoulême Festival featured it on their site. French newspapers and magazines posted it. Éditions Çà et Là replaced the home page of its website with the cartoon. Messages of thanks poured in from French fans. More tears. And then Liberátion, the national newspaper that volunteered to take over the publishing of Charlie Hebdo, since, with most of its staff murdered and its offices and computers riddled with bullets,  Hebdo could not produce a weekly magazine on its own. The next "issue" would print as an insert in Liberátion and the editors decided to run the tribute cartoons, including mine. The spread at the top of this post is from this insert.

I never imagined the response would be like this. I am truly flabbergasted, and humbled, and very proud to be a part of it. I leave for France and the Angoulême Fest in two weeks. I imagine this will be a very emotional trip. I can't wait.

Nous Sommes Tous Charlie. We are all Charlie.

Posted by Derf Backderf at 9:31 PM