The Year to Come

Wow. What a year 2014 was. Be hard to top it. I approach the new year as I have the previous 30 of my career; keep my head down, keep pounding away and the rest will take care of itself. 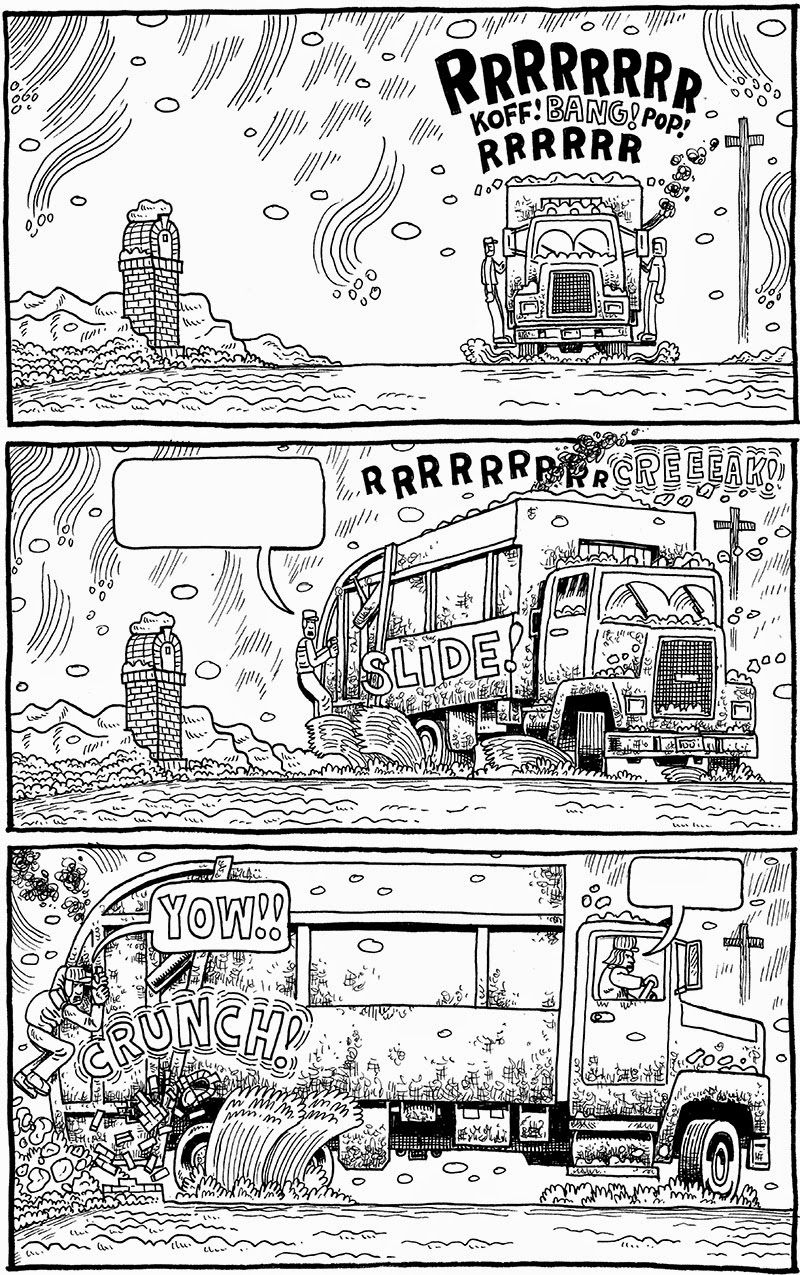 The big one, of course, is the release of my next original graphic novel, an all-new Trashed, due to hit the stores in August or September or thereabouts. Putting the finishing touches on it right now.

Fans of the original– my Eisner-nominated, first attempt at long-form storytelling– won't be disappointed. It's the same mix of small-town weirdness, bizarre characters, shit job antics and the hilariously nauseating details of life as a garbageman. This book has more in common with my later webcomic, which no one really read, like most webcomics, than with the original memoir from 2002. I brought the story up to the modern day, and it's no longer memoir, it's fiction. Gives me more freedom as a storyteller. In fact, this book will pull together the two webcomic episodes I previously posted (before the release of MFD put it on hiatus back in 2012) and add the three new episodes I had written but hadn't yet produced. It's the sprawling epic I envisioned making over several years, in one big 240-page tome.

This book came about when I was talking to Charlie, my editor at Abrams, about new book projects. It'd been two years since My Friend Dahmer launched and they were anxious for me to make another book. So was I! But I had set aside all of 2012 to promote that book, and then 2012 turned into 2013, and then 2014.... and I was still promoting that book! Time got away from me a little bit.

I decided to ease back into writing in summer 2013 with another Trashed webisode, just to shake the rust off.  OK, it wasn't like I wasn't doing anything. I was still, at the time this all came down, cranking out my comic strip The City, although that was becoming ever more frustrating to write and draw. I lost my biggest client paper when the Cleveland Plain Dealer threw itself on its sword, cut back from daily publication to four days a week and laid off a third of its staff.  That was the final straw and I made the difficult decision to shut the strip down at the start of 2014.  I was pretty sick of doing it anyways, especially with other projects beckoning. When I mentioned to Charlie I was going to do another Trashed webcomic episode, it was he who suggested, whoa, why not do that as a book? The more I thought about it, the more I liked the idea. First of all, I love the characters and the story. It's fun to draw and fun to write. It's also something I've had success with in the past and, following an international smash like MFD, it's a huge challenge to deliver a follow up, since anything will be compared to MFD. And, quite frankly, I'll never have a book like that again.... because there isn't another book like that! So why not just come back with a strong book that's a proven success? Made perfect sense to me! Besides, it was already mostly written!

Naturally.... me being me.... I had to re-draw the first two episodes to make the whole story look seamless. That led to my workaholic Fall; four months of 14-hour days, 7 days a week. But now it's in the can and I think it's a strong book. Charlie proclaimed it "a masterpiece." Haha... I doubt that! In truth, I can't tell anymore. I've worked on it too long. But I think people will enjoy it, and it'll get the "what next?" monkey off my back. The nice thing is my following is about 100 times bigger after MFD. I saw the benefit of that when Punk Rock & Trailer Parks was released in France after MFD and rocketed up the bestseller list. Didn't sell squat here in the States when it was published before MFD.

First up in 2015, however, is another month-long European book tour in February! I'm off to the Angolême Int'l Comics Fest, then a week at a book fest in Provence (where Mon Ami Dahmer is up for another prize), then a week of signings around France and then off to Amsterdam for the launch of Mijn Vriend Dahmer. 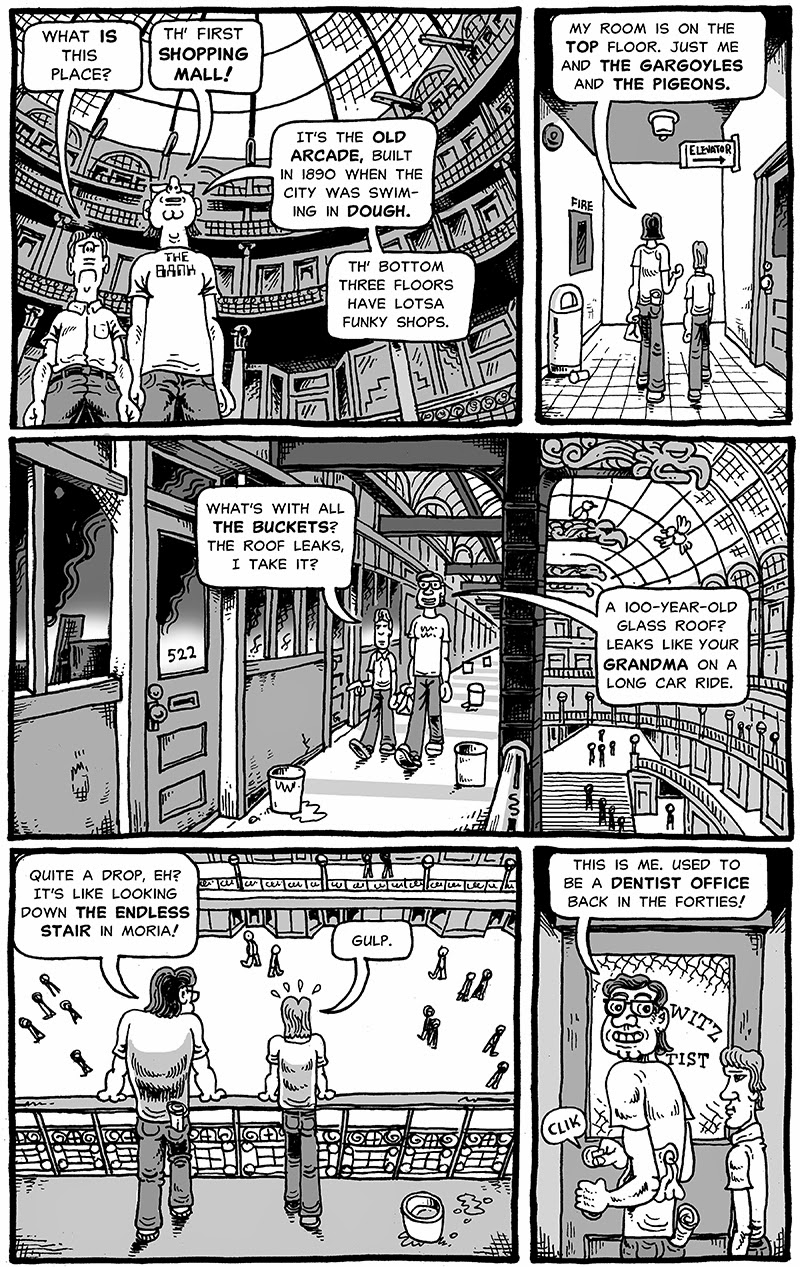 When I return, I'll at long last fire up The Baron of Prospect Ave. webcomic again. This is the substitute, rust-shaking project I concocted after Abrams claimed Trashed. I got 11 pages of the first chapter posted before I had to shelve it for the Trashed deadline. I'm itching to get back to Otto and this story, especially since I left it with a cliff hanger. Who is the mysterious person in Otto's room? I have lots of ideas for this tale, which eventually will be turned into a full book. It's a pure labor-of-love side project, and we all need those. Much like I did with Punk Rock & Trailer Parks and the much-loved punk scene in Akron, I've pegged this tale on another fond part of my past: books. Specifically, the paperback book culture of the late Seventies and the legendary Kay's Bookstore in downtown Cleveland. I'll be pulling all sorts of stuff into this story, including punk rock and downtown crazies and porn kings and, yes, even a serial killer! All will be revealed in time.

My plan is to post a full chapter, maybe 30 pages or so, for free, then run a Kickstarter to fund the rest and then find a publisher who wants the book.

By summer, I'll also start writing my next graphic novel. No hiatus this time. I have a few ideas, but nothing I'm ready to announce just yet.

I also have reached verbal agreement with a couple indy comix legends to work on compilation books they'll be producing this summer. That'll be fun.

Then come the Fall, the Trashed book tour kicks off. I've already agreed to be a featured guest at SPX, which is always a highlight. Looks like I'll be returning to the fabulous Miami Book Fest, too! Hopefully, I'll also be a part of the new comix fest at the Ohio State Cartoon Museum in November.  That would be very cool.

In between promotional jaunts, I'll be wrapping up the pre-press work on True Stories: Volumes 2, 3 and 4. Those will all be coming out every two months starting in Spring 2016 from the fine folks at Alternative Comics. Maybe Volume 5, too. We'll have to see how much material I have. I'm very pleased at the reception Volume One received. It validates the 24 years I poured into the comic strip. Makes me feel very good, especially to bring it to readers who weren't familiar with my semi-obscure strip.

And, there could well be some big news with the My Friend Dahmer film. The screenplay was just named one of the hottest circulating in Hollywood. It's not something I'll have an active hand in, other than providing the source, but a great film can only help my comix, so fingers crossed.

So all in all, I have more on my plate than I can handle in the coming year! From here on, I want to have several projects in various stages, so I never go 3 years between published works again.  I wish I was faster. Shit man, I want to produce as much work as I can in the time I have left. With my medical history, who knows how long that is? I don't worry about it, but I do feel a sense of urgency to make as many comix as I can. This is the downside of  not emerging until age 50. I wasted three decades of my career on other things. Well, ok, not wasted, because I had a lot of fun making a comic strip (for the most part) and, before that, I loved the beginning of my eight years as a political cartoonist, even if the last five years were an ever-bigger drag, and I did some good work in both those genres. I can't regret that stuff, because I wouldn't be the creator I am now if I hadn't done those things.  Still, it's hard not to wonder what if....?

But that's the past. All I care about is what's next. I'll live as large as I can. Work 'til you die! Should be a fun year.

Posted by Derf Backderf at 4:26 PM