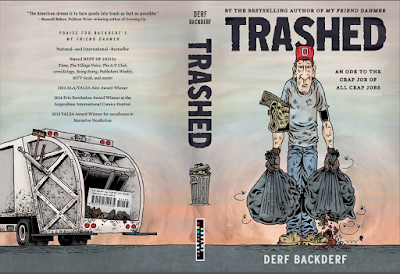 I'm happy to report that Trashed is delivered and in the can. All 240 pages of it. Took a bit longer to put the finishing touches on it, as it always does, and MAN am I sick of looking at these pages, but it's completed at last. Here's the wraparound cover (above). I especially like how designer Pam Notorantonio tucked the barcode right into the truck's hopper.

I'm recently returned from Book Expo New York and the American Library Association convention in Frisco, where I passed out crappy proof copies like candy.

And the first review is in! Damn book isn't even printed yet, and Kirkus Reviews gave it a "starred review"! That's not one star, like a movie critic would give to a lousy film, that's starred as in "we like this book!"

"Indie comics stalwart Backderf returns to the scabrous humor and pointed commentary of his earlier work. A one-time garbageman himself, Backderf has a clear affinity for these hardworking stiffs and their travails. An entertaining ode to the odiferous realities of getting by."

Heidi MacDonald at Comicsbeat also declares Trashed to be "hilarious and disgusting."

And these are based on the positively dreadful, mistake-and-typo-ridden proof copy. Abrams was in such a rush to get it out by these two events, they just used my first draft. I hadn't even spellchecked anything, which is painfully obvious, as I have apparently lost the ability to correctly spell any word longer than two syllables. I'll be building a bonfire out of any copies remaining once the real book comes out. That'll be the end of September (I hope). 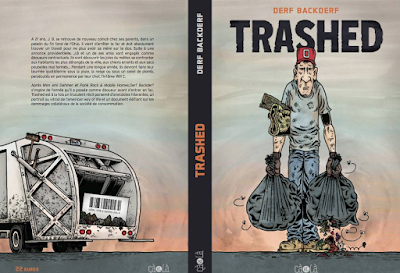 Here's the cover of the French edition, also due in September.

So now I can kick back and enjoy the rest of the summer with some well-deserved time off, before the Fall book tours both here and in Europe. No plans, other than firing up The Baron of Prospect Ave. webcomic again. Look for new pages shortly. I'll also be pondering my next book. I have a few ideas, but nothing I'm willing to share at this point.

FYI Punk Rock & Trailer Parks is no longer available from the SLG Comics online store. The book will continue to be re-stocked at Amazon however. I usually discourage people from buying Amazon, but there's no other option here, so have at it. From a purely selfish standpoint, the Comixology download is even better, because I get a quarterly royalty from them!

Posted by Derf Backderf at 5:07 PM