The End of "Best Editorial Cartoons of the Year" 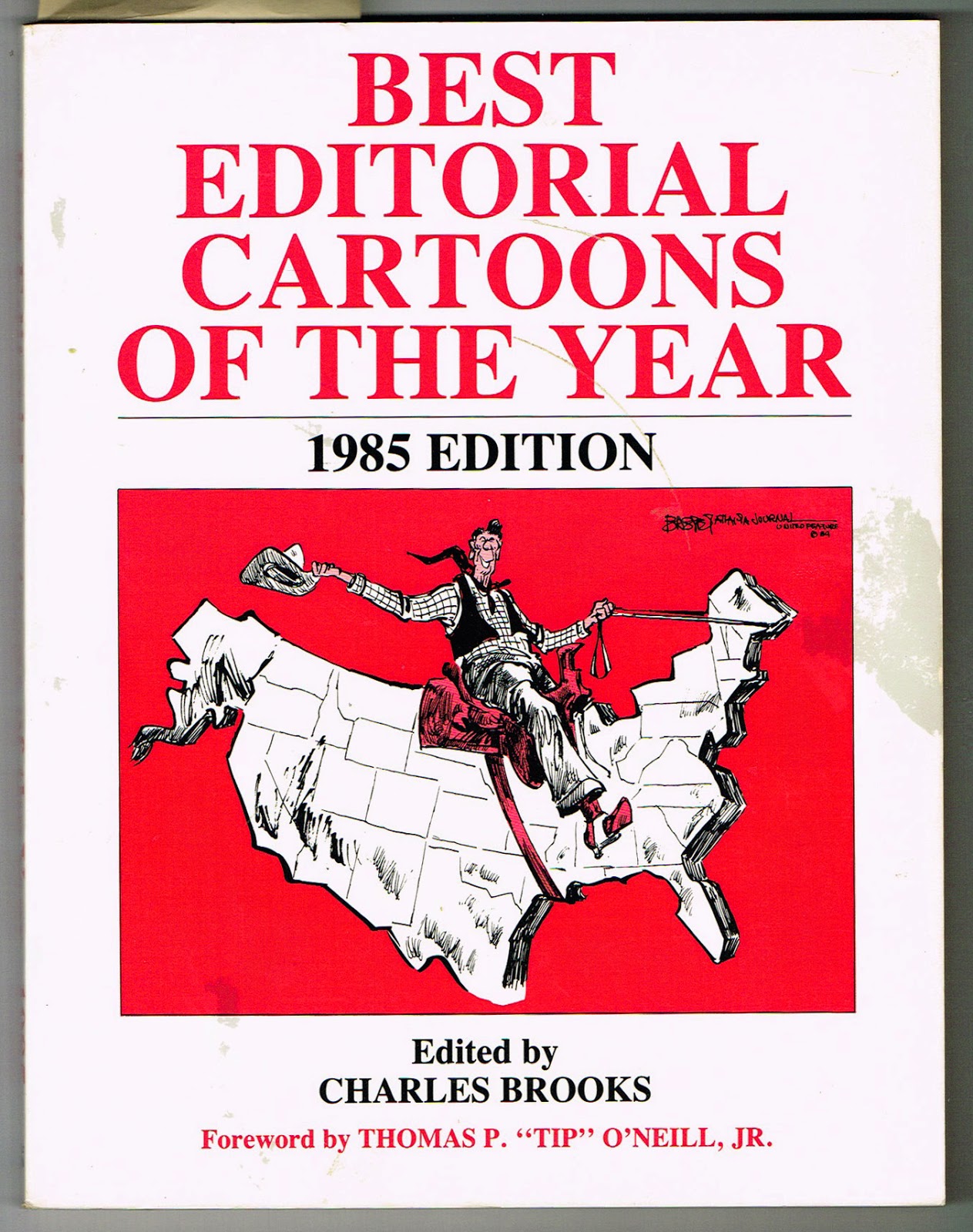 Posts like these are akin to kicking around the rubble years after a building has collapsed,  but I feel it's worth some thoughts. Pelican Books has just announced it's canceling its annual Best Editorial Cartoons of the Year series after 42 years. The 2015 edition will the last. Above is the 1985 edition, the only year one of my cartoons made the cut, in my brief, frustrating career as a mainstream political cartoonist. Gad, it seems like a lifetime ago.

Never heard of this book? Yeah, not surprising, but once upon a time, BEC was the biggest release in the political cartoon world. Every bookstore carried it and political cartoonists longed to be featured in its pages. Get 4 or 5 cartoons in an edition you were a big deal. Get only one in and it was a source of much grumbling.

The dude behind BEC was Charles Brooks, an old-school, veteran cartoonist from Birmingham, AL, who pitched the series to Pelican in 1969, when he was President of the Assoc. of American Editorial Cartoonists. Brooks felt political cartoons needed a showcase tome. The AAEC was a big deal back then, several hundred strong, with a lot of clout. Presidents would come to their conventions in DC to deliver keynote addresses! Brooks himself was a lesser light of the Herblock School- heavy on the grease pencil, slap a label on everything, strain those visual metaphors, and jokes? What are those? He edited this series and selected the cartoons, so even though he was a pretty minor cartoonist, this role elevated him greatly in the field. Here's one of his typical cartoons. Real knee-slapper, huh? 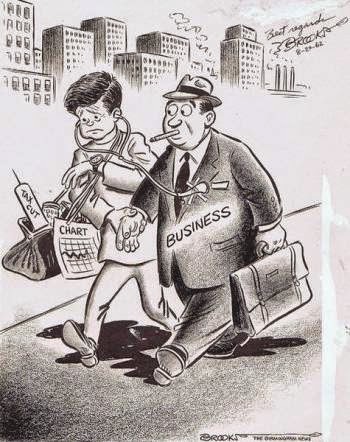 Brooks edited the series until the 2012 edition. He passed away at age 90 while working on it.

When I began my political cartooning career as a college scribbler at Ohio State University in 1981, I immediately snapped up a copy of the newest issue the day it was released. All the university bookstores carried it! I pored over the cartoons, studying them, and noted who was doing interesting work. What I noticed right away, though, was, man, a lot of these guys really stink. 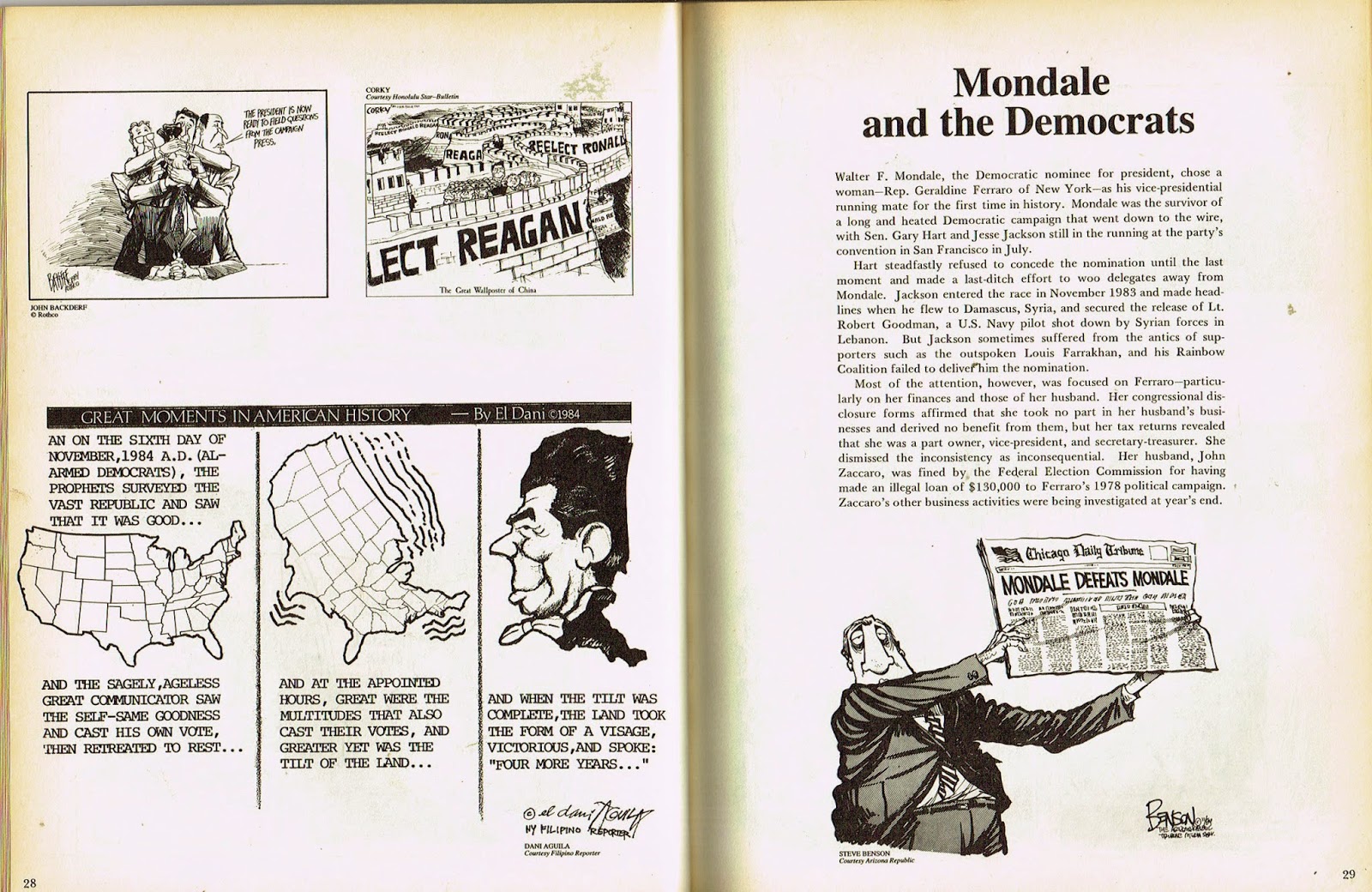 And then in 1984, I "made" it. There's one of my cartoons, upper left, printed the size of a matchbook. It was a pretty minor honor. Every member of the Assoc. of American Editorial Cartoonists got at least one cartoon in BEC, and I had just been accepted into those ranks. One small cartoon? That was Brooks telling me, sorry, kid, you're nothing special. Hard to argue that at the time.

I loved drawing political cartoons in college. I was full of idealism, dug the notoriety and big-man-on-campus fame and naively believed cartoons could change the world. Haha. To quote Bugs Bunny: "Wotta maroon!" A few years as a pro working for cowardly assholes took care of that. By the time I got to the Plain Dealer, I was done with political cartoons. I wanted out.

Not uncoincidentally, the mid-Eighties, when I made BEC at last, was the tipping point of the genre. The biggest political cartooning stars were newspaper royalty. These guys were some of the highest paid people on staff. They were celebrities, feted (and feared) by politicians and power brokers in their own cities and even, for a few of them, in DC. Note who penned the introduction in the 1985 annual above. It's Tip O' Neill, the longtime Speaker of the House! His office wall was covered with political cartoons. That's what it was like to be a political cartoonist during the genre's heyday. Alas,  that was pretty much over.

Let's take it back in time a little bit.

The old guard, the generation of Herblock and Bill Mauldin, came of age after WW2. You can trace their lineage straight back to Thomas Nast, the guy who invented the political cartoon. Oh sure, there were others, but Nast was the main guy. Besides, the dude also invented Santa Claus, so let's not quibble over his legacy! Herblock took on Joe McCarthy and the Red Baiters. In fact Herblock coined the phrase "McCarthyism," which is still used today. Mauldin went after him, too, and also pounded away at Segregation. Both were hot-button issues in the Fifties and it took brass balls to stand up to political pressure, death threats and smear campaigns. But stand up they did, backed by fearless publishers and editors.

After Herblock and his many imitators, came a new generation, one that arguably produced the finest political cartoons ever. At the dawn of the Sixties, Pat Oliphant and Paul Conrad emerged  Then along came Don Wright and Jeff MacNally and a host of others. These guys avoided the labels and humorless metaphors for savage gags and hilarious caricatures. The grease pencils, conté crayons and stipple board were abandoned for (then) modern illustration techniques like ink washes, Zip-a-tone halftone screens and Duo-shade paper. The new breed were more influenced by Mad magazine than by Nast. 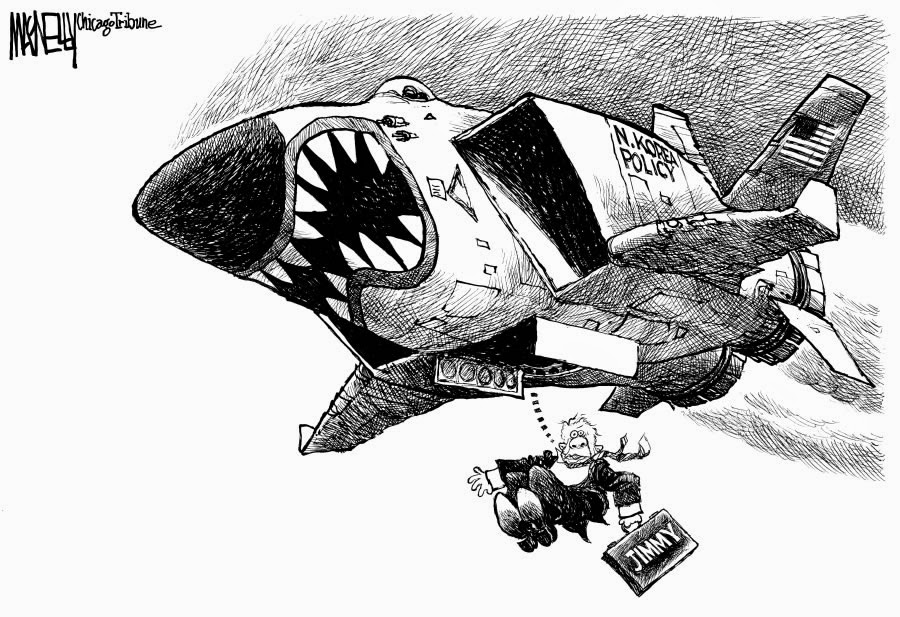 Unfortunately, as often happens, following this artistic revolution there was a great rush of lesser talents into the field, inspired by Oliphant and MacNelly, but possessing a fraction of their talent and vicious wit. They were known collectively in cartooning circles circles as "MacNelly Clones." MacNelly, by the end of the Seventies, had become the most widely reprinted political cartoonist in the world. His stuff looked great, and his moderate-right politics were easy to swallow, especially as the Reagan Era dawned. The Clones drew like him, they wrote like him, they lettered like him... some of them even aped his signature! But they lacked his brain. What resulted was an avalanche of derivative political gag-of-the-day cartoons, that said little and offended no one.

At the one AAEC convention I attended in 1984, there was a school of acolyte Clones that followed MacNally about, like pilot fish swimming after a great white shark. This was the topic of much snarping among the other cartoonists, many of whom were MacNally Clones themselves. It was all a rather nauseating display. Editors, however, loved the Clones. This is what a political cartoon should look like, to their minds, because what they saw in other papers and reprinted in Time and Newsweek was MacNally. Even better if a cartoonist doesn't lob bombs, so the editor's sleepy mornings and 2-hour lunches aren't disturbed. Everybody's happy.... except the readers, of course, and there were fewer and fewer of those to worry about. And so the genre lurched to a dead stop. And there it has remained.

Oliphant famously groused, well into this trend, that true political cartoons had been "replaced by a frozen assemblage of sausage-fingered, big-nosed, giggle panels.”

Why? Because something else was happening in the newspaper biz. In the Eighties, all the family-owned newspapers, and some were the most respected papers in the country, were being sold, one by one in rapid succession, to giant media conglomerates. Where once papers were run by local press barons who were deeply invested in their towns, they were now run by a faceless corporate board in some other city that only cared about the bottom line. Where once an editor was a local boy who had worked his way up from copy boy and cared passionately about the city and its politics, an editor was now a corporate flunky, interested only in clawing his way further up the hierarchy. And the last thing a guy like that wanted to do was spend all morning answering angry phone calls about some damn cartoon!

The Corporate Flunkies' solution was to hire wimp cartoonists. The Clones fit the bill perfectly. Guys who could ape MacNelly's drawing style, but said nothing in their cartoons. The Herblock Era guys died off, the distinctive cartoonists of the following  generation either retired or also died off (MacNally passed away in 2000) and soon all that was left were wimpy Clones, all drawing basically the same cartoon. Oh, there were a handful of guys doing good, distinctive worth, say Kal at the Baltimore Sun or Joel Pett in Lexington or Tom Toles, who took Herblock's chair at The Washington Post, and a few others, but 90 percent  were indistinguishable from each other. This reached a sad pinnacle the day after 9-11, when dozens of the Clones drew the same damn cartoon- the Statue of Liberty weeping into her hands as the Towers burned behind her. Never before in the history of political cartooning had this happened on such a scale. It's a stupid cartoon idea anyways, and not an original one. Mauldin's Pulitzer prize winning cartoon after JFK's assassination showed  the statue of Lincoln in his memorial, with his face buried in his hands. Plagiarism? Maybe. Unoriginal? Definitely.  That the same lame cartoon was repeated dozens of times was a sad indictment of what corporate groupthink had done to a once-important genre.

After 1985, great political cartoons were mostly found in free weeklies, which carried the groundbreaking and no-holds-barred work of people like  Tom Tomorrow, Ruben Bolling and Matt Groening, to name a few, guys who were making smart and distinctive cartoons that, in my opinion, rank among the best ever created. These cartoonists, however, were never included in BEC. The book became a joke, a lame collection of dinosaur cartoons.

Today there are only about 40 full-time political cartoonists left in newspapers, down from a high of 275. It's a dead genre. The MacNally Clones, who are still in their forties or fifties, have mostly been laid off and are either posting online at a bad-cartoon clearing house like Cagle Cartoons, or freelancing for some rag for a pittance. Being sacked hasn't set any of these guys free. They're still pathetically copying MacNally, and the dude has been dead for 15 years! The cartoonists who have managed to hang onto their positions will probably get the boot in a year or two, if newspapers continue their slide, which they will. The few that are lucky enough to keep their jobs until they retire, won't be replaced. Thank God I bailed when I did. I can't imagine where I'd be now if I stuck with it .

Few people read political cartoons anymore, magazines and newspapers seldom reprint them, no one gives a shit. The genre is dead in this country. It doesn't have to be. I don't blame the Clones for this demise. I blame the dopes who hired them, the Corporate Flunkies who emasculated a storied art form because provocative content just wasn't worth the bother.

Now in other countries, political cartoons are alive and flourishing. And my free weekly brethren are still at it, even though free weeklies are also sinking fast into the tar pit. Tom Tomorrow and Ruben Bolling and Matt Bors, etc., have morphed into web cartoonists. Their work is better than ever.

Legendary newspaper columnist H.L. Mencken said, “Give me a good cartoonist and I can throw out half the editorial staff.” The corporate douchebags who are riding newspapers into oblivion, like Slim Pickens whooping astraddle the a-bomb in Dr. Strangelove, did Mencken one better. They threw out the cartoonists and half the staff!

Can't say I'm sorry to see Best Editorial Cartoons of the Year go.  It perpetuated the norm and highlighted the bland, and trained both cartoonists and editors alike that this was what political cartoons were supposed to be, right up until the point that no one gave a shit anymore.

Posted by Derf Backderf at 9:38 PM