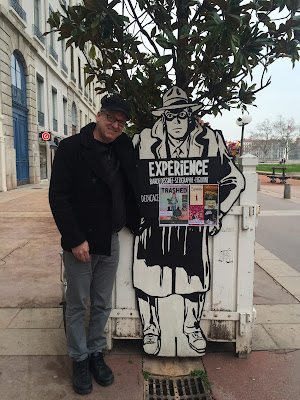 Didn't post as much from my grand 5-week-long tour through France and Belgium as I had planned. I didn't have a lot of down time, frankly. What a tour! Four days at the Angoulême International Comics festival, followed by a month traveling from bookstore to bookstore all over France (with three side trips to Brussels). Twenty-two signings in all! My only day off was Sunday. 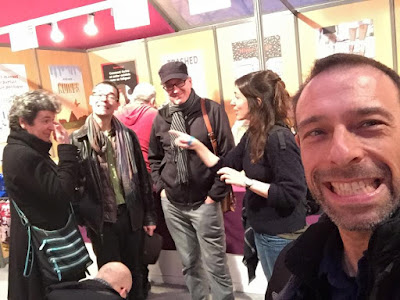 Hanging with friends, old and new,  at the Angoulême Comics Fest.Gregory Benton leers his approval. 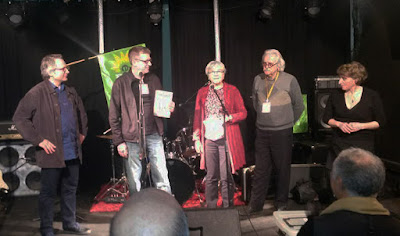 The Green Party of France pick Trashed as their book of the year!
The ceremony was great fun. They gave me a flag and
several rounds of shots! Now THAT'S an award!

The tradition in France and Belgium is to give fans a "dedicace," a drawing on the title page. Including the long lines at Angoulême, I estimate I did over 1,200 of these things on the tour! That's a LOT of drawing.

It wasn't as grueling as it sounds. I have four standard poses I used for Trashed dedicaces, and I could swap in the different characters. Got pretty tired of drawing garbagemen, to be honest. For My Friend Dahmer I have two poses. The Punk Rock & Trailer Parks ones are more wide open. I usually ask for a request. Joe Strummer is the most popular, followed by Joey Ramone. A typical signing usually last three hours and around 35 dedicaces. Once in awhile, I'd get a weird request. "Draw me as a garbageman. Draw Joey Ramone as a garbageman." Those were fun. One guy, a classics prof, wanted the Greek philosopher Dionysius as a punk rocker! 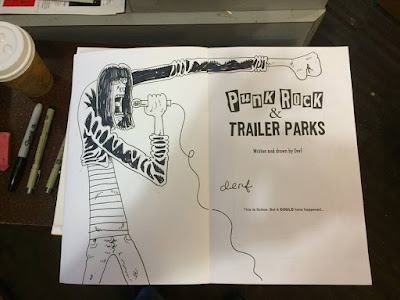 A typical dedicace in an English edition of PR&TP. In the States, I'd charge for a
drawing like this and no one would complain. In France and Belgium, it's expected and it's free. The price I pay for all those fabulous free meals! 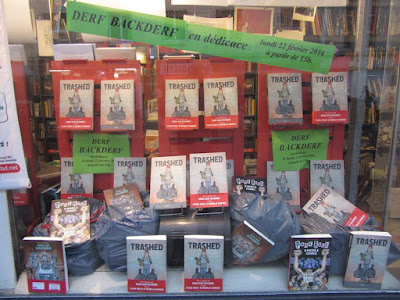 Everywhere I went the fans were great. Big smiles and warm greetings. I was amazed at how many had boned up on my career and biography. At times, I just shook my head and wondered "how the hell did this happen?"

My French publisher couldn't be happier, of course. "Your sales are right up there with Clowes and Burns and Ware, he told me." Again, I shook my head and laughed. Heck, all of us dream of being an A-lister. Here in the US, I've managed to claw my way up to B-minus-lister, but in Europe, I'm living large. That dipshit smile plastered on my face in these photos isn't fake. I'm well aware how fate has smiled on me here. 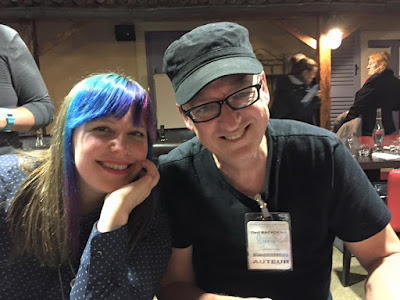 Hanging with the mighty Jen Vaughn!

If this turns out to be my career highlight, yeah, I can live with that. I've had a new book come out every year in French since 2013. It'll be a while before I have a one, so maybe I'll fade from view. If that's the case, man, it's been a helluva ride.


So what's up for the rest of 2016? Well, I have my little side project, The Baron of Prospect Avenue webcomic. I'll be posting new pages throughout the year. I wrote the rest of it, mostly on trains. It needs a little tightening, and maybe some rewrites, but I know where it's going. Originally I started it without having it plotted out, as a storytelling experiment. I scrapped that. Just wasn't comfortable working that way. So now it's another three-act plot. But it's a labor of love and I plan to have fun with it. Eventually, this will be a book, probably sooner than later. Trashed started as a webcomic side project, too, remember, and I only got 50 pages in before Abrams snatched it up. The Baron, however, is too bawdy for them, I think. And I want to keep it bawdy.

Next up is a new project for Abrams. Don't know what yet, but I'll be devoting some serious reflection this Spring to this. I have some ideas. 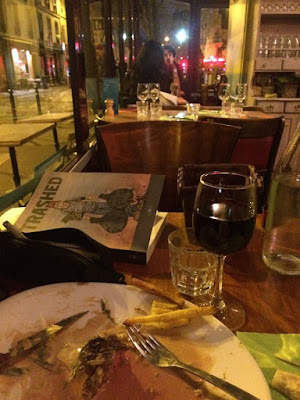 As for cons and fests, I plan to limit the travel this year so I can concentrate on work. Here's the list so far. Subject to change, of course: 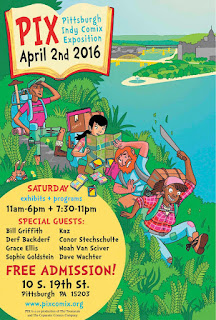 Posted by Derf Backderf at 8:43 PM