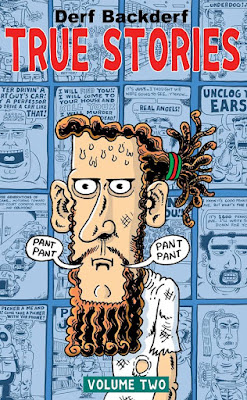 At last! The second volume of my True Stories series will be released in July by the fine folks at Alternative Comics. A fat 48-page floppy. $5.99 cover price.

Volume 2 is comprised of stories from 2009 to 2014. These were, of course, the heart and soul of my long-running comic strip, The City. I often am asked if there will be a complete collection of all 24 years of The City. The answer is.... no. A lot of those strips simply don't hold up. Too topical, too of their time. But the True Stories are timeless. That's why I'm collecting these. A lot of my old work make me wince, but not my true stories. I read these, even the ones that aren't very well drawn, and I remember the moment I observed them, and what I was doing in my life and career. I'm very fond of these things.

Volume 1 contained stories from 2002 to 2008. I wanted to start with some of my strongest work, but not too stylistically removed from my books. Volume 2 covers the last five years of The City. Then I'll work my backwards in subsequent volumes from 2002 to the strip's beginning in 1990. Yeah, yeah, it's all whacked up chronologically, but who cares?

Those next volumes will come out more rapidly. The year-long gap between Volumes 1 and 2 is due to the Fall release of Trashed. Couldn't have anything else on the shelves.

I'm planning a trip down to the Ohio State Cartoon Museum, where most of my City originals are housed, to scan all the early True Stories I don't have copies of.

When it's all over, we'll collect all the volumes in one big trade.

Posted by Derf Backderf at 9:57 PM