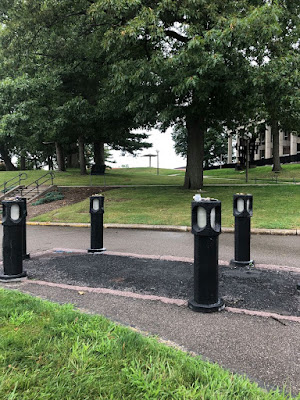 For the first time since my book was released, I paid a visit to Kent State.

Since it’s the break between Summer and Fall semesters, I had the campus completely to myself. I can count the people I encountered on just two hands, which would hardly be the case in another week when 25,000 students flood back onto campus.
Last time I was here was in February 2020. I had just returned from the Angoulême Comics Festival in France and a subsequent tour, and was gearing for to the looming release of the book, originally scheduled In April. I had an interview with the university’s NPR station, WKSU, to kick off the promotion blitz. The reporter and I walked around the campus and talked about the events of 1970.
Two weeks later the pandemic hit like a hurricane. The release of the book was pushed back to Fall 2020, my 6-month-long book tour went up in a puff of smoke, and the whole world went into lockdown.
Seems like a thousand years ago.
So I spent an hour or so wandering the site and reflecting. It’s a very moving experience to trace the footsteps of the people whose stories I recount. They felt very close by.
The pylons here mark the spot where Jeff Miller fell. At the top of the hill, way in the distance, is the Pagoda, where the Guardsmen wheeled and opened fire. The distance you see here completely erases the Guard's lie that they "feared for their lives." There was no one near them when they opened fire. Jeff was the closest of the four killed to the soldiers! 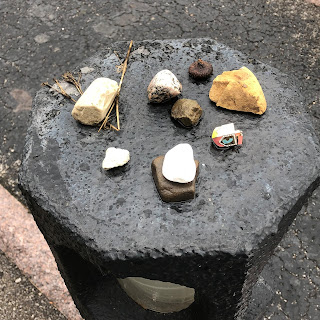 Just in front of Jeff's marker is that of Alan Canfora (below), shot and wounded in the arm. The tree here, which was obviously much smaller 51 years ago, likely saved his life. It took a couple slugs as Alan hid behind it.
Markers have been added to the site for all the nine wounded students.
Alan passed away last Fall. He was a force. The black flag here replicates the larger black flag he famously waved at Guardsmen on May 4, fashioned from some drapes in his student hovel, and was probably the reason he was targeted by the shooters. 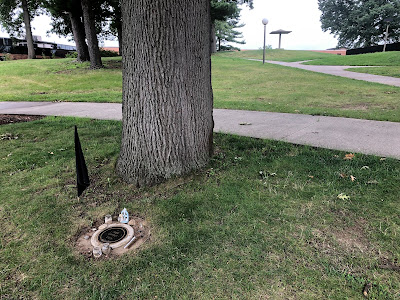 Atop Blanket Hill (below), looking down at the Victory Bell and the Commons.

Bill Schroeder stood here, watching the Guard move against 400 protestors chanting around the victory bell, and several thousands students up on the rim, most with books in their hands, as they paused to watch the unfolding drama between classes. The guard marched across the Commons from the buildings in the distance, then up the hill, bayonets drawn and indiscriminately fired tear gas at any and all students in their path. 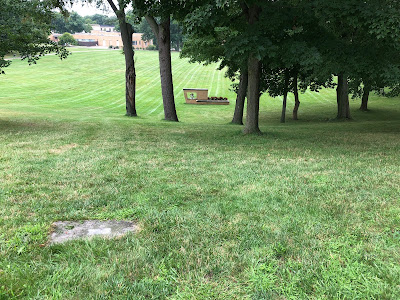