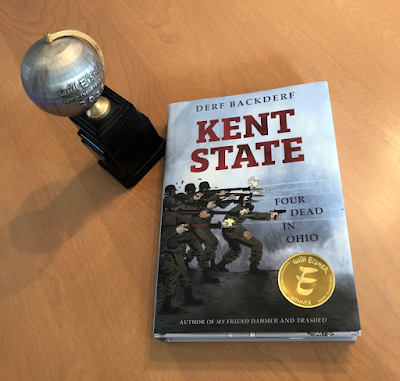 KENT STATE won an Eisner Award, for Best Reality-based Book. This is the big one, and I'm over the moon about it.
Disclosure: that's not the actual trophy. Haven't received it yet. I'm using an old Eisner here as a prop. Full disclosure: I fell asleep! It was a remote ceremony because of the plague, Pacific Time, and I dozed off and awoke with a start at 2 am. Only then did I see the first congratulatory texts. Classic. My big moment and zzzzzz.
Honestly, my first reaction was relief. I can’t make a better book than this one. It was a daunting challenge that took four hard years and left me completely spent. I wanted this win bad, I freely admit.
This Eisner, yeah, this one is special. As fond as I am of my TRASHED Eisner, for Best Lettering— In fact, I’m using that Eisner as a prop, since obviously, I won’t get the 2021 trophy for a bit— THIS Eisner is in one of the major categories, one of the big boys, the award FUN HOME and MARCH won, and it was a KILLER list of nominees. Absolutely brutal. Stone-cold classics all:
Big Black: Stand at Attica
by Frank "Big Black" Smith, Jared Reinmuth, and Améziane (Archaia/BOOM!)
Dragon Hoops
by Gene Luen Yang
(First Second/Macmillan)
Invisible Differences: A Story of Asperger's, Adulting, and Living a Life in Full Color
by Mme Caroline and Julie Dachez, translation by Edward Gauvin
(Oni Press)
Paying the Land
by Joe Sacco
(Metropolitan/Henry Holt)
Year of the Rabbit
by Tian Veasna, translation by Helge Dascher
(Drawn & Quarterly)
To win against such formidable competition, with a book that has been an obsession and a labor of love for a long time, is beyond gratifying.
It’s a bit anticlimactic, too. I’m typing this on my couch, instead of whooping it up at Comicon. You only get so many of these moments in life, and this cursed plague has snatched this one away, as it has stolen so much else. It is what it is. My first Eisner Award win was such an amazing experience. I just basked in it. I’m thankful I had that experience, because I’m thinking of it now. 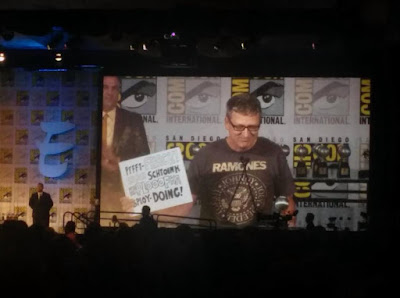 Above: giving my acceptance speech at the 2016 Eisner Awards ceremony.
I’d like to thank my beloved editor Charlie Kochman, who enthusiastically jumped on this project the moment I pitched it. Pam Notarantonio provided beautiful art direction. Chad Beckerman did the color on the cover, which I love. Maya Bradford, my publicist, faced daunting challenges in the weirdest year of book promotion ever. And all my colleagues at Abrams who made this book better, through wave after wave of copyediting and fact checking, to last minute tinkers and tweaks. I am SO grateful to you all.
My lovely wife Sheryl played a crucial role, first as a “comics widow” who gamely held the house together during that final year of me locked in my studio for long hours. She also whipped the footnotes into shape. How many comics authors can boast of a Pulitzer winner serving as a personal copy editor? Sheryl cried when she read the first draft. I knew I was onto something at that moment.
I’d like to especially thank the Students of 1970. Thank you for sharing your stories with such honesty. Thank you for so enthusiastically embracing this project. You are an inspiration. You were in 1970, for courageously standing up to forces of the state, and paying a bitter price for doing so. You’re still an inspiration, looking back on decades of activism and productive lives well lived. 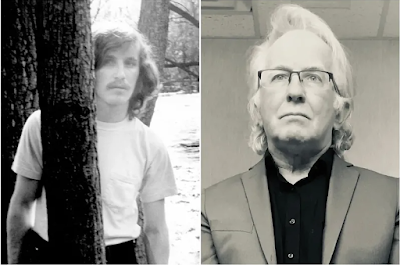 Above: Canfora (L) in 1970, behind the tree that took the bullet meant for him,
and the Alan I knew (R).
Last Fall, we lost longtime activist Alan Canfora, one of the nine students who were shot and wounded on that fateful day. Alan could be a tough customer, and did not suffer fools. He was an invaluable resource and I’m deeply in his debt. Honestly, I have no idea what he thought of the book! I sent him a copy, but his health was failing and I never heard back. What an indomitable force he was, and we are lesser for his passing.
Most of all, I’d like to thank Bill, Sandy, Allison and Jeff, murdered on May 4, 1970. This is their story, and I felt them nearby throughout the four years it took to make this book. Getting to “know” them, through their friends and classmates, was a joy and an honor. Jeff, in particular, was always at my elbow. He was a young guy looking for his path in life and having a great time while doing so, much as I was at that age. I feel him now, as I write this. 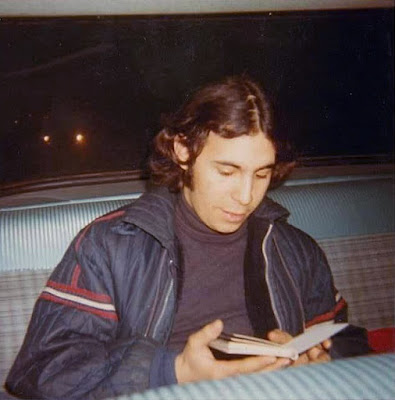 Above: a newly-surfaced photo of Jeff, a week before he was murdered on May 4.
And finally, this one is for you, Mom. As many of you know, I lost her last Fall to Covid. One of my favorite memories of her was when my 4th grade teacher was fed up with me drawing in class during her lessons. She’d take away my notebook. I’d draw on my desk. She’d scold me for drawing on my desk. I’d draw on my pants! Finally, she summoned my mother to discuss this problem. After a long monologue detailing my crimes, with me slumped glumly in a chair, my mother shrugged. “So? Let him draw. He’s still listening.” My teacher could only stammer in disbelief. My mother would have none of it. She knew that drawing comics was like breathing or eating to me.
“Just let him draw.”
Thanks for always letting me draw, Ma. I miss you.

Posted by Derf Backderf at 1:16 PM