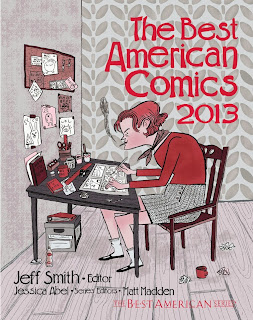 Speaking of my time at Ohio State (and bear with me here), the latest edition of Best American Comics is out, and an excerpt from My Friend Dahmer was selected by guest editor Jeff Smith, of Bone fame. This marks the third time in the past five years I've been selected for BAC. Lynda Barry picked a selection of The City in 2008 and Neil Gaiman tabbed Punk Rock & Trailer Parks in 2010. It's always an honor, even if its impact on my career is probably negligible.

If you're a fan of MFD, you'll find nothing new here. The excerpt is straight out of the book. But you'll find some other marvelous work that may not be on your radar yet. It's well worth checking out.

The Ohio State connection? Jeff Smith was also a cartoonist for the school paper, The Lantern. In fact, our work appeared in those pages together! His first year in the paper was my last year. I was doing (bad) political cartoons and Smith started his Bone franchise in comic strip form, in a daily feature named Thorn. This is the first one (I think):

I wasn't a prodigy, as I mentioned in my last post, but Smith sure was. Right from the beginning, his stuff was beautifully drawn. He had all the characters that would eventually form the Bone tale, but the writing was, as I recall, pretty spotty. It started out as a narrative, then he tried to delve into political satire, ala Pogo or Bloom County. That blew up on him when a storyline about racism was misinterpreted by a firebrand African Studies prof, who stormed the Lantern newsroom with a dozen or so students he had whipped into a frenzy and, of course, with a local tv news crew in their wake. I was in the newsroom during this incident. It was a Friday afternoon and since we only published Monday through Friday, there were only dozen or so staffers hanging about since the Friday paper was already out and the Monday deadlines were a couple days away. I pretty much lived in the newsroom, since in addition to being a cartoonist, I also served as a reporter and photog. Smith, who wasn't a journalism student, very seldom visited the newsroom. In fact, I only met him a couple times that entire year. I think he was a pretty shy guy back then.

But back to the scuffle. I remember when the protestors burst in I was on the other side of the large office, back near the darkroom, looking over some negatives. I heard the commotion, lots of yelling. One of the more clueless editors then pointed to me. "Jeff Smith isn't here, but Derf is a cartoonist!" she said. "Why don't you talk to HIM?" The next thing I knew, three enraged students were charging toward me, practically climbing over desks!! I did some fast talking and explained I had nothing to do with any of this, and they eventually stomped off to yell at the editor in chief. I drilled that idiot editor a new asshole later. To his credit Smith rushed to the newsroom and met with the protestors, who eventually said their piece and left. I believe Smith apologized in print and dropped the storyline mid-stream. It was all bullshit, of course. Smith's intentions were clear with those strips, but this particular prof had a burr up his saddle about how The Lantern covered minorities on campus, particularly black issues. Those were valid criticisms, but this guy was a major douchebag, and why he decided to zero in on a comic strip is anyone's guess. One of his demands was that all cartoons be run by him and a minority review committee before publication. Surprisingly, something very simlar to that eventually occurred! But I'll get to that later.

That was the big controversy that year, until I dropped the nuclear bomb later that Spring with the Schlichter cartoon below. Then everyone on campus forgot about the Thorn controversy right quick!

Smith stuck at The Lantern for another year after I graduated and then wandered off. I was down in South Florida by that time, drawing yet more bad political cartoons, and before the internet it was damn near impossible to follow things at my alma mater from afar. I lost track of him until I saw a copy of Bone in a comics shop in the early Nineties. We haven't stayed in touch. As I wrote, I barely knew the guy, although I couldn't have been more pleased at his success. We talked a little bit at a Columbus comix fest earlier this year.

This year was the pinnacle of The Lantern's amazing comix run. It started with political cartoonist Brian Bassett in the mid-Seventies, who was followed by Scott Willis, who was a pro political cartoonist for many years until moving into animation, then me. After my tenure came Smith, Jim Kammerud, another successful animator, and Steve Spencer, a longtime staff cartoonist at the Columbus Dispatch. Those three did various cartoons during my last year. How's that for a talent pool? And, finally, came Nick Anderson, a Pultizer-winning political cartoonist for the Houston Chronicle. There were a couple other cartoonists in that 15-year period who could have been pros, but gave it up or never tried or whatever. When Anderson left in the late Eighties, that was it for both the School of Journalism, which the university unforgivably dismantled, and the run of cartoonists. The university did nothing to encourage or support student cartoonists btw, outside of the mentorship of Lucy Caswell, head curator of the Billy Ireland Cartoon Museum. It all happened purely by chance. Indeed, the administration of both the university and the School of Journalism viewed us as more a pain in the ass than a benefit. At one point, just after I graduated, and as a direct response to my cartoons, there was a move by the J-school faculty, under pressure from above I've no doubt, to heavily censor the comix. A review policy was put in place, very similar to what the African Studies prof demanded. All cartoons were reviewed before being accepted for publication. If any staffer objected to anything in said cartoon, it was rejected. Cartoons were the only content in the paper subjected to this. Kammerud, to his credit, quit the paper rather than operate under those conditions. As would have I.

OSU also produced other comix notables, even if they didn't draw for The Lantern. Paul Pope is an A-list comix creator. he graduated in the early Nineties. Dan Collins was a hilariously tasteless cartoonist for Hustler. He preceded me by a couple years.

Now, of course, as the Cartoon Museum has grown to the world's largest, Ohio State is falling all over itself to embrace it's long-gone pedigree, as it should. Re-writing history? Maybe. I have nothing but fond memories of that period in my life and career. Indeed, I may not have had a career at all if not for The Lantern. What the paper offered was an opportunity, a chance to be published, a foot in the door. To see my stuff in print, to have people read it and respond, whether good or bad, it was such a rush. I'd re-live it again in a heartbeat. But only if I took my present abilities back in  time with me. Hoohah, I'd blow the fuckers away! And everybody read The Lantern. The circulation of the paper was 35,000! It was free, and there were piles of every edition all over campus. You'd walk into the cafeteria in the morning and every kid was reading it while downing the breakfast gruel. There was no internet, remember. The Lantern was the internet, at least content wise. I still own a complete set from my three years there. I'll never part with them. And for someone like me, who wasn't that good in the beginning, it was a launching pad. I'm sure Smith would agree. 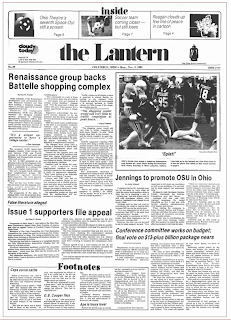 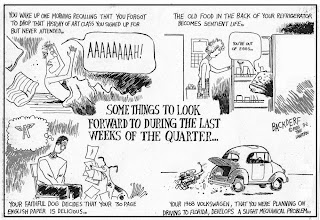 If you'd like to take a look, the entire Lantern archive is available fro online viewing HERE. Just type in the year and you can browse day by day. My cartoons ran from Spring 1980 to the end of 1983. Smith's ran from Fall 1982 to Spring 1984 at least. Not sure of the exact end dates.

But I digress. This is also apparently the last year Best American Comics will be overseen by the husband-wife team of Jessica Abel and Matt Madden. It's been a stellar annual, under their stewardship.
Posted by Derf Backderf at 12:48 PM