Lou Reed: The King of the Slag Heap.

It was (who else?) Lester Bangs who turned me on to Lou. As a teenage fanboy who didn't come to great music naturally like the hipper kids did, Bangs was my musical mentor. If you've read Punk Rock & Trailer Parks (and if you haven't, what the fuck?) you know that. Living in my small Ohio hometown,long before the internet, there were very few glimpses of the world outside my sleepy hamlet. One of those windows was Creem magazine and the writings of the great Bangs. And no one was a greater fan of Reed's music than Lester. 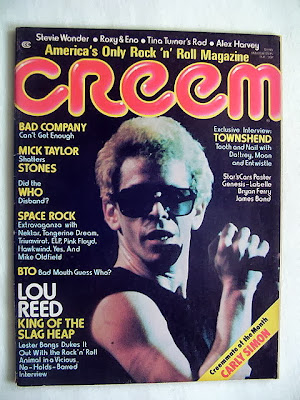 I was intrigued. It was the mid-Seventies and the music pouring from the radio was either disco or stoner rock. At 15, I was just emerging from, like all 15-year-old boys of that era, a shameful prog rock period that still makes me cringe in embarrasment. I had finally tired of 20-minute-long Emerson Lake & Palmer instrumental tracks and was looking around for music, something fresh, something that fit my nascent hipster persona, or at least that's what I fancied myself, alone in my room, something that spoke to me. I had no idea where to start. Punk was still years away. I loathed disco, and wasn't much more fond of stoner rock. Screw Aerosmith. Heart was a yawn. And the Dude was right about the fucking Eagles, man. I liked glam, even though I wasn't entirely sure what it was. Bowie, T Rex.and Mott the Hoople were all on my radar. But the whole bisexual thing gave this Midwestern kid the willies. Besides, rock gods were just so high above us all. I couldn't relate to guys that had groupies draped all over them and were living in fucking castles. So I turned to Lester for guidance.  And found Lou. "King of the slag heap," he called Reed. Now that sounded interesting!

When asked, the clerk at Disc Records in the mall handed me Rock 'n' Roll Animal and I forked over $6, scraped together from my paltry allowance and secret raids on my mother's laundry change jar. I was lucky he wasn't a prick and handed me the newly released fuck-you-all follow-up, Metal Machine Music! You never knew about record store clerks then. Many delighted in pawning off impenetrable albums on unsuspecting pimply kids. I guess tricking an 8th grader into wasting his lawn-mowing money gave them a rush, a few seconds of power to help them forget they were working in a goddam mall and wearing a clip-on tie.

Rock 'n' Roll Animal is an album like no other. Most of it is re-interpreted Velvet Underground standards, recorded live. And it became a monster hit LP, outselling any Velvets album by a couple million. How did that happen? Now, the Velvets weren't really known then, except to the hippest of the hip. They weren't on FM playlists, that's for sure, with the constant rotation of Zeppelin, Heart, Steve Miller and Bad Company. I'm certain I had never heard them at that point. So for most listeners, it was the first time they heard Sweet Jane. What did this song mean? I wasn't sure. Cross-dressing? Drugs? Fucking? All three? Something else entirely? Didn't really matter. I loved the way those lyrics unfolded. And, man, that guitar riff! It's one of those songs you want to be 10 minutes longer! I moved the needle back to the beginning of the track over and over.

Rock 'n' Roll Animal blew me away. I played it constantly. Who was this glam badass? Lester made him sound like the biggest dick in the world. From there, I worked backwards to Transformer and the dark, disturbing Berlin and finally to the Velvets' Loaded. When I heard their rendition of Sweet Jane, I began to understand. 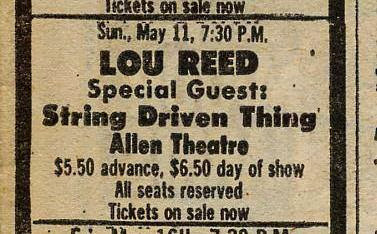 I first saw Lou live in 1975, at the crumbling Allen Theater in downtown Cleveland. A fittingly skanky venue for the King of the Slag Heap. A friend's cool older sister (a giant lesbian jock) drove us. Packed house, thick cloud of pot smoke, cool cats galore. Lou stalked onstage and looked like he detested us all. The crowd returned the love. During White Light, White Heat spotlights behind him blazed out into the crowd, unrelenting through the whole song, searing eyeballs.

FM radio was our soundtrack in the Seventies. It was everywhere, wafting out of every car, playing at every party. You listened to it as you drove aimlessly over country roads, or in your bedroom as you drifted off to sleep. It played constantly in the high school art room where I toiled away the day. The big FM station in Cleveland was WMMS. It was mostly crap, of course. Lots of Aerosmith and Bad Company, Steve Miller and Fleetwood Mac. Especially during the afternoon slots. Stairway to Heaven again? And, oh great, followed by Magic Man. But they always played Lou. Every day. Usually Sweet Jane, occasionally Walk On the Wild Side. That's as deep as the playlist went. I never tired of them.


Above: the full CoffeeBreak Concert, sponsored by WMMS. A mid-afternoons set, broadcast live, back when FM radio did such things;

The godfather of punk they called him, because rock aficionados have to categorize and file every artist. But the unbroken thread from Lou Reed to Richard Hell is certainly there. Even after punk took hold on me, it was ok to hang onto Lou. I even eventually bought a copy of Metal Machine Music! On 8-track tape! Still have it. The greatest "the party is over it's time for everyone to clear out" album ever made. Bowie sold out his thin white duke ass, but Lou remained Lou, whoever that was. No one could figure him out. Not even Lester.

He made a few great albums after Rock 'n' Roll Animal– The Blue Mask and New York– but that was definitely his peak. A spent force? Maybe. But for ten years there, from the Velvets to Animal, he was a force, maybe the creative force in rock. He changed popular music. He changed lives. So he made lots of crappy albums since. So he was an unrepentant prick. Who cares?

Here's part of Bang's interview with Reed from 1973:

Everything is jokes to this bibulous bozo; he really makes a point of havin' some fun! Although it does disturb his friends and fans to see him in such failing health. But he can find a joke even there. At one point I asked him when he intended to die.
"I would like to live to a ripe old age and raise watermelons in Wyoming." Then he takes another glug and machos: "I'm outdrinking you two to one, you know."
"Are you proud of yourself?"
"Yeah. No, not actually; it's just that a single shot of Scotch is so small that you've gotta nurse it like it's a child or something. I drink constantly."
"How does it treat your nervous system?" I probed.
"It destroys it," he beamed.
"Then how do you intend to raise your watermelons?"
I suppose it's no surprise that Lou died of liver disease. But he out-lived Lester by 30 years! Lester would have laughed his ass off over that.