When They Were Buckeyes: Derf 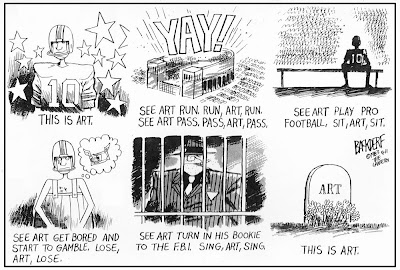 My alma mater, Ohio State, just posted a sampling of the political cartoons I drew for the student newspaper, The Lantern. I gave all those things to the Ohio State Cartoon Museum mainly so I'd never be tempted to look at them again. Guess I should have thought that through. Who knew Ohio State would one day be proud of me!

Cracks me up that the page leads off with a cartoon that nearly got me thrown off the paper.... and tar and feathered, for that matter.

Art Schlichter was a football god at Ohio State in the early Eighties, the team's most accomplished quarterback ever. He was a freshman when Woody Hayes punched an opposing player in the Gator Bowl (in fact, Schlichter threw the interception that caused Woody to finally lose his sanity).

He was the archetype pampered football star. A booster set him up with a nice off-campus apartment. He tooled around in a new sports car, provided by an unknown benefactor. He never attended class, but somehow magically kept academically eligible. We were in a math class together. He never showed up. Not once. When I inquired about this, the graduate assistant told me wearily "Mr. Schlichter will be getting a B in this class." It was the last era when football schools could so blatantly flaunt the rules, and Schlichter reveled in it.

He finished up at OSU in 1982 and headed off to the NFL. The Baltimore Colts made him the third pick in the draft. And then his life fell apart. He had a big time gambling addiction. It started with betting the horses, on trips to the track with Ohio State boosters and head coach Earle Bruce! By 1982, he was betting on NFL games, including games in which he played. When this was discovered, he was banished from the NFL for life. He escaped felony charges by ratting out his bookies.

So I drew the above cartoon. Pretty nasty, to be sure, but I'd had it at that point with the whole  college athletics thing. At The Lantern, we were privy to all the athletic scandals that the university successfully covered up. Ohio State, you see, is in Columbus, but it is its own municipality, with its own police force. Columbus cops have no jurisdiction on campus. And the university used the shield of "student privacy" to cover up everything and seal all arrest records and criminal complaints. If I student was involved in any way, the records were sealed. Without documentation, the paper couldn't write stories. But we knew of the scandals, and after four years I was revolted with the whole culture. There was a gang rape the previous year, involving several football players and a basketball star. It started as a drunken orgy, but then the girl wanted to stop but there was a line out the door of the dorm room at that point, and the boys didn't stop. Sleazy incident all around. The victim was paid off and set up at another school. Top football stars all had new sports cars, courtesy of a big local car dealer. There was even a sex scandal involving the band! Freshman were forced to fellate a giant rubber dick on the band bus. One girl balked, then complained, and was then hounded and threatened.

In truth, when I turned that cartoon in, I didn't think it would be controversial! Ah, the innocence of youth. I woke up the next morning and went to class. I noticed some people were glaring at me, and thought it strange, but didn't make the connection. When I wandered into The Lantern newsroom around lunchtime, I was greeted with a loud chorus of boos and pelted with wads of paper! The phones had been ringing off the hook. Hundreds of angry calls. The J-school president was under fire, too. University bigshots were demanding my head. The athletic director wanted me thrown out of school! The J-prez wasn't my favorite guy, but to his credit, he stood firm. Press freedom was the issue, and it was sacred to him, as it should have been. Other J-school faculty were, sadly, not as supportive. Some were, but others called me an embarrassment and thought I should be censored. It was a sorry example for us students, even if it was an accurate glimpse of what awaited us in the weak-kneed corporate newspaper world.

It got worse as the day wore on. In afternoon classes, fellow students chewed me out. As I skulked back to my apartment, people yelled at me on the Oval (still don't know how they knew who I was!). My phone number was in the student directory, so I finally just had to unplug the phone for a couple days. Local sportscasters, Buckeye sychophants all, led with the story that evening. Sportsradio yakkers went bonkers on me. After a few days of this, I split town until tempers cooled. I hid out at my girlfriend's house in (fittingly) Michigan.

The J-school held fast, though. They weren't happy with me, but I was attending on a journalism scholarship and had already won a collegiate award for my cartoons, so they couldn't very well banish me, even if their commitment to free expression hadn't been as strong as it was. But when I graduated at the end of that year, the Journalism faculty instituted draconian rules on cartoons so, as one of my prof critics put it, "We'll never have another goddam Backderf." One of my successors quit in protest over this. It was unprecedented. for one staffer to cause such a philosophical change. If I'd been a writer, of course, not a cartoonist, this never would have happened. Another lesson to what awaited in the corporate media world. Generate too much controversy, stomp on the wrong toes, cause an executive to spend time on the phone, and you'll pay the price. In fact, in the real world, there would be no hesitation on bringing the ax down. And down it came.

As for Schlichter, he has spent much of his adult life in prison. His addiction took him over completely. He stole and he swindled. He hocked his wife's wedding ring. He became a coke head. His despondent Dad killed himself. Schlichter is currently serving an 11-year sentence for swindling fans out of millions. He's a pathetic parasite, paunchy and bald, his on-field glories long forgotten, completely disowned by his alma mater and anyone who knew him. He could have made a comfortable living just being Art Schlichter, even if an NFL career had never panned out. But he was consumed by his own demons. In 1983, I thought him the prime example of the jock aristocracy, an arrogant, coddled creep. Now I pity him. His life is shit.

And here, 30 years later, Ohio State publishes that cartoon again! Never thought that would happen! Most, if not all, of the bigshots who wanted my skin are long dead, of course. Hell, the J-school is gone, dismantled by the curriculum star chamber who decides such things. You can't even major in Journalism at Ohio State anymore, not that anyone would want to given the sorry state of that industry. The Lantern still exists, but it's a thin ghost of what it once was...  and it doesn't have student cartoons anymore, at least not the amazing back-to-back number of future pros that it once boasted..

I can't look at these cartoons without cringing. Man, they're horrible. I wasn't a prodigy, I was a slow learner and I started from scratch, learning completely on my own every step of the way. And it would be another five years after I left Ohio State before I found myself stylistically. But, man, I had fun making these. For three full years I drew political cartoons for The Lantern, the longest tenure of any of the school's storied cartooning alum. Why political cartoons instead of a comic strip like The City?  To be perfectly honest, it was because the political cartoons were run much bigger than the comic strips! I wasn't even that politically committed, and certainly not very astute. I wish the cartoons were better, but, even wincing as I do, I have nothing but fondness for them.
Posted by Derf Backderf at 11:55 AM