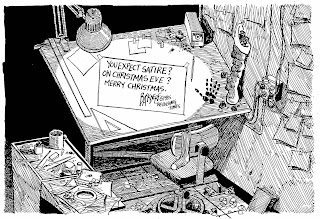 A couple things about this piece. 1. what a rotten cartoon! 2. This is a drawing of my "office" which was in the basement of the newspaper building where I was employed at the time, in an unused corner near a giant, antique stat camera that hadn't been used in 20 years.

Since I was the first (and only) cartoonist The Evening Times in West Palm Beach, FL, ever had, no one had a place for me to work when I was hired. So I got an empty desk in the art dept, which serviced both the morning and afternoon papers, both owned by the same conglomerate. The artists drew mostly the morning paper, since The Evening Times was dying, like all p.m. dailies.

All the artists at that time were bible-clutchers. Real lobotomized-by-Jesus types. One in particular insisted on playing Christian talk radio all… fucking… day... long. Jim and Tammy Fay Bakker, Pat Robertson, some low-end ranters who were even worse! One day, two of them got in a heated argument about some issue, and began yelling scripture to each other. It went on all day! Young and stupid as I was, and never having encountered anything like this before, it never dawned on me to complain to HR. My pleas to turn to a music station, even elevator muzak, were rebuffed. The fucker refused to listen with headphones. ALL had to hear the word! Finally I could stand no more and one evening after everyone left, I dragged my board down to the bowels of the building into what would charitably be described as a "storage area." A better description would be "a giant pile of discarded shit." Rolls of newsprint, drums of unknown chemicals, bundles of 5-year-old papers.... and me. I shoved away some debris to make room near the one electrical outlet (pictured here).

It was peaceful down there. Just me and the Palmetto bugs, giant brown cockroaches who outnumber human Floridians about 10,000 to 1, who would ocassionally sprint across my drawing table. I'd stab them with my exacto knife. Some critter, presumably a rat, ate my lunch one day when I was at a meeting.

Eventually, turnover being what it was at the low-paying paper, most of the artists moved on, save the most lobotomized one. The new hires were as horrified at the aural assault as I was, and they too fled down into my sanctuary. We all drew while listening to punk rock and jazz and reveled in our hedonistic ways. Soon only the bible-clutcher was left in the actual art department. One board and an empty room! Then some manager finally figured out what was going on, probably yelling "Where the fuck all are the artists?", ordered the radio turned off and everyone back to their department. But I got to stay in the basement.

Devout artist quit shortly after. He stopped speaking to me after I moved out! Guess he was hoping to convert me.
Posted by Derf Backderf at 7:04 PM