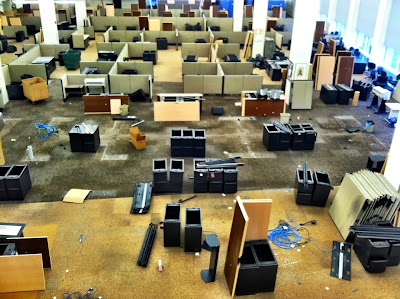 This is the newsroom of the Cleveland Plain Dealer, being dismantled last week. The remaining staff, which was reduced by 30 percent when corporate HQ changed the paper to a 3-days-a-week publication, is moving to smaller digs in a rented space elsewhere. You can read all about this HERE if you care to. Most of the Plain Dealer Building is to be rented out to other businesses. The newsroom here will be the home of a digital-first media company that Corporate HQ is counting on to be the future of journalism. Here's one of their stories; help a staffer name her cat.

I worked at the Plain Dealer at one time, as an art director and back-up political cartoonist. It wasn't in the building above. That's only about 15 years old, built at great expense! It was in the old building, where several thousand people worked. The place teemed with life. Pressman covered in ink were in the basement. Teamsters massed outside in the loading dock. The newsroom had probably 400 people working there.

I really try not to blog about the sad state of newspapers often, because it's so incredibly depressing to me, and newspaper bankruptcies, fire sales and closings are coming so fast these days that it would soon become monotonous. Besides, I know none of you care that much. You're reading a blog, after all, not a newspaper.

But I've been a newspaperman most of my life. Reading the paper was a big part of my daily routine. It's where I first discovered comix. It was the old cliche scenario: the young twerp spread out on the living room floor with the Sunday Comics section before him, reading every one. Even Dondi. I formed my own neighborhood newspaper. Wrote every article (top story: Backderf kid has street's largest Hot Wheels collection) and filled it, of course, with comix.  I worked on the school paper in high school. Then for The Lantern at Ohio State, where I attended on a journalism scholarship, and launched my career. By that time, I read five or six papers a day.

I'm not a newspaperman any more. Papers have no use for me or what I do. That's ok. Given their sorry state, to be blunt, I've outgrown them.  But I still lament their passing. We're losing something important here. In a few years, when you get all your news from Nancy Grace rants and Buzzfeed slideshows, you'll understand what.

I was looking over my newspaper resume the other day. Here it is, from beginning to end, in the space of 30 years. These are just my base papers. The total number of newspapers my work has run in tops 200 easy. Most of them aren't in any better shape than the ones below.

The Evening Times– merged with the morning Palm Beach Post and was closed.

The Palm Beach Post– corporate owners laid off or bought out half the staff, sold the press and rents out half the building.

Akron Beacon Journal– staff has been cut by 3/4s, press is being sold and is looking to rent the building.

Cleveland Free Times– merged with a competing weekly and was closed.

That list pretty much sums up what's become of the industry, no? Glad I'm no longer a newspaperman, that's for damn sure. But it makes me very, very sad nonetheless.