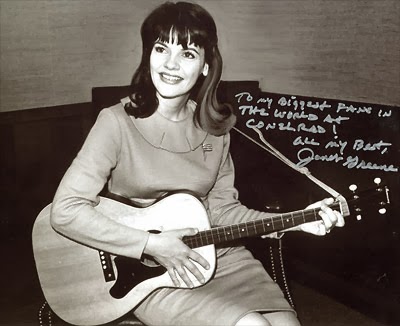 Thanks to pal Ralph Carney for reminding me about Janet Greene, the rightwing folk singer dubbed the "anti-Baez" back in the Sixties.

She bubbled up out of the conservative ooze of our own Cincinnati, known here in Ohio as  "Where Nazi Germany meets the Old South", and crooned hilariously irrational ballads like Commie Lies, Comrade's Lament and Poor Left Winger.

She started on The Uncle Al Lewis Show in Cincy, a local kiddie program. When the station manager hit on her, she caused such a scene she was hauled away by the cops. She was acquitted in the subsequent trial, which made headlines in Cincy. She then became a ardent follower of the infamous Fred Schwarz, Red Baiter Supreme and head of the Christian Anti-Communism Crusade. Soon she was crooning at his rallies and was touted as a counter to the evil threat of Bob Dylan and the rest of the folk singing East Village Jews. After Goldwater's thumping by LBJ, her career rapidly fizzled.

In the late Sixties Greene moved to California and became a lounge singer. She's in her 70s and retired now, but still out there somewhere. Hard to believe she hasn't re-surfaced to play at a birthday party for one of Sarah Palin's kids, or at a Tea Party rally in rural Indiana.

Posted by Derf Backderf at 8:15 PM