PR&TP Item of the Month: The Dead Boys at The Bank!

These recently unearthed photos come from Rubber City punk archivist Jimi Imij, who supplied tons of reference material that enabled me to lovingly recreate The Bank and the Akron punk scene.  The general consensus of veteran Akron punksters is that it took place in 1978. The gig is not listed on the Dead Boys fan site, but that's unimportant, since that isn't a complete list. Hammer Damage, a popular Akron punk band, one of the many groups that failed to make it nationally like their predecessors, opened.

The Boys were house regulars at CBGBs by this point. They formed in late 1975, out of the ashes of the sonic monster that was Rocket From the Tombs, the greatest punk you've never heard of. They played around Cleveland and Akron at the few venues that booked punk bands: The Crypt, the Viking Saloon and the Pirate's Cove. Then they split for New York and made their name. They returned to the Rubber City as heroes.

They were touring in support of their first album, Young, Loud and Snotty, one of the classic punk LPs. Half the band was from Cleveland, half from Akron, and when they returned to the area they usually played in Cleveland venues, like the Agora, and made in-store appearances in Cleveland's far-superior record stores. In fact, their appearance at Drome Records in Cleveland Hts. resulted in the store losing its lease, after the Boys pulled down their pants, posed in the large front window and flashed horrified afternoon commuters. So visits to the Rubber City, despite the vibrant scene and the hometown lure, were rare.


Here are the Dead Boys at their peak, performing Ain't It Fun. 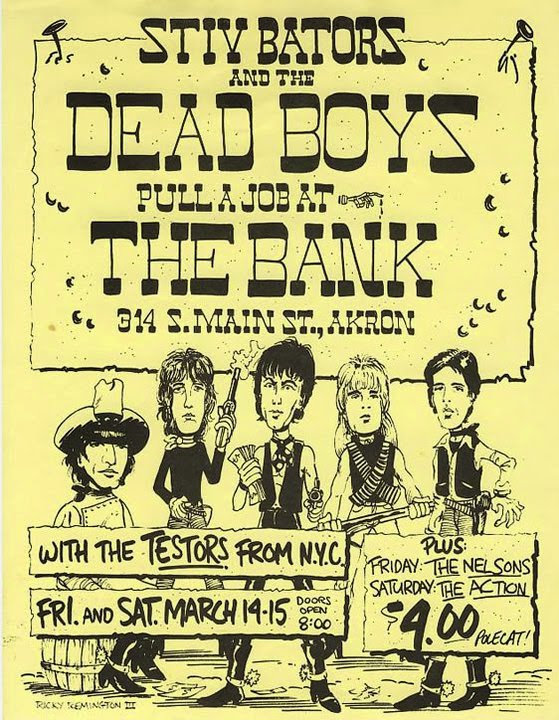 Flyer for the Dead Boys back-to-back, sold out shows at The Bank the following year, in March 1980. By mid-summer of that year, they were done. After four years of relentless touring and gigs, and a contentious recording session that resulted in their disappointing second album, We Have Come For Your Children, the band broke up. Their last gig was in Santa Monica.