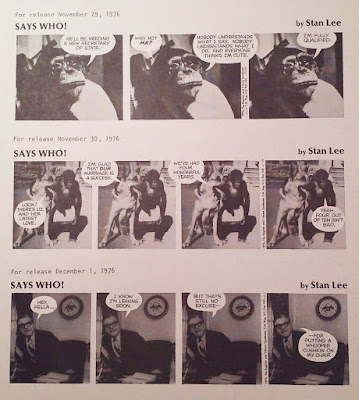 Here's an interesting artifact I just stumbled across. This is a failed 1976 comic strip by none other than Marvel's Stan Lee, titled Says Who! It's a tepid ripoff of National Lampoon's popular Foto Funnies and (before that) the photo comics in Harvey Kurtzman's Help.

Lee was technically the president of Marvel in 1976, but he had ceded the day-to-day operations to others and was really little more than a well-paid figurehead and company spokesman. His main job was pitching Marvel to Hollywood, resulting in a string of cheesy tv series, Saturday morning cartoons and godawful tv movies that were a far, far cry from the blockbuster films of today. Here's the worst one, a Capt. America tv movie from 1979. He also wrote the text in the bestselling Origins of Marvel Comics series (with the shameless credit hogging that got him in so much trouble later) and made a tidy living appearing before adoring fans at colleges and comicons.

Say What! was distributed by the Register & Tribune Syndicate of Des Moines, Iowa, owned by a local press baron. Founded in 1922, the Register & Tribune Syndicate was most famous, comics wise, for Family Circus and Eisner's The Spirit. I can't find any info on Say What! at all. Did Stan pitch it to the syndicate, or did the syndicate approach Lee? Did he actually write this thing, or just attach his name to it? Unknown. I can't imagine he was scrounging up stock photos on his own time, which was fairly time consuming before the internet. I think it more likely an art director at the syndicate picked random photos from the syndicate files and then Lee wrote a gag to fit.


The strip itself is classic Stan, trying to appear edgy and hip, without really saying anything at all. There's not a single giggle in the bunch here. It's just hokey patter, but minus all the familiar "face fronts!" and "excelsiors!" that we Marvel readers lapped up. Keep in mind 1976 was also the year Saturday Night Live debuted and became a pop-cultural phenomenon, so edgy political satire was hot, but not, of course, in the staid daily press. Doonesbury was also at it's peak, and papers were leery of adding more political strips, since Trudeau was causing them so much grief with their conservative, aging readers.

Say What! is lame, but no worse than 90% of the crap on the daily comics page in the Seventies, which was the first of many dreary decades for daily strips. I'm guessing it failed, not only because it's not very good, but because a photo strip would have been very tough to reproduce in most newspapers, which were all using antiquated presses and technology that hadn't changed much in 50 years, and, in fact, actually got a bit worse as papers cut costs with cheaper plastic printing plates, before it improved exponentially with the digital revolution of the Eighties. Say What!, I conjecture, just wasn't worth the extra production work, especially since, well, it stinks. I can't find any info on when the strip began or ended. These samples are from October to December 1976. 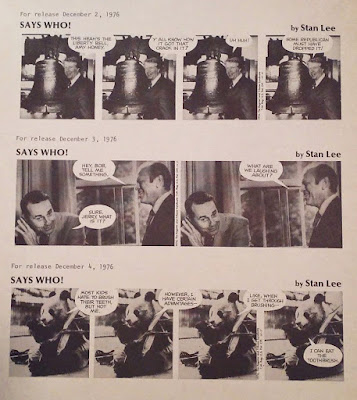 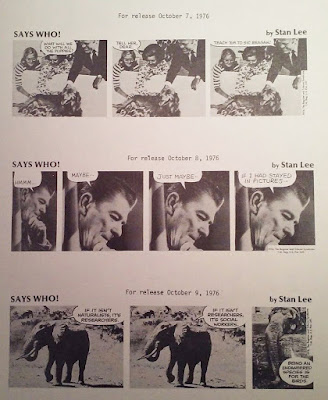 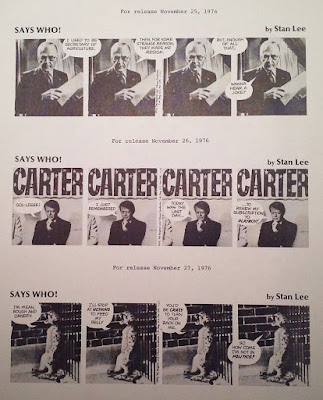 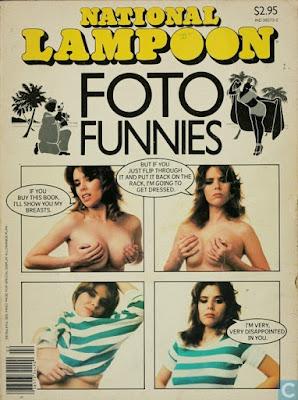 As was Help magazine's photo comics, a decade earlier. This is the most famous one, art directed by Terry Gilliam and starring a young John Cleese! 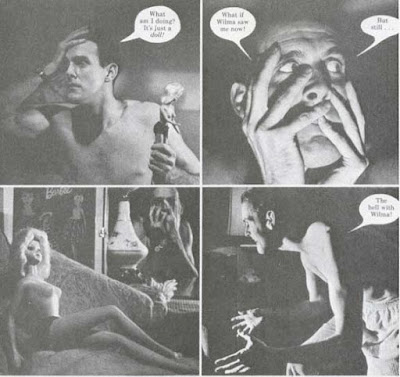 Lee himself had a history with photo funnies. Marvel published several monster mags in the early Seventies in this vein. None of them lasted more than an issue or two. This is the is last attempt (I think) from 1972. It was hardly original. The many monster mags of the Sixties frequently did photo funnies, too. 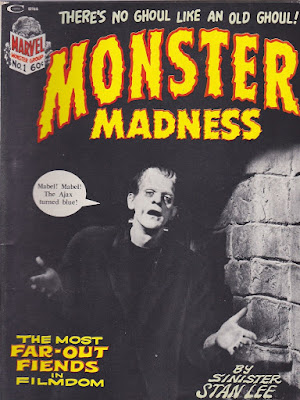 The other problem with doing a topical strip in 1976 was the six-week lead time daily strips had at the time. It wasn't like today, when you draw a strip and post it the next day, or immediately. So news could, and did, change. Stan obviously didn't anticipate the GOP National Convention, held in August 1976, where Ford beat down a challenge from Reagan. Stan (or more likely, an editor at the syndicate) had to change the punchline of the strip below and mail out a correction. 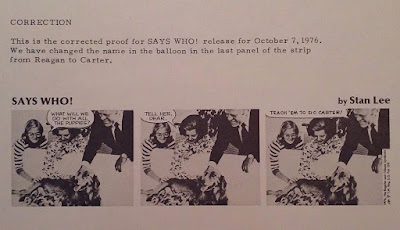 A few weeks after the last strip here, in January 1977, the Amazing Spider-man strip, which Stan wrote, was launched. It was also distributed by the Register & Tribune Syndicate and was an immediate hit. I'm guessing Says Who! was quietly retired at that point.