Trashed is out Tuesday!! 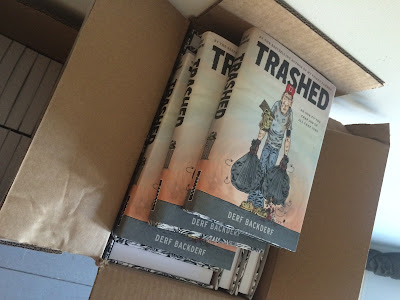 FINALLY! The official US release date of Trashed is tomorrow, Nov. 3. Copies will start flying out of the warehouse at the crack of dawn. (OK, maybe not, but I like to think they will).

It only seems like this book has been out for months. It was released in France in late September, and is already in its 2nd printing! French critics have showered it with acclaim and its gotten a surprising amount of coverage in the press. Surprising, because I wondered how French fans would take to this very American tale. My Friend Dahmer and Punk Rock & Trailer Parks are oh-so American, as well, but the former has the universal appeal of an iconic fiend and the latter of punk rock. Trashed doesn't, or so I thought, have that kind of universal appeal. Well, I'm happy to report I was wrong about that!

And now, at last, the US launch. I'd prefer you got your copy from your favorite local indy bookstore, but if that option is not available to you, here's the Amazon link.

Do a guy a solid and pre-order today. In the wacky world of book publishing, pre-orders count as Day 1 sales and are used to figure bestseller lists right out of the gate. That's why all those books are flaunted as bestsellers before they're even released. It's important, because that starts the ball rolling.
Posted by Derf Backderf at 12:33 PM