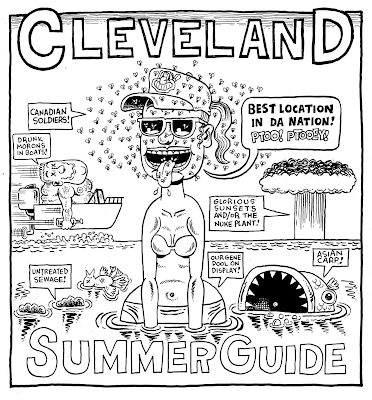 I just stumbled across this. This is the last cover I did for a Cleveland weekly paper, from 2010.
End of an era.
It’s not the cover that ran, because the management at the Cleveland rag at the time, Cleveland Scene,  rejected it. Too cranky, not positive enough. Obviously, I was NOT the man for THIS job.
15 years earlier, the editors would have LOVED this cover. I was at the Cleveland Free Times then and filled that paper with snarky cartoons. It was a lot of fun. I drew probably 50 covers in the Nineties for the Free Times, and for The Cleveland Edition before that. The business folks at those papers always told me that “Derf covers” had a higher pick-up rate. That’s because readers love comics! Something weekly papers had forgotten by 2010. And into the tar pit they sank.
Six months after this rejected cover, I had a messy break up with Scene and that was the end of my 20-year career in Cleveland weeklies. Happily, I got my book deal for MY FRIEND DAHMER at the same time and was on my way to much better things.
Y’know, looking back on it now, my demise in weekly papers is all a bit of a meh. It was horrible at the time, and I watched it all with despair. But now, in hindsight? Things change. Everything has its time. The savage snark of my newspaper strip was a Nineties thing. It fit beautifully with the era, and, not surprisingly, that’s when it was most successful, and the most gratifying to produce. In the 2000s, progressively less so. Humor changed. Maybe it was existential shock of 9/11… or the endless dreariness of the Dubya Years… or just the personality of that miserable decade. I didn’t see that clearly then. I do now. My biggest regret is not retiring the strip at the end of the Nineties and moving on full time to books. I did the strip WAY too long.
Still think this is a funny cover, though. Imagine it in color. The woman covered in cheesy tattoos, the Lake a nice algae green.
Posted by Derf Backderf at 11:50 AM