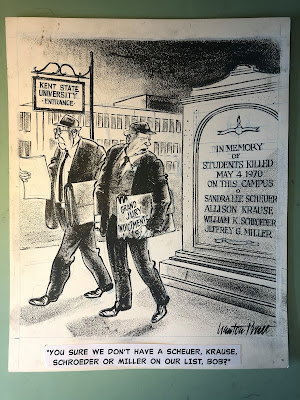 Here’s an original art score I just acquired.
This is a political cartoon about the Kent State Massacre, from 1970!
It’s by Newton Pratt, the longtime cartoonist for the Sacramento Bee. Pratt was 69 and just one year from retirement when he penned this one. Pratt was a well-regarded cartoonist of the Herblock School, as you can see. Vertical format, lots of crayon, lots of labels.
This cartoon is blasting the Ohio State Grand Jury verdict of October 16, 1970, just five months after the massacre. Gov. James Rhodes, the man most responsible for the tragic debacle, convened a kangaroo court to “investigate” the shootings, and bury it. Rhodes installed a staunch ally as judge, and allies as prosecutors. The grand jury was convened in the rural county where Kent State is located, thus ensuring a jury pool of conservative locals with strong animosity against students in general, and student protestors in particular. Attempts to move the jury to a neutral county were quashed. Rhodes’ judge and prosecutors also made sure that the governor was not brought to the stand.
After several months of secret testimony (all reportedly destroyed by order of the judge after the rulings) the grand jury exonerated all the Guard officers and the Guardsmen who shot at students. Instead, the jury indicted 25 protestors who were shot AT, including most of the wounded students! It was an utter travesty.
This was Rhodes rebuttal to the Scranton Report that was issued in September, which placed blame for the massacre squarely on Rhodes’ decisions and on Guard leadership. The Scranton Commission was convened by Nixon to investigate the campus unrest of Spring 1970, specifically the slaughter at Kent State and Jackson State. Rhodes was furious at this political betrayal by Nixon and the FBI. Rhodes had been one of Nixon’s earliest supporters, and was a big reason Tricky Dick won Ohio in the 1968 election. But Rhodes was to be term-limited out of power at the end of 1970, so he was of no further value to Nixon, and Tricky threw him under the bus to distract from his own machinations against the Antiwar Movement. Classic Nixon! Rhodes officially rejected the Scranton Report, and his Grand Jury provided him cover to slink out of office… and to be reelected four years later!
The Kent 25, as they became known, faced decades in prison on a plethora of state felonies. This scathing cartoon asks the question, why didn’t Ohio indict the murdered students, too?
By Fall 1971, the state’s cases fell apart. A couple students plea-bargained their felony charges down to simple misdemeanors, a small fine and no jail time. A student who took his case to trial was exonerated. At that point, prosecutors DROPPED all felony charges against the remaining protestors and abandoned the indictments! Clearly, they didn’t want witnesses called to testify under oath, especially Rhodes and Guard brass, because THIS testimony would be public record, not sealed and destroyed like the grand jury testimony. Rhodes was also out of power by Fall 1971, and his Democrat successor had no interest in Jimbo’s vendettas or ass-covering.
A lot of political cartoonists are lost to time, theirs being the comics genre with the shortest shelf life. Here’s the only bio info I could find on Pratt. He was a native of Sacramento, born to Irish immigrant parents. He dropped out of school at age 10 and began working, eventually becoming a draftsman for the state Division of Highways. At the Sacramento Bee, Pratt worked at a variety of jobs including messenger, office boy, and copy boy. Walter Jones, the head editor for the newspaper, eventually hired Pratt as the main editorial cartoonist in 1938. His work was reprinted by the New York Times and Washington Post, which brought Pratt national acclaim. In the 1950s, Pratt was one of the first editorial cartoonists to take on Senator Joe McCarthy’s anti-Communist hysteria. By the time Pratt retired in 1971, he had produced roughly 7500 cartoons. He was a 3-time Pulitzer finalist.
This cartoon was made with pen & ink and black crayon. It’s drawn on coquille board, aka stipple board. The paper has tiny bumps, so when you drag a crayon across it creates that dotted shading. The whole thing can then be sized and shot as straight line art, but it has the effect of a halftone, without losing the strong, deep blacks. It was perfect for the ghastly reproduction of newspapers in the 1930s and 1940s. A guy who mastered this stuff could work fast, another benefit. It was definitely a dated look by 1970. The new generation of political cartoonists embraced then-modern art techniques, especially Zipatone dot screens and Craftint paper. Old-timers like Pratt were called “grease pencillers,” because of the stipple board technique.
I tried it a couple times when I joined the Plain Dealer in 1986. That was such a retro paper, 25 years behind the technological curve, and the supply storeroom in the art dept. was packed with vintage art supplies. My attempts failed miserably! There was a definite learning curve, and it wasn’t worth the effort.
Craftint here in Cleveland, who specialized in cartoon and comics art supplies, manufactured this stuff until the 1970s, then sold it to another outfit who produced it as Duoshade paper. There’s no stamp on the back to indicate it's Craftint, unfortunately.
This was a real find, being the author of KENT STATE. Believe it or not, there were not a lot of political cartoons, that I could find, about the Kent State Massacre in 1970. It was just TOO hot a topic. Cartoonists shied away for it, or, more likely, were ordered by their editors to do so. I was thrilled to stumble across this original.
Posted by Derf Backderf at 12:02 PM