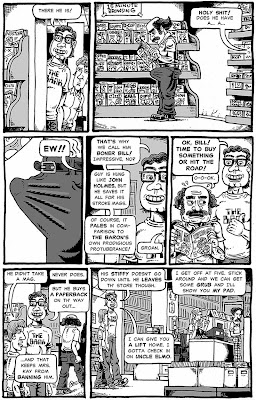 These back rooms were a common part of the urban landscape. They were everywhere. Commonly, they were behind swinging saloon doors, like I picture (above) in this scene from Punk Rock & Trailer Parks. All the newsstands and paperback stores that I shopped at when I was younger had back rooms. As I was browsing sci-fi paperbacks, I'd watch a steady stream of men zip in and out those doors, trying to blend into the store clientele as quickly as possible before they were ID-ed as pervs . Often there was a separate cash register in the back room where clients could pay for sleaze unobserved. Kay's had a register on the second floor, just outside its back room.

Additionally, there was a huge archive section of old, pervy, softcore stuff stretching back to the Fifties, particularly paperback sleaze fiction and the old Irving Klaw bondage stuff, a lot of it featuring Betty Page! Fifteen years earlier, selling this material was risky business that attracted the attention of the law, but by 1980 it was considered quaint, naughty retro. This was the wondrous thing about Kay's. They carried all the new releases, but had a staggering about of old stock. This was possible in the era before corporate big boxes. Nothing was ever thrown away. You could find virtually anything there, and it wasn't considered "collectible" in those days. It was simply old stock, all priced to move. It was the last era that was the case. A decade later, the price of this stuff shot up. I'd often buy old sci-fi mags from the Fifties, or detective paperbacks from the Forties, stuff that had been on the shelves for decades. Sometimes you'd pull a book from the top of a shelf and it would fall apart in your hands, the glue having turned to dust. Needless to say, you quickly shoved it back in the shelf before Mrs. Kay saw it! Sturman was extremely reclusive, unlike Hugh Hefner and Larry Flynt. Few knew his name. He never gave interviews or allowed his photo to be taken. He was a secret kingpin atop a secret economy worth billions. He became insanely rich, and bought protection. Cleveland's government and police have always been corrupt, so we can assume there were many who were on Sturman's payroll. The powerful Cleveland Mafia never crossed him, and Sturman was never targeted in the car-bomb mob wars, so obviously there was an alliance there, as well. Sturman reportedly paid huge kickbacks to the Gambino crime family in New York City.

There are even rumors that Mrs. Kay and Sturman were an item at one time! Mrs. Kay was a formidable and intimidating battleaxe when I frequented Kay's, but she was reported to be quite a looker when she younger and she and Sturman both hailed from the same Jewish section of the city. But I'll probably never nail down the true story there, if there is one.

I've had a helluva a time finding photo reference for these back rooms. Not surprisingly I suppose. They're all long gone now. There's one Cleveland newsstand left that has a back room, but the dude that runs it can charitably be described as nuts, so I don't think he'd take kindly to me taking reference photos. It was a great newsstand at one time, one I shopped at regularly for zines and offbeat publications back in the Nineties. It was run out of its original location on a main drag because the back room attracted protests from family-values types and headline-seeking politicians. I can't believe it's still open, not just because back rooms are so outmoded, but because newsstands themselves have all gone the way of the dinosaur. In fact, it may well be the last newsstand in the city, where once they were over 100.  But I think I've gathered enough reference online. I drew a peep booth in PR&TP and that was the most difficult of all to find reference for.  There just weren't any photos of these things, for obvious reasons. I'm assuming they're all long gone, too, replaced by the intertube. I finally found one fuzzy photo after weeks of searching that enabled me to draw a booth. Yes, I'm happy to report I never set foot, or any other part, in one so I had no clue what they looked like.

I plan to work some of this into The Baron of Prospect Ave. But for now, it'll just be limited to a quick glimpse of the back room on the second floor, and to Boner Bill.