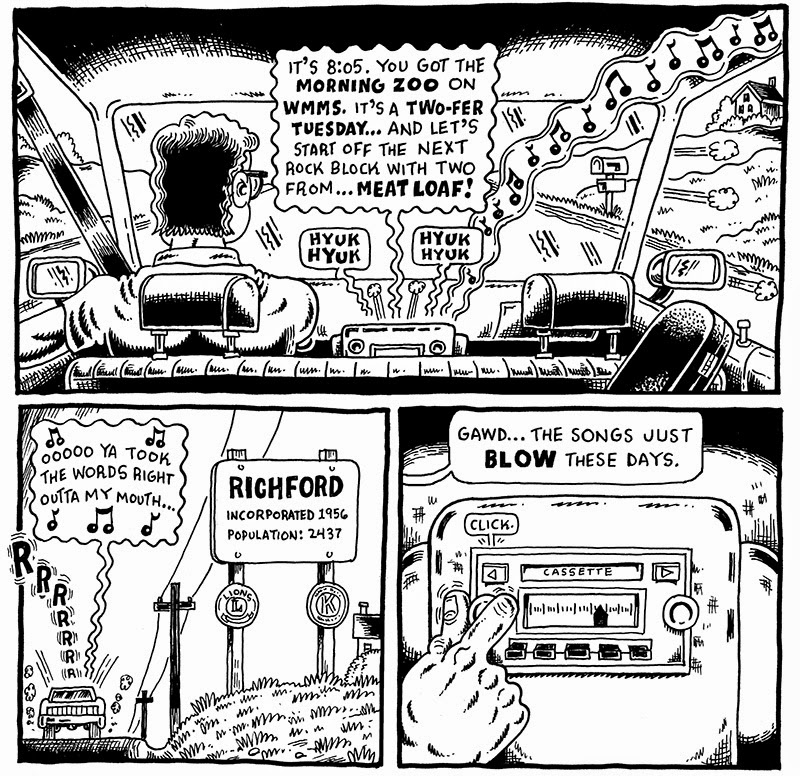 I've been pondering the whole Classic Rock format lately. Why? My 14-year-old daughter always switches on one of the three local classic rock stations when we're in the car, because she doesn't like my "weird" music on the college stations. It's strange enough to have a teenager listen to the music of my era, now some 40 years in the rear-view mirror, but even more than that, I find the whole construct of classic rock to be, well, ... bizarre.

It seems to be a playlist right out of mainstream 1980: lots of arena rock staples. But why 1980? Why not a playlist culled from, say, 1975? Or 1972? Who decides these things? What curious marketing formula came up with this playlist? Why does it endure, virtually identical, in every city in the land?

It's not even an accurate copy of Seventies rock radio. The formula cuts out 75 percent of the rock radio playlist from my day. There's absolutely no punk or new wave, even the pop hits, which did worm their way ocassionally into the FM playlist back then. Classic rock has lots of Zeppelin, Aerosmith and Floyd (always fucking Pink Floyd, then and now, Floyd, Floyd, Floyd), but rock radio in the Seventies also constantly played the Beatles and the Stones and the Who. You didn't hear a lot of the Airplane or the Dead. That shit belonged to the previous generation. Curiously, they still played Janis and Crosby, Stills and Nash, though. Not a lot of Doors then, which, of course, classic rock does play now. I ponder this purely out of curiosity, not because I particularly care. I'd like to know the thinking that goes into the classic rock formula. What marketing logarithm spit this thing out?

Here in Ohio, the rock radio format was invented and perfected by one station, the legendary WMMS, aka The Buzzard. On the flip side, punk rock was created here, too! Arena rock bombast vs. DIY punk. By the end of the Seventies, these two great musical forces slammed together in a cultural train wreck that left the industry in shambles and essentially spelled the end of rock-n-roll as a major force.

WMMS dominated the airwaves like no other had ever done in a single market and became the voice of an entire generation. For Otto, living in a fictional small town outside Akron, WMMS would have been his default station, as it was for every kid. In the Seventies, if you were between the ages of 13 and 30 and lived in the northern half of Ohio, you listened to WMMS, which was known simply as MMS or The Buzzard. You covered your car in MMS stickers, you wore a lucky Buzzard concert shirt to every stadium show, and you peeled out of the school parking lot with MMS blasting from the car stereo as you pumped your fist out the window. It was the station that ruled the hearts and minds of teenagers and twenty-somethings, and ruled the airwaves.

In 1970, it was an insignificant freeform rock station on the seldom-listened-to FM band, owned by a loathsome Cleveland radio entrepeneur who was infamous for his cheapskate  rule and unpleasant personality. The DJs programmed their own shows. One would put on a King Crimson LP, then pass out in the control room and let the entire side play. Another stripped and did his show in the nude, because the owner wouldn't spring for an air conditioned studio. But just five years later, it was the most powerful rock radio station in the country, thanks to a young station manager, John Gorman, with a vision and a genius for promotion. Under his direction, WMMS became a behemoth that broke then-unknown acts like Springsteen and Rush, could sell out an arena show in 10 minutes and turned a failing Rustbelt town into a rock-n-roll market whose passion was unparalleled. 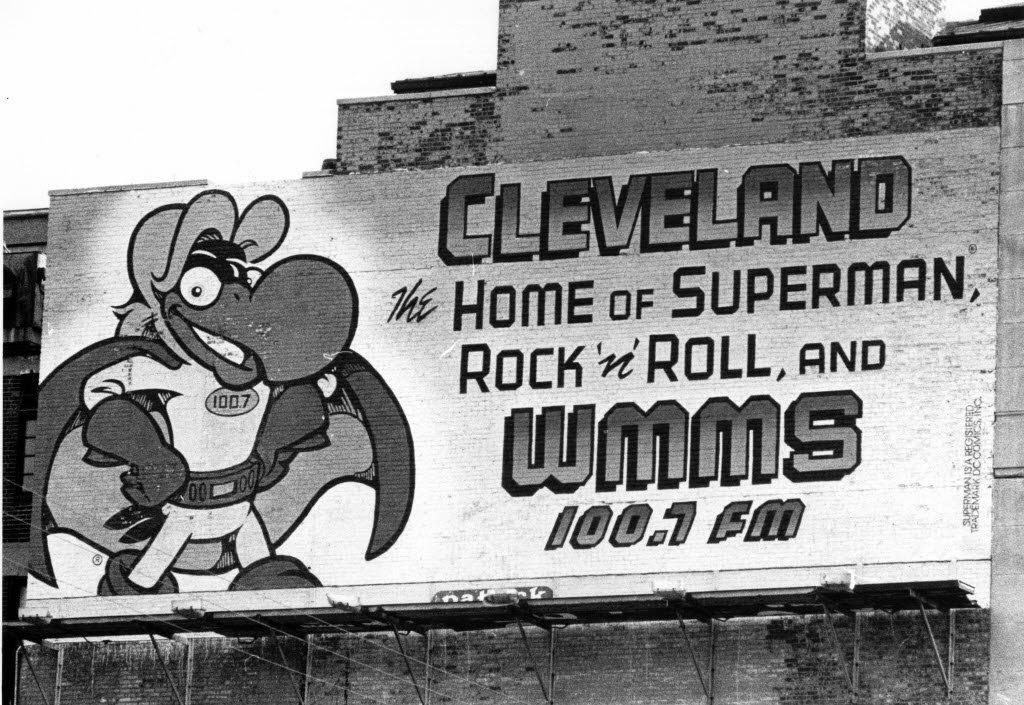 WMMS was a promotional juggernaut. Radio in the US has never seen a station like this, before or since, mainly thanks to Gorman. He did more than transform an obscure FM station into a behemoth, he made MMS the personality of a youthful Ohio.

He plastered the city with billboards, filled record stores with MMS paraphernalia, all starring the goofy cartoon Buzzard (a nearby National Park is renowned for its native buzzards, that's where it came from), carted a giant inflatable Buzzard to every stadium show the station promoted. Wherever there was rock music, WMMS was there, in force. In the days when Cleveland (even more than it is now) was known as the Mistake on the Lake and was mocked by Johnny Carson every night, MMS was the delusional cheerleader of Cleveland that single-handedly turned a battered factory town into the "Rock-n-Roll Capital of the Universe!" CLEVELAND ROCKS became the bellowed response to any and all who put us down. All thanks to MMS.

I remember MMS somewhat fondly. It was, after all, the soundtrack of my youth. During my long afternoons in art class, MMS played on the stereo. It is indelibly entwined with my memory of my scholastic art career, as I was bent over a board scribbling out comix and weird cartoons of Dahmer.

I also grew to loath the station. Its playlist was, of course, horrible. Fist-pumping arena rock anthems for stoner morons and party girls. If punk rock was a middle finger to the rock-n-roll establishment, MMS was the house organ of that establishment. 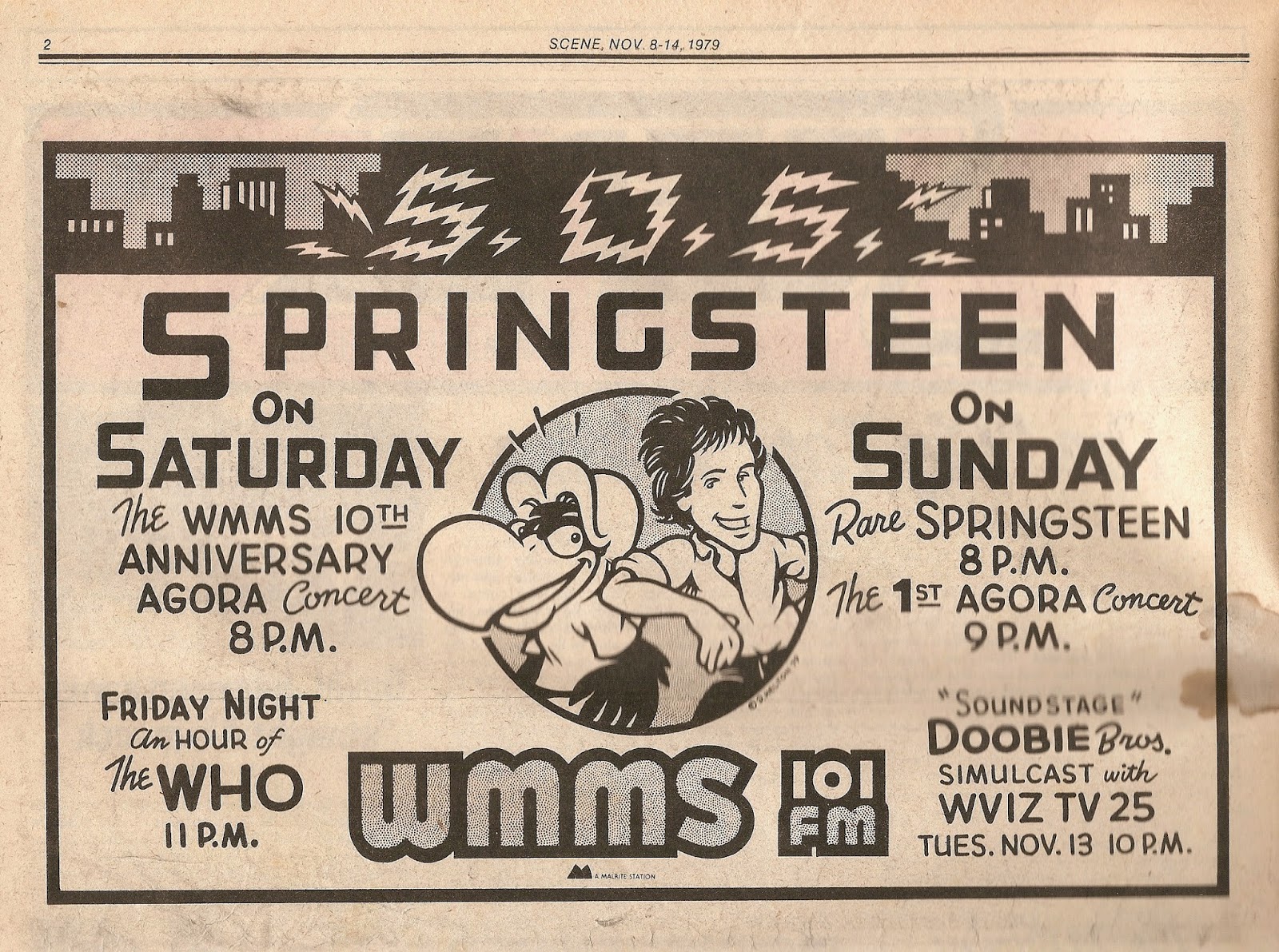 You couldn't be a kid and not listen to MMS. You woke up to Jeff and Flash in the morning, telling stupid stoner jokes, you cranked it in the school parking lot at lunch while hanging out in your van and sneaking a bowl, you blared it as you cruised over lonely country roads in the evening. Unless, of course, you were a weirdo nerd who liked this new punk rock shit. Then you were crap out of luck.

For a station that trumpeted how awesome rock-n-roll in Cleveland was, WMMS totally ignored all the seminal punk bands that crawled out of the Cuyahoga River ooze in the Seventies. You never heard Devo or the Dead Boys on MMS. The Cramps? No way. Pere Ubu? Oh please. The one exception was Rocket From the Tombs, who somehow scored a live Coffeebreak Concert in 1974. The sonic monster of punk playing on MMS at LUNCHTIME? How the hell did THAT happen? This was when MMS usually offered an Eagles Rock Block or a Twofer Tuesday from Heart! This unexplainable choice proved to be a huge boon to music fans, since it's the only professional recording that exists of RFTT! Naturally, MMS never played them again.

I, of course, was in high school in the late Seventies, one of that WMMS generation. As my interest in punk rock grew, my connection to the mainstream youth culture that was around me grew smaller and smaller. In some bullshit romantic way, that sounds cool, the solitary outsider, but in truth, it really sucked.

The people in charge of rock radio, you see, hated punk. Right from the start, programmers and DJs regarded it as some kind of threat, a bunch of unbathed twerps with stupid hair who couldn't play their instruments and were impugning the integrity of true artists like Emerson, Lake and Palmer. That's no surprise since these guys were all in their Forties by then, and digging the fame and success that came from playing ball with the music industry. No one wanted some snotty punk kids fucking up the money pipeline.

I remember when the Pistols Anarchy in the UK single first came out in 1976. The Pistols were already making headlines for their antics, even though they were only a live band. They were being held up as an example of the "Can you believe these kids today? Society is doomed!" thing by mainstream media who were too square to get the point. MMS' star drive-time DJ, Kid Leo (who looked like a stereotypical record company weasel with a greased-back pompadour) got ahold of a copy before anyone else in the states. I dunno, maybe MMS flew someone over to London to get the damn thing as it came off the stamping press. I happened to be listening in my Vega the day the played it. They'd been building it up all day. I was really amped to hear it, since I'd never heard the Pistols at that point. So Leo starts playing it, then pauses it to rant about how lousy it is. Plays some more. Another rant. This goes on for the whole track! I was screaming at the radio in outrage. The Leo takes it off, assures listeners they'll never hear something that awful again, proclaims "let's hear some REAL rock-n-roll" and puts on Journey or something. Arrrrgh.

In End of the Century, Danny Green, manager of the Ramones describes the attitude of rock-n-roll radio stations like MMS in the Seventies as punk began to surge:

"And when (punk rock) records went around to radio stations, intuitively, they'd say, what do I know about them? They're trouble. If we play their record, we'll probably have to have them here and they'll throw up on the console and wreck the studio and... don't play the record! It's easy! Don't play the record!!" 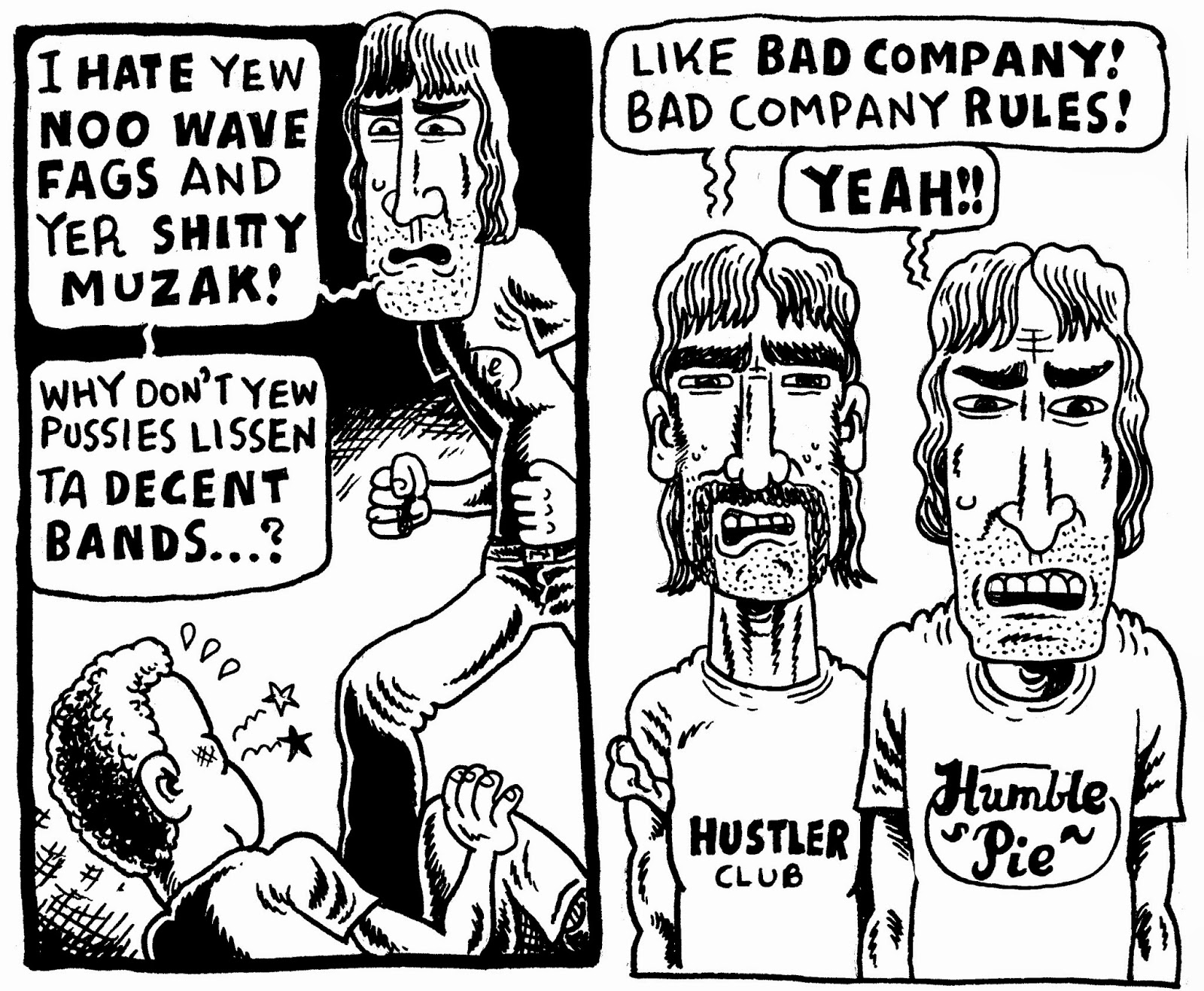 It went even deeper than that. There were record stores that wouldn't carry punk records, because they'd, I dunno, infect the "real" rock records or turn off their loyal clientele, as if the very presence of Rocket to Russia would cause Springsteen fans to flee from the store. And, quite honestly, the vast percentage of teenage listeners did indeed share this animosity toward punk rock! My contemporaries would react violently to any and all punk music. I know it sounds absolutely crazy. That first Devo single, the cover of the Stones' Satisfaction, would send your average rock-n-roll butthead into a rage! I don't know if it was the music itself, or what the did to one of the great standards of rock, or what. But playing that song in the wrong company was like taking a dump on a Bible in front of a Catholic School football team. 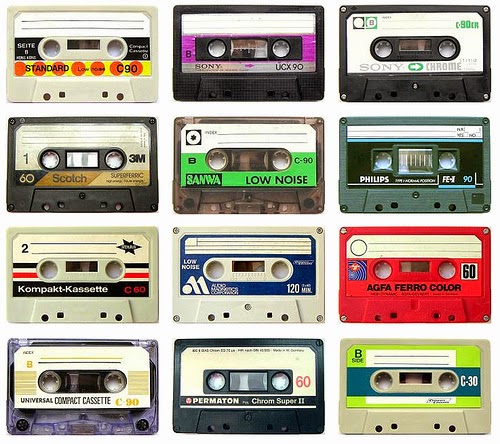 So radio was a no go for us. At home, we could listen to our records, but what could we do for tunes on the go, in the car or at the beach or hanging out? Remember, this was before the internet, before iPods, hell we didn't even have Walkmans! College radio hadn't started up yet, either. The only option, if you weren't listening to terrestrial radio and its nauseating diet of Skynnrd and Thin Lizzy, was... the cassette tape. It was the latest recording technology. The record companies hated it, because they wanted kids shelling out $7 for an LP, not borrowing a buddy's records and making a mixtape. In fact, the only way blank tapes were allowed to be sold in the US was with a surcharge tacked on the price that went to the record companies to compensate them for "stealing" their music. Buy a blank cassette today and you'll still pay that surcharge!

That's what punk rock was: a couple hundred hipsters in every city sharing cassettes with each other.  I still have a soft spot for cassettes because of that. It was part of the punk aesthetic. The punk mix tape replaced the radio. It was the first crack in the stranglehold terrestrial radio had on music. For the first time, kids had an option to the bullshit that was coming over the air. 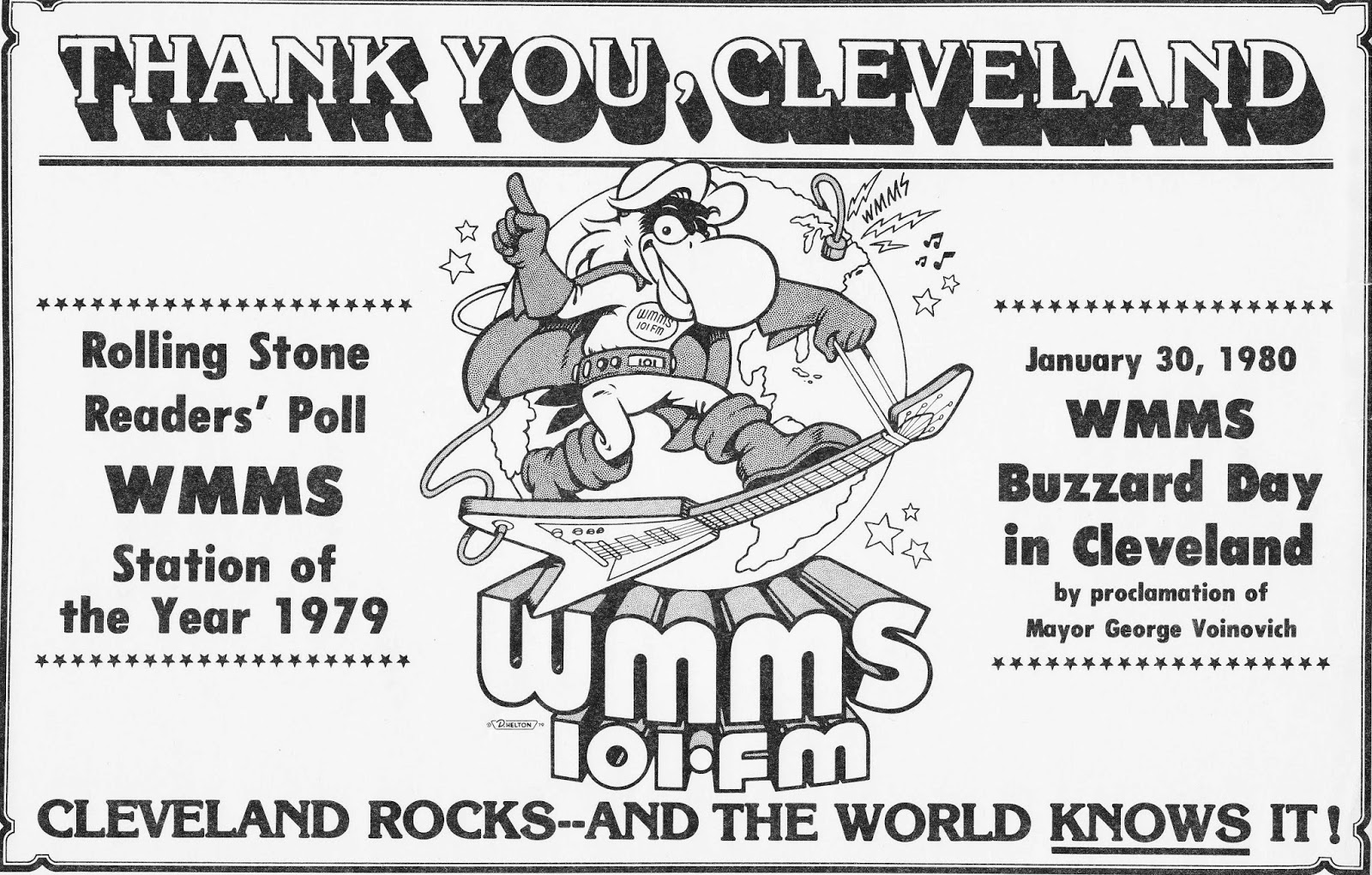 John Gorman wrote an excellent book about  WMMS. It was a surprisingly enjoyable read. The accompanying website is even better, full of clips and recordings. A glimpse of a time when FM Rock Radio ruled the world. HERE