The Derf daily strip that never was

Here's an artifact I've never shown before. These are sample strips from a proposed daily comic strip that I shopped around 26 years ago, in 1988!

I didn't even have a name for it, but the basic premise was a chunk of food is left too long in the back of the fridge and comes to life. Hilarity and strange doings ensue.

If you wanted to submit a comic strip to the syndicates in those days, there was a very specific process. Violate it, and your stuff was immediately hurled into the dumpster. There were only five or so syndicates. They controlled every daily comic page in the land. That, of course, was the problem and those pages were full of lame dreck like Blondie and Andy Capp that were drawn by dead guys. Or rather, by the original creator's kid or longtime assistant, who had learned to copy the dead creator's style. Corpse strips, we call them. There was almost no room for new work. So a creator submitted six weeks of dailies. No phone calls! Syndicates received hundreds of proposals a year and picked maybe two.

These are some of my sample strips. Fairly lame, but daily strips were already crap then (and soon to get far, far worse). The syndicates wanted easily-marketed strips that fit a certain niche: a strip for new parents, a strip for single moms, a strip for one-legged retirees, etc. They seldom took a strip that was just funny and weird and didn't have that hook. I wasn't interested in something like that at all, but thought this concept, a young urban couple and a creature with merchandising potential, would be enough of a gimmick to generate interest. My plan was, I'll get my foot in the door and then make it into what I want, work in some cranky satire, maybe some politics. Yeah, I was pretty naive and that would have been an ugly battle with corporate marketing suits. But generate interest it did. Universal Press wrote me back (no phone calls!) and requested six more weeks of dailies.

I spent a couple weeks cranking those out and mailed them in (no phone calls!). Then waited. Months passed, two, three, four. No phone calls!! Then I got the boilerplate letter: thumbs down.

Man, what a fucking scam! I do THREE MONTHS of strips for free and for naught? And then get blown off by letter? Screw that! This was the only daily strip proposal I would do.

Luckily during that four-month wait I experimented with freeform cartoons, which would eventually become The City. I had so much fun with those, and I liked what I produced so much, there was no way I wanted to waste time with a lowbrow daily strip for squares like this one.

So this is nothing but a curiosity, one I thought I'd share. You can see hints of The City here in the drawing style. This is a lot cleaner and... ahem... unchallenging. Daily strips were a lot smaller than weekly strips then, so accommodations had to be made. And of course, a corporate daily in Buttfuck, South Dakota doesn't want some scary underground drawing.

If you think the main character looks like Dilbert, and he sort of does, Dilbert didn't debut until 1989, a year LATER. So there.

Thank GOD Universal Press didn't buy this! I would have sucked into the sweatshop hell of cranking out seven strips a week. Brrrr.

Here's some of the proposal. It had a little more storyline continuity than appears here. 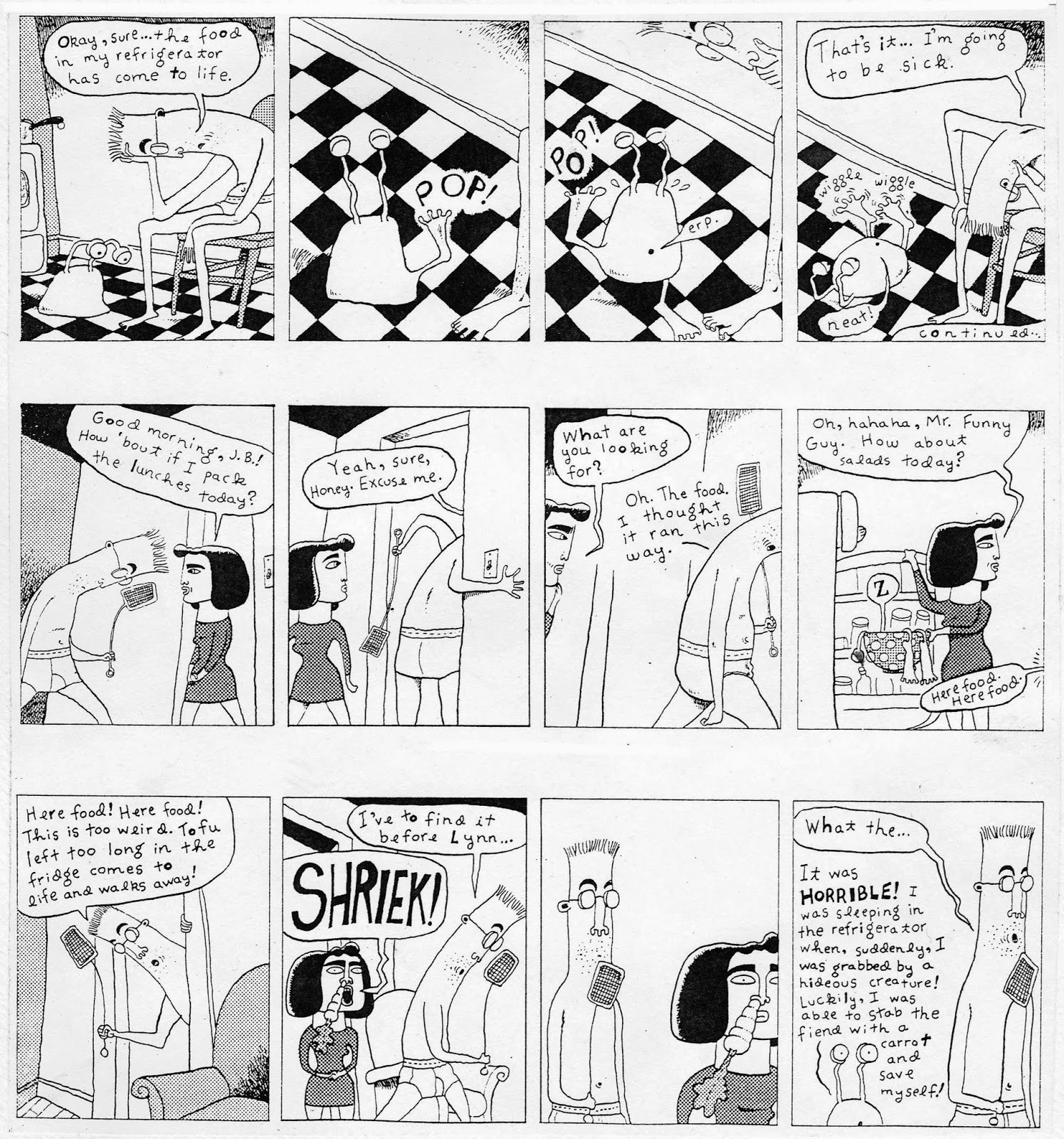 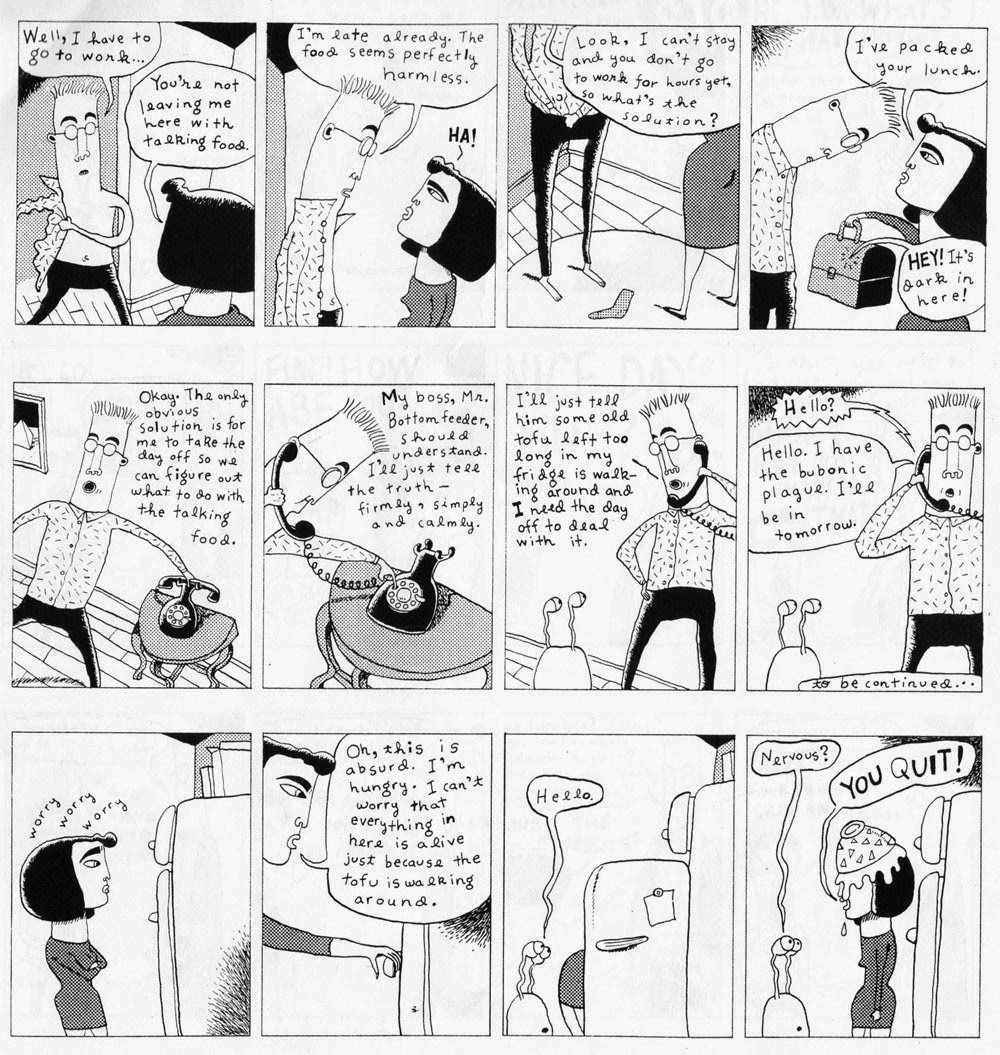 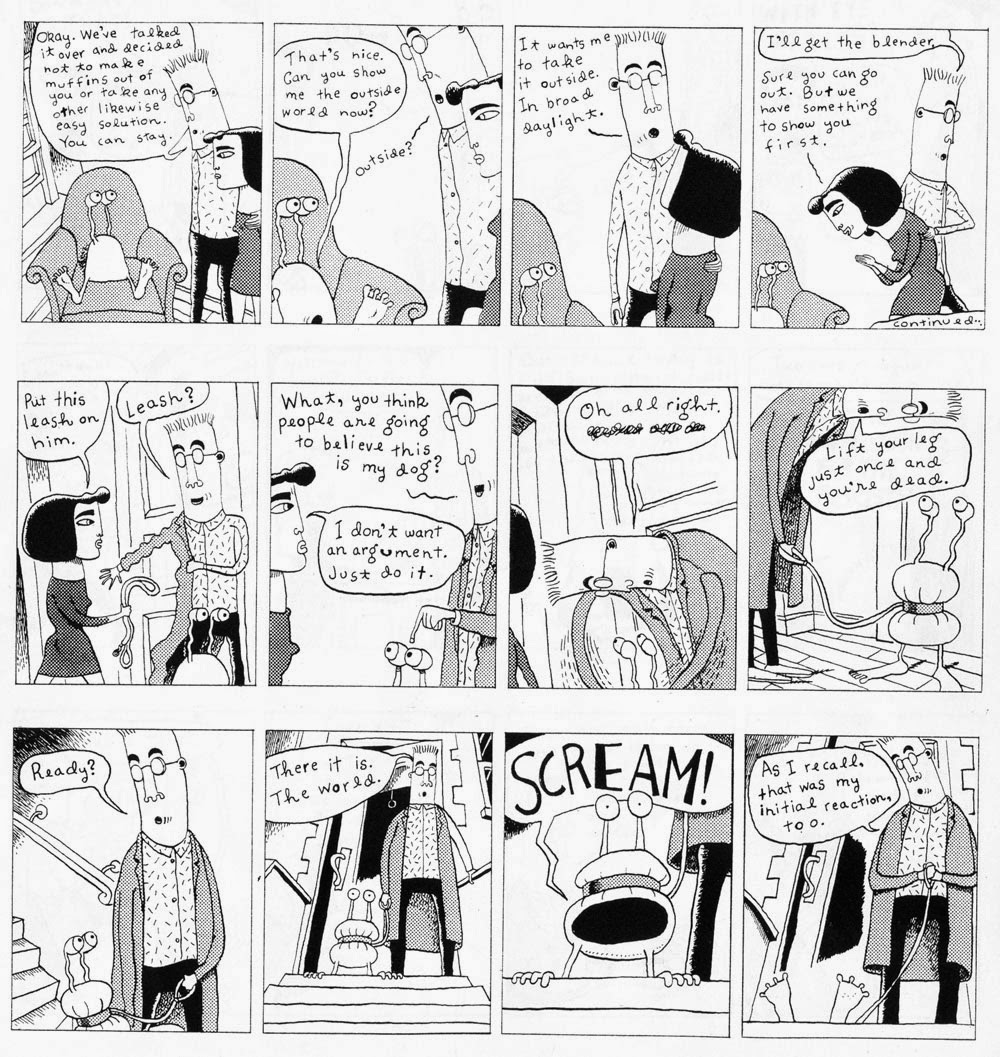