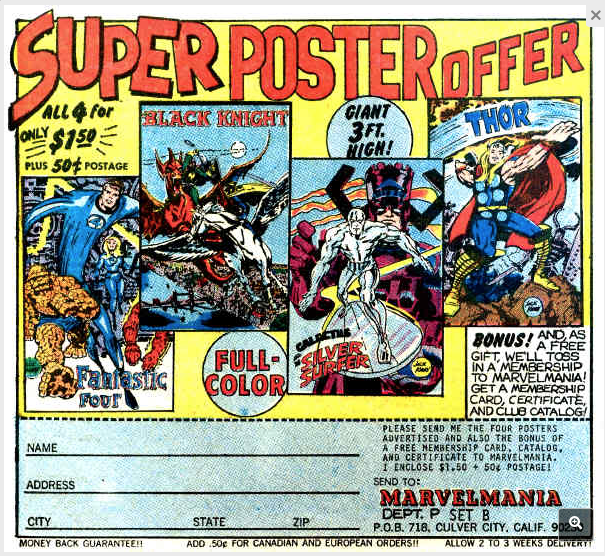 Back in 1969, Marvel unveiled its new a fan club, Marvelmania International. It replaced the first one, The Merry Marvel Marching Society, which was in operation from 1966. Marvelmania was a fan club in name only. It was really a mail order firm that purchased merchandising rights from Marvel, not a fan club. It was a sleazy operation from the get go and one of the great little-known tales of the Bronze Age.

The mastermind of Marvelmania, the mysterious and elusive Don Wallace, was a 40-year-old former Marine judo instructor who had owned a number of low-end manufacturing companies in Los Angeles. His link to comics is unknown. Perhaps he just saw an opportunity. He made a sales pitch to Marvel owner Martin Goodman to start a "fan club" that Marvel wouldn't have to operate. It would be a separate company  Wallace would do it all. Marvel would get its cut and have none of the hassle. Goodman green-lighted it, happy to shut down the company-operated Merry Marvel Marching Society and offload the fan club shit on an outside operation. This is long before Disney and $1 billion movies and corporate tie-ins. Marvel was a shoe-string operation in 1969. The MMMS was entirely run by Marvel's secretary, Flo Steinberg, who had just left for another job. Wallace hired neophytes (but fanzine veterans) Mark Evanier and Steve Sherman as editorial staff to produce Marvelmania Magazine and rented a warehouse in Culver City for the mail order stuff. He made big promises of financial windfalls to creators like Kirby and Steranko and coaxed original work out of them, and assembled an impressive catalog of posters, decals and other Marvel paraphernalia. These wares were pushed in every Marvel mag throughout 1970 and 1971, along with the usual breathless accolades and "Face Front!" cheers from Stan Lee on the Bullpen Bulletins page.

Marvelmania offered 11 original posters during its short life, and they're all classics. 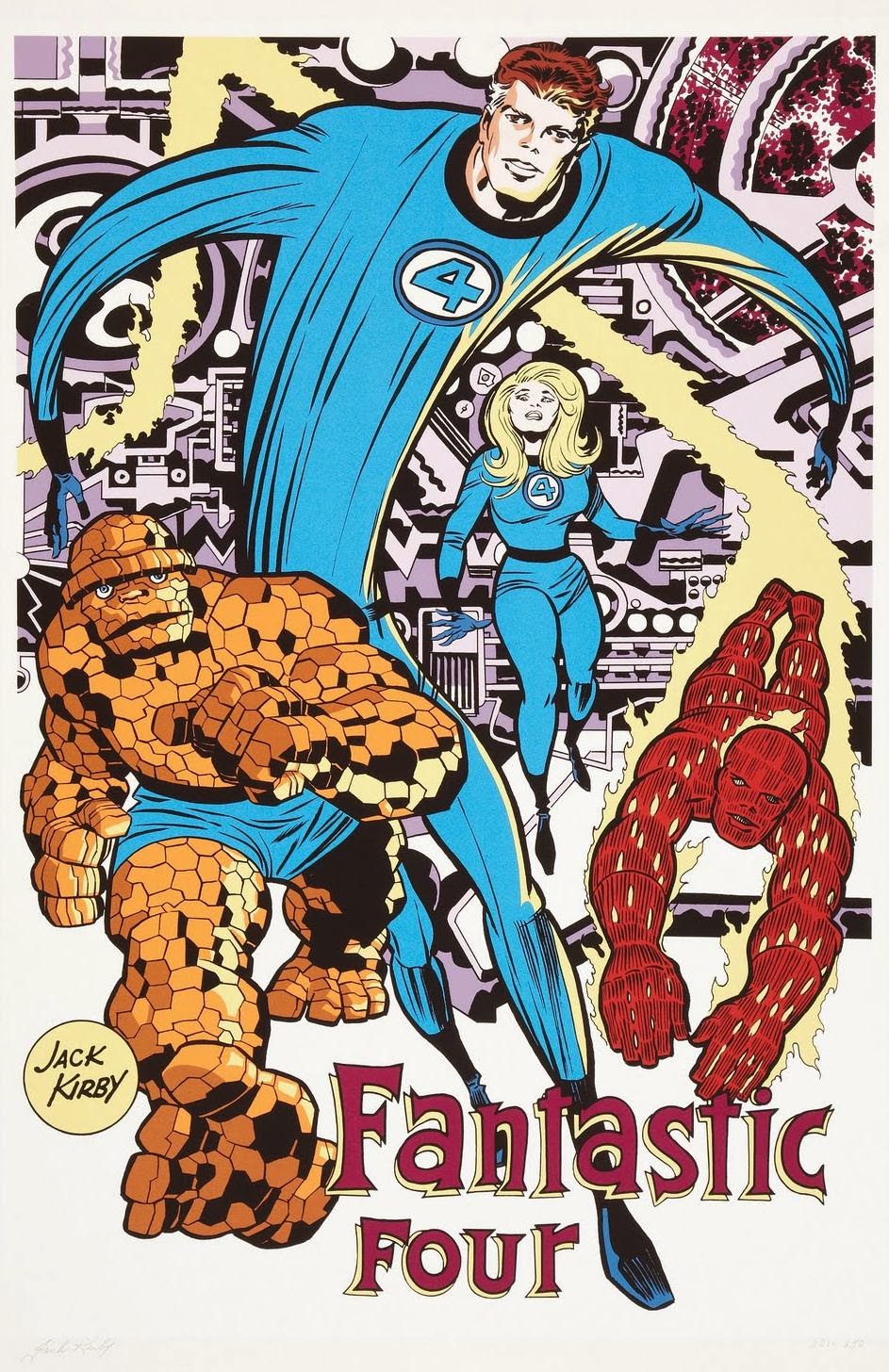 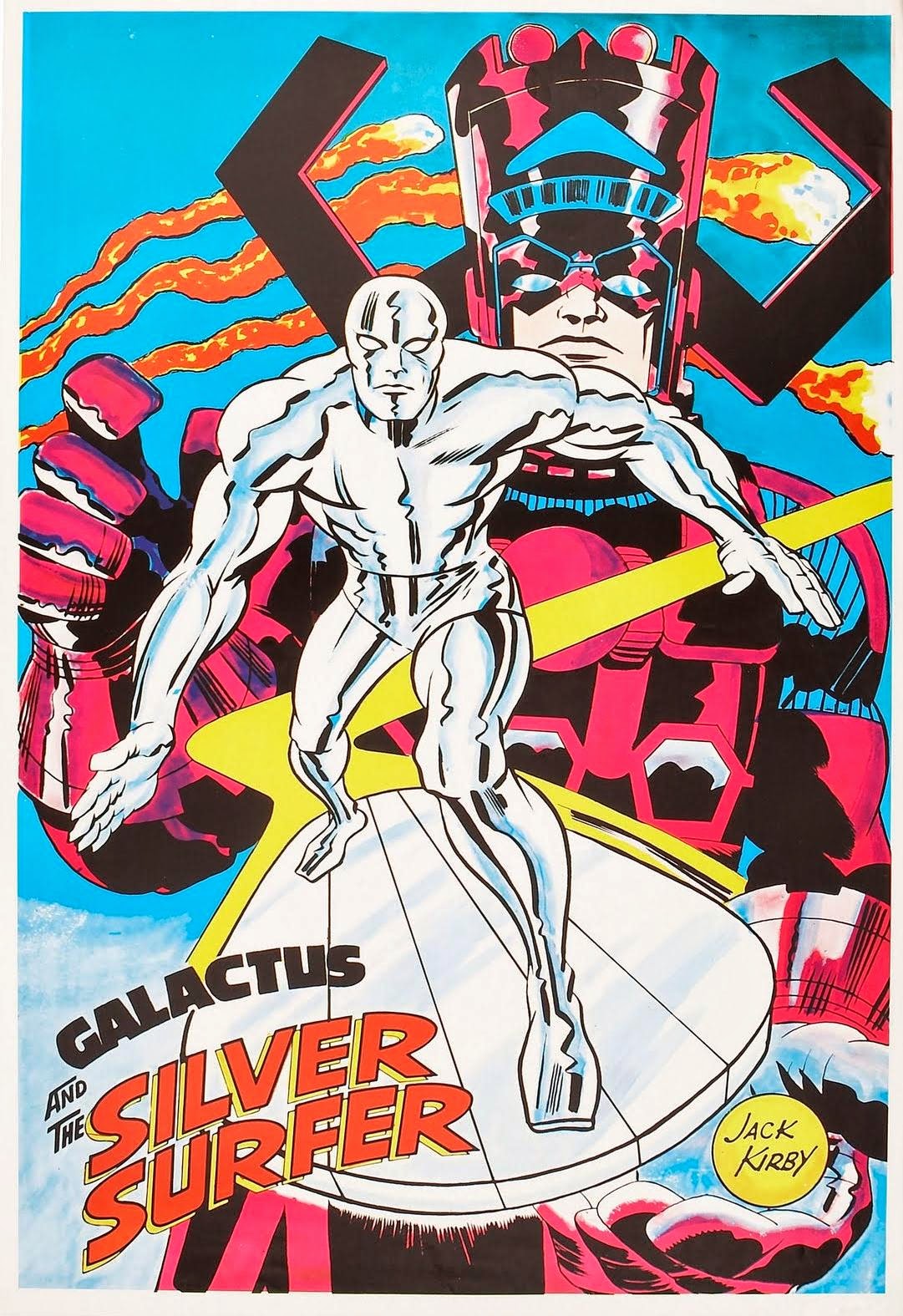 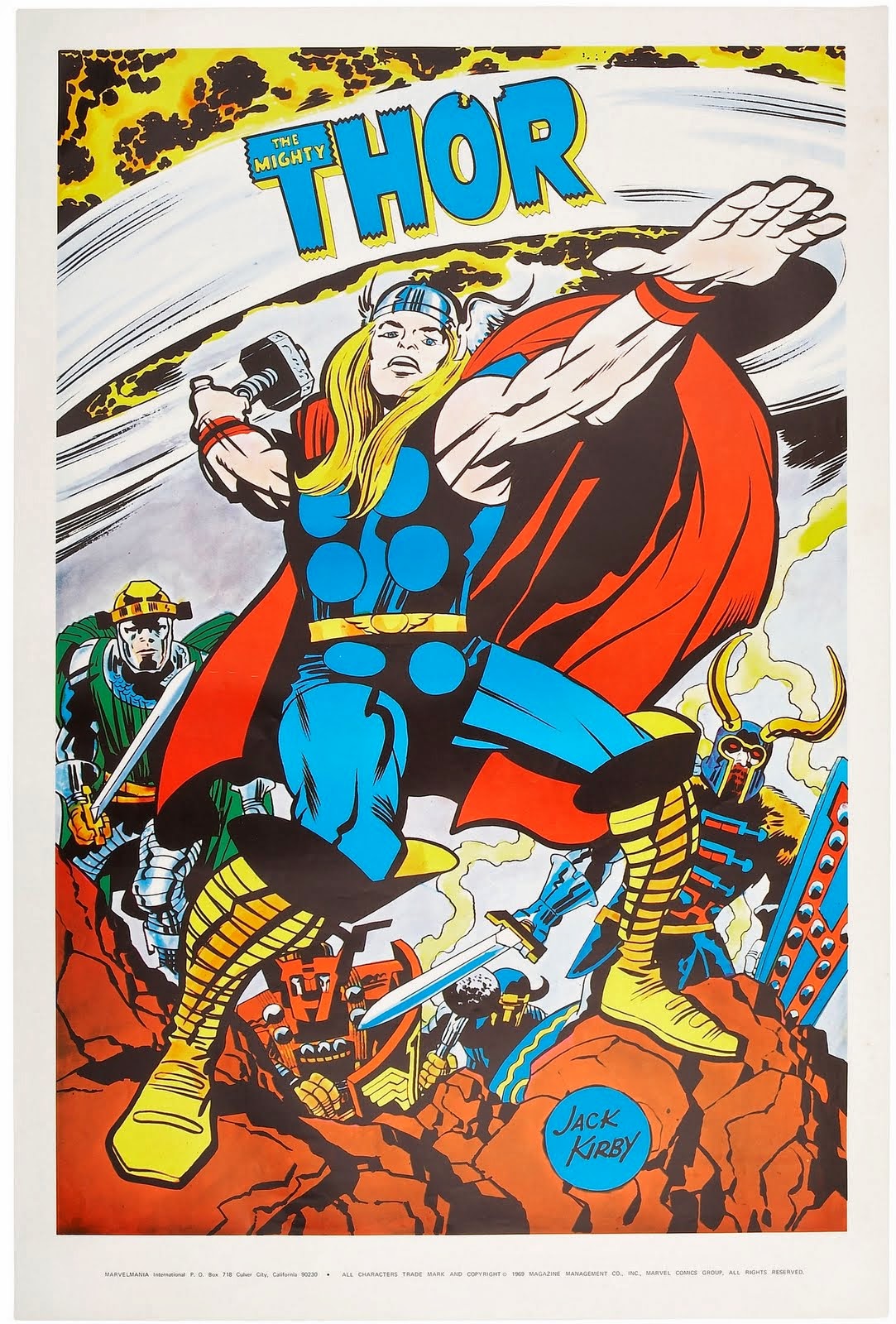 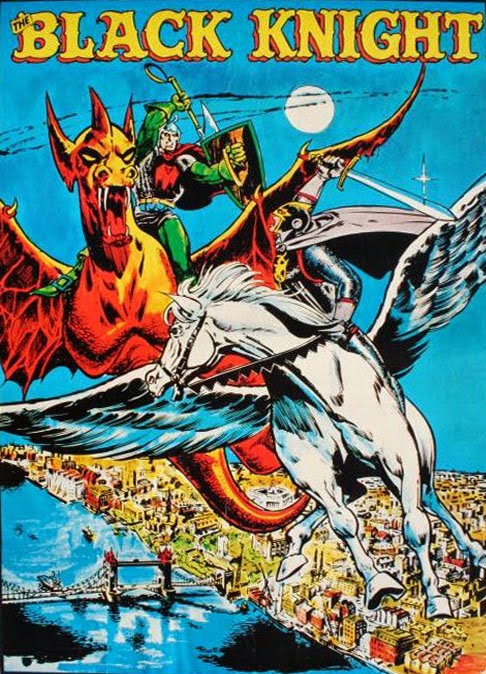 The first two poster sets were offered at the same time, each costing $2, including postage. The printing was nice, although the paper was pretty thin. Each poster was 2' x 3'. The above Set B was the best, featuring three original Kirby drawings that were both penciled and inked by Jack. Kirby never inked his own work, so these are rare indeed. He obviously felt Marvelmania was going to be a big revenue stream for him. Rounding out the set was, inexplicably, the Black Knight, credited to Howard Purcell, although it looks more like John Buscema. Why a minor character, who didn't even have his own title, along with Marvel's big stars? Who knows. Clearly a filler piece, but the three Kirby ones were well worth the two bucks. Even 1970 bucks. 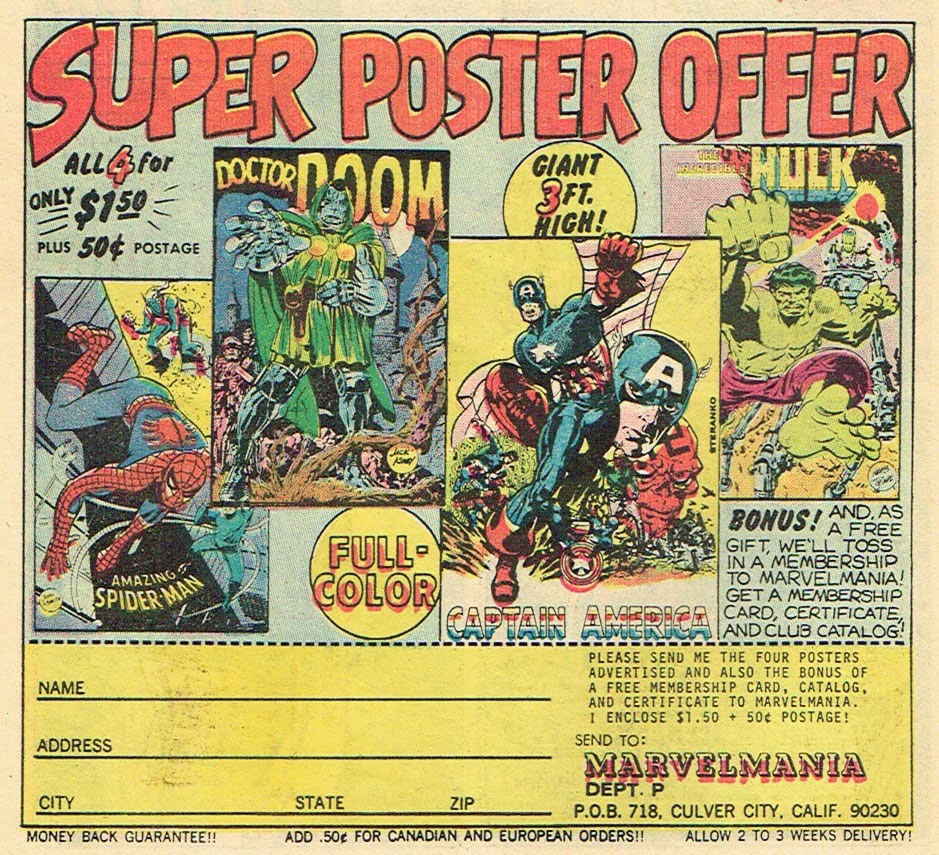 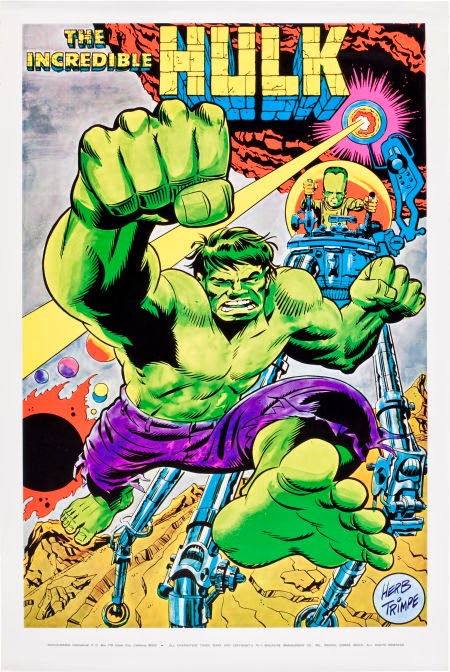 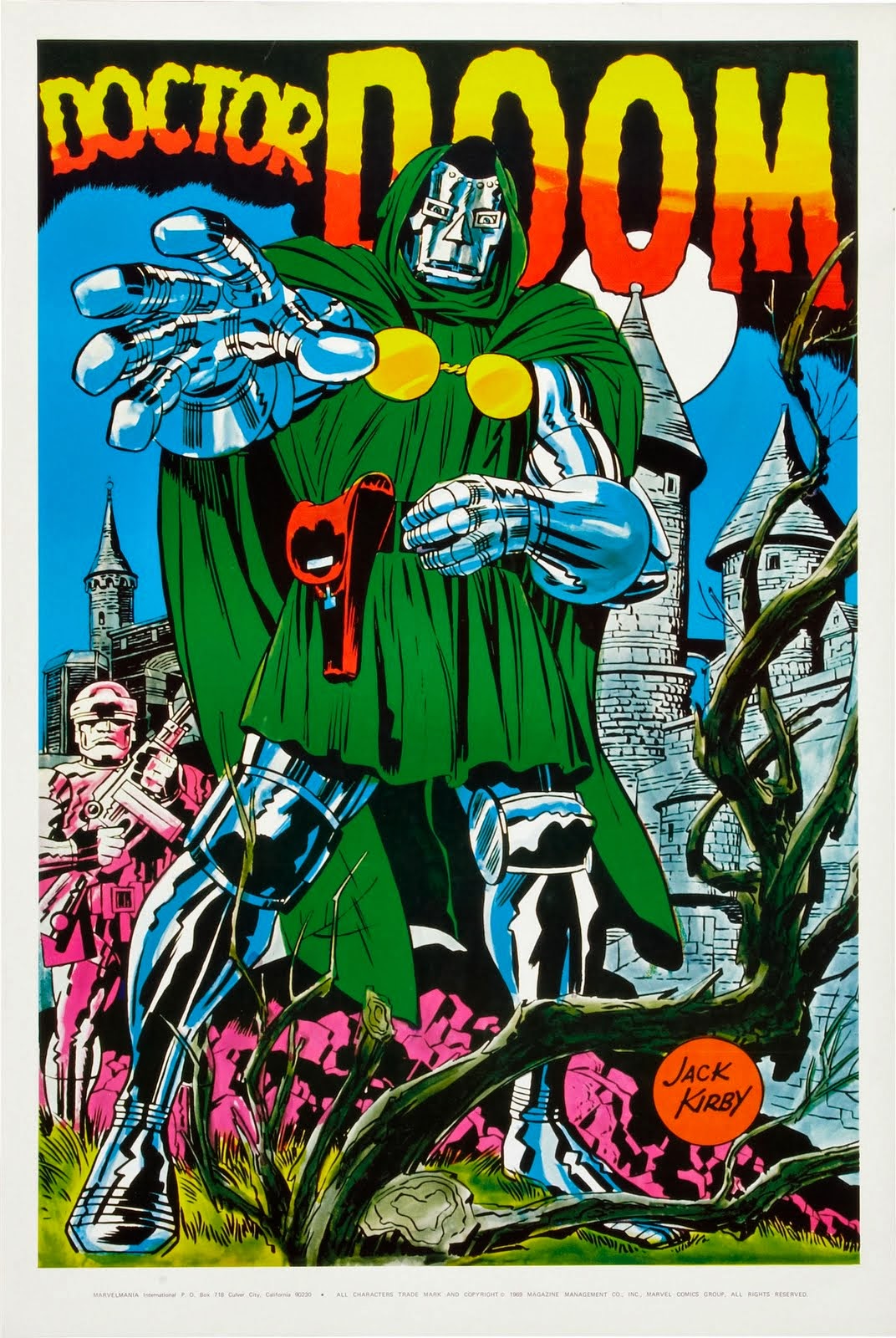 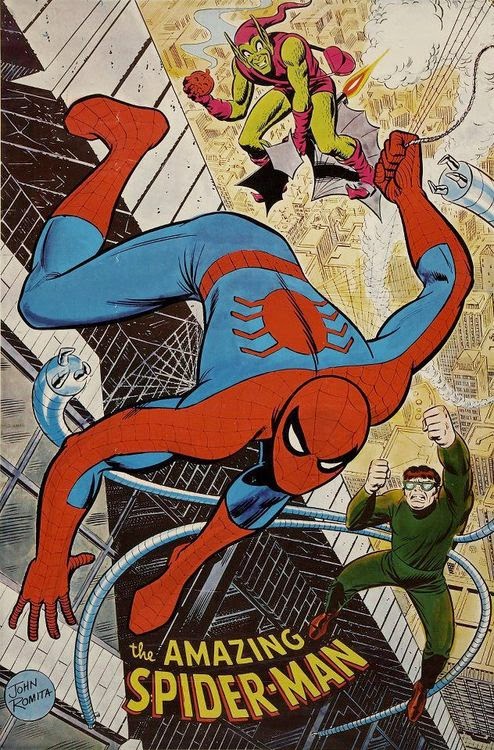 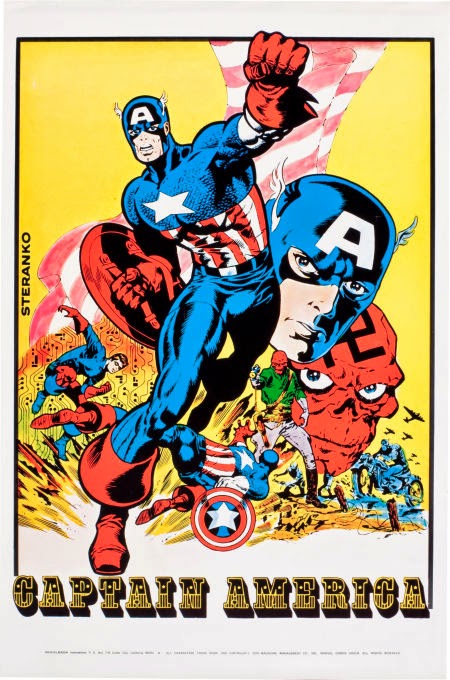 Set A was a beaut, too. Steranko's Cap was the big draw here, although Kirby's Dr. Doom is my personal favorite of all these. Look at that composition. Doom was featured in his own book at this point, the dual-feature Astonishing Tales, so it made sense Marvel was pushing him. The Trimpe Hulk and Romita Spidey are actually based on Kirby posters that Jack drew for Marvelmania. For reasons unknown, these were never used. I'm guessing because Trimpe and Romita were the regular artists on these books. Kirby couldn't have been happy about having them redrawn, even if that was par for the course at Marvel! 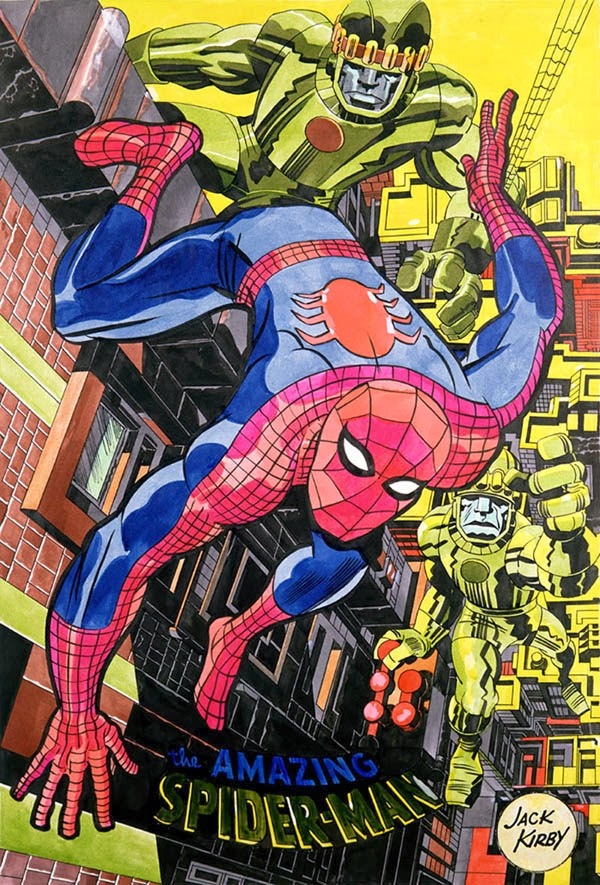 Here's the original Kirby Spidey. Note the Kirbyesque robots, which Romita swapped out for Doc Ock and the Goblin. Color was added many years later for The Kirby Collector magazine. The rap on Jack was that he was incapable of drawing Spider-man, a charge frequently foisted by Stan Lee, who probably had his own selfish reasons for stating that, as he usually did. It's not the greatest Spidey, but it's not bad. I, for one, would have loved to see Kirby draw an issue of Spider-man. He never got that chance. 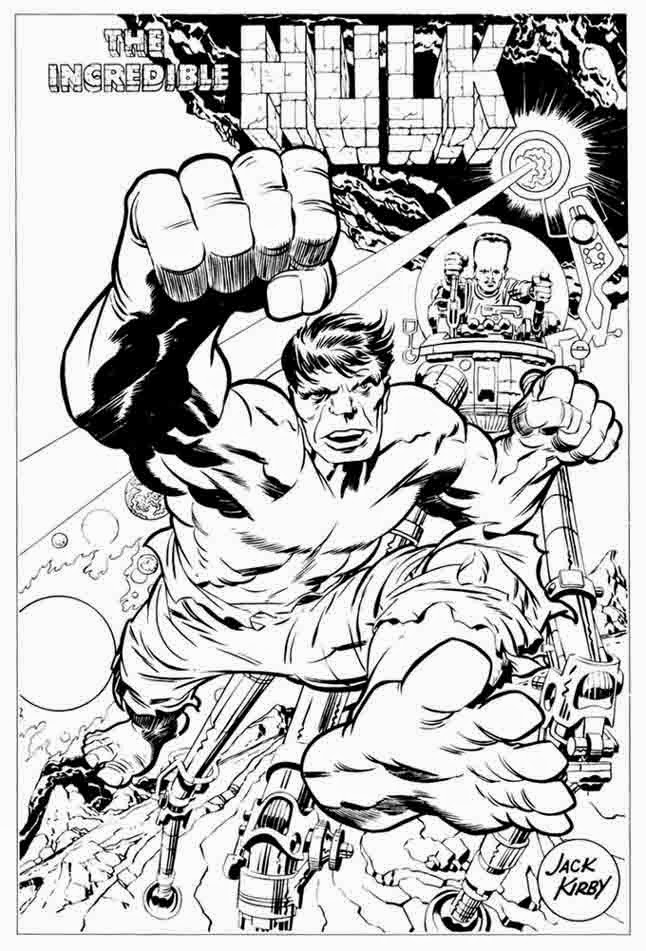 Jack's Hulk original above. Now what's the deal having Trimpe re-draw this? I love Herb's Hulk, don't get me wrong, but, unlike Romita, he wasn't one of Marvel's star artists. That just seems like a real slap in the face. No wonder Jack was plotting his departure to DC! 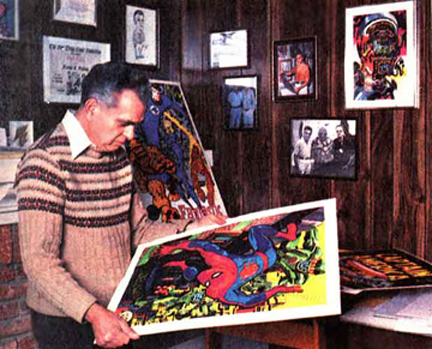 Here's Jack inspecting the first round of posters. Since the Spidey was never printed, this must be a color proof, or perhaps the original color stat.

I had all these posters, which makes me the rarest of young Marvelmania members: a kid who actually received what he paid for! The orders were raining in but Marvelmania's Wallace filled very few of them. $4 was big money to me then, since I could only coax $1 out of the Old Man for mowing the lawn, and he didn't approve of me "wasting" money on comic books. If I had lost that dough, all I would have gotten was a lecture from the Old Man.

A third set of posters in 1971 were all by Steranko, then the hottest creator in comics. It was his swan song. He was about to give up comic books altogether for publishing and illustration. Typically, he went out with a bang with this b&w poster set. 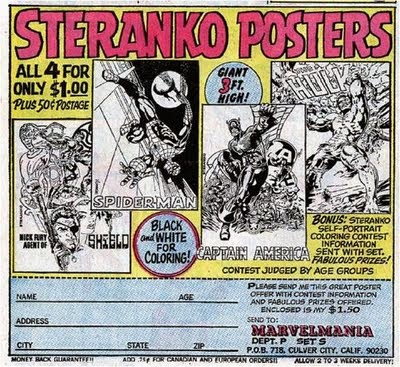 The Cap poster, with a slightly different design, was offered in the earlier Set A, in full color, but apparently none of these four were ever produced. Versions of the originals have popped up since. The Hulk drawing was later used as a cover for FOOM Magazine, part of the Marvel fan club that rose from Marvelmania's ashes, which Steranko himself ran! 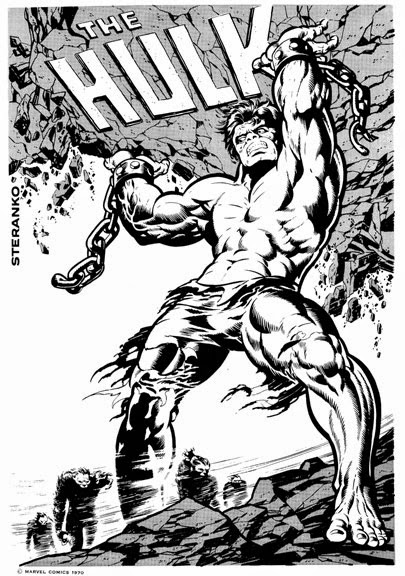 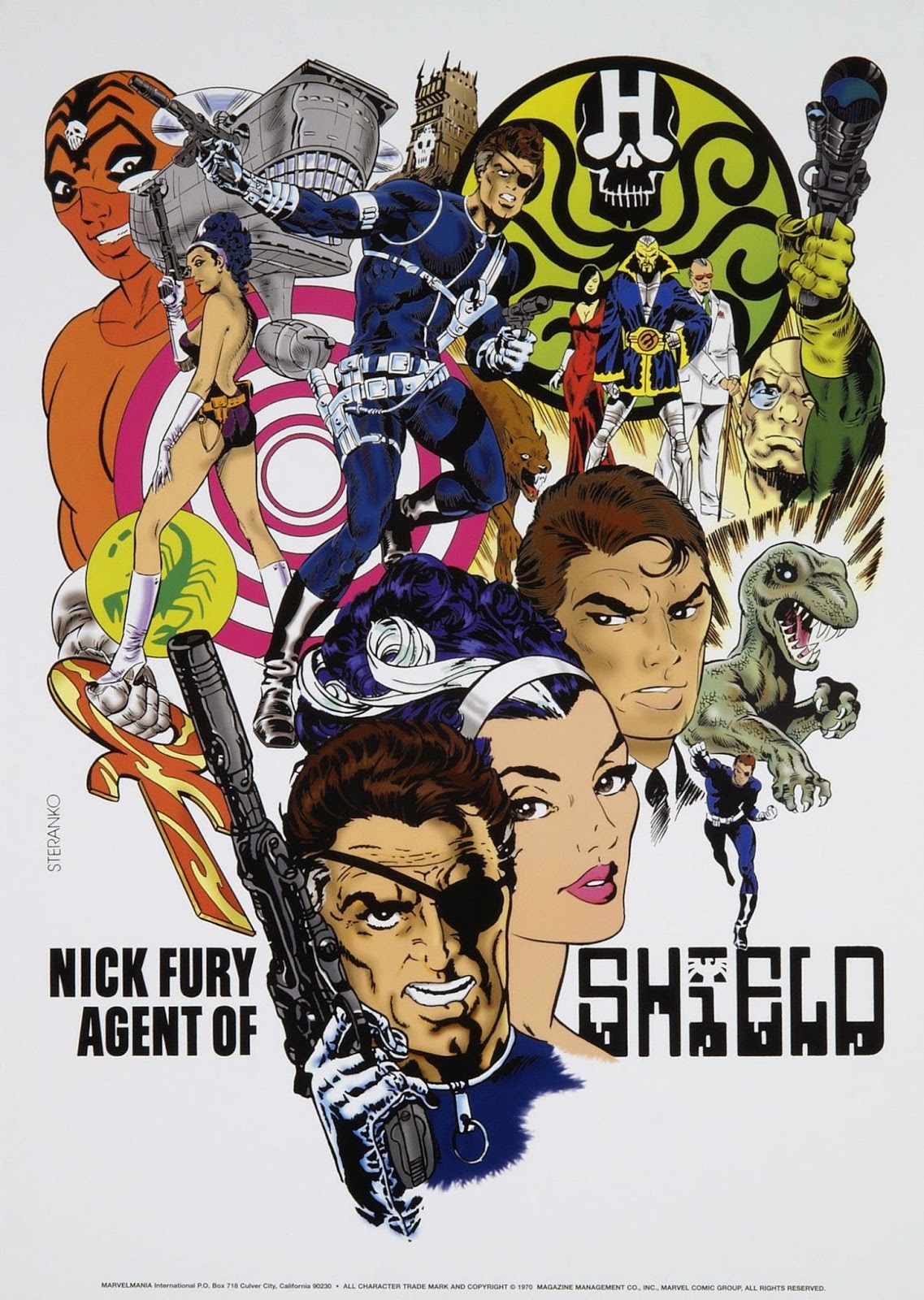 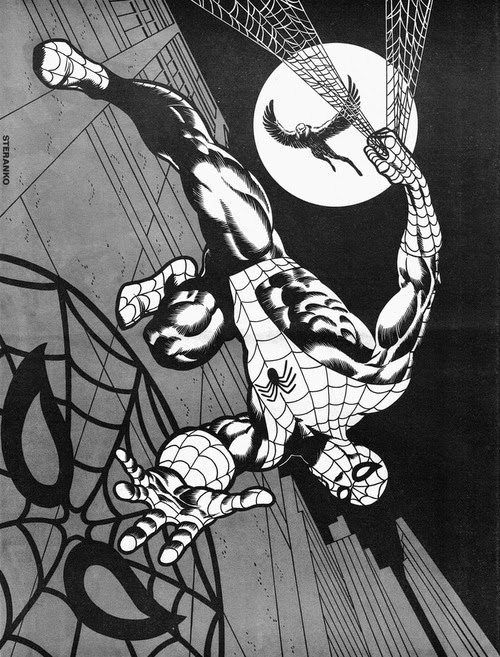 Plenty of orders were taken for the Steranko set, including my hard-earned $1.50. By this time, Marvel was being peppered with complaints of merchandise never received. It became a total clusterfuck and suddenly Goodman had a far bigger headache than the old MMMS fan club. And since Marvelmania was on the other coast, there was no way to reel in the operation. It crashed and burned quickly. Creators, who had not gotten the promised compensation, cut off Marvelmania. Sherman quit in disgust, and Evanier soon followed, but grabbed Kirby's original art for the posters on the way out, along with a large stack of Kirby original pages from his Marvel mags, and returned them to Jack. A grateful Kirby hired them both to be his assistants. After but two years, the postal scam that was Marvelmania International was done.

Ronin Ro in his book Tales to Astonish, describes the ugly end of Marvelmania:

Soon, creditors came after (Don Wallace). The sheriff shut him down, and the police sat there and took the funds as they came in the door. Employees who left work on a Friday arrived on Monday to find (Wallace) had cleaned the place out and disappeared.

Wallace would never materialize again.  No one knows what happened to him.

Marvel quickly yanked the Marvelmania ads from its books, but unfortunately the three-month lead time resulted in more fans being bilked even after Marvel pulled the plug. Naturally, the skinflint owner Goodman had no intention of refunding all the ripped off fans. There wasn't even an official  apology! All that signaled the end of Marvelmania was this item on the Bullpen Bulletins page in December 1971:


SPECIAL NOTICE: Just as this issue went to press, we learned that Marvelmania International, the club which has been advertising in our pages for some months, has been officially disbanded. No more memberships or orders should be sent to Marvelmania.

All that remains are the original posters, six issues of Marvelmania Magazine and a few other items. My copies of the posters disappeared long ago. Eleven year olds aren't known for the archival tendencies. I'd love to re-acquire a few of them, especially the Kirby ones. Anyone have any to trade in exchange for original art, drop me a line.
Posted by Derf Backderf at 10:18 AM