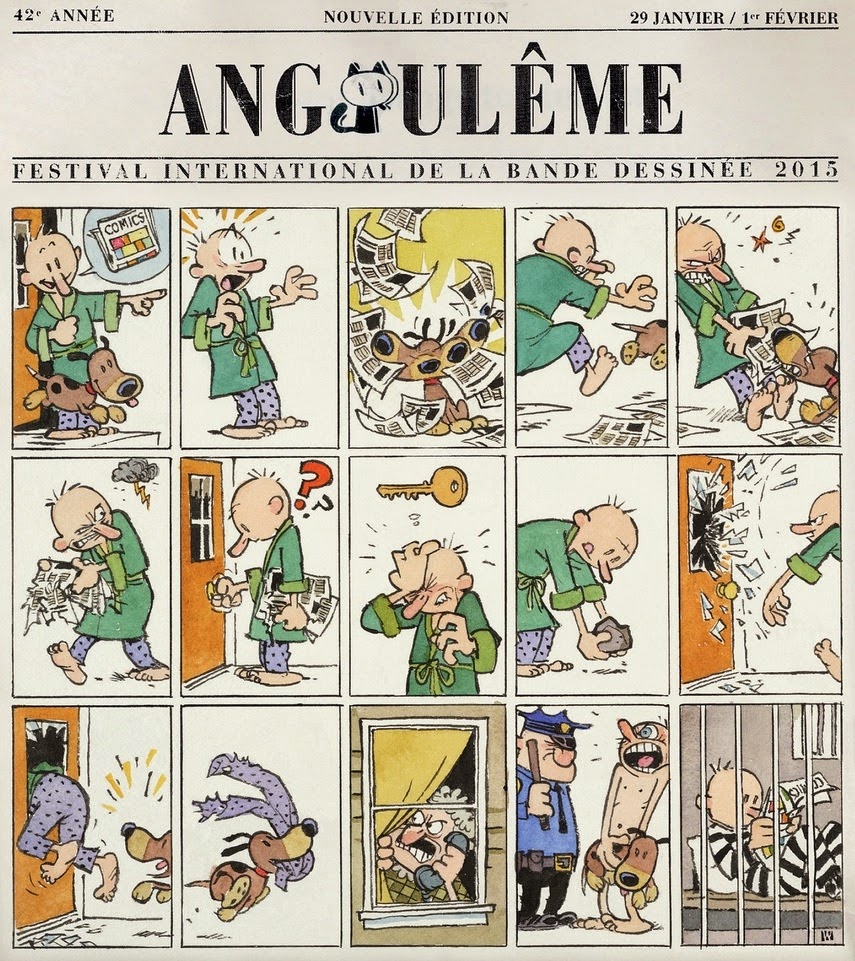 The Angoulême Comix fest just unveiled this year's poster, by Bill Watterson, and his fans are all agog. Fun piece. I'll pick one up for myself when I'm at the fest in January.

But, the story behind the poster is also getting lots of play in the comix press. Watterson was given the Grand Prize, which honors career achievement, at the last fest in January, the same fest where My Friend Dahmer also won a prize. He didn't show, or acknowledge the honor in any way, sticking to the recluse act that's been his thing ever since Calvin & Hobbes became a hit way back in the Eighties. At the award ceremony, which is a huge, wonderful event, Lee Salem, Watterson's editor at the Universal Press Syndicate, phoned in an acceptance speech. He didn't quote Watterson at all, not even a "Bill says thanks." As I recall, it was something odd like "I'm sure Bill feels quite honored." It was painfully obvious to everyone in the audience that Watterson either told him not to quote him, or maybe hadn't returned Salem's phone calls that he won the award! It was awkward. A lot of French reporters and fans asked me about it afterwards, me being a fellow American and all, and I could only shrug.

The tradition is the Grand Prize winner serves as sort of a grand marshal for the next year's fest, which would be the one this coming January. Apparently Watterson has told them to forget it and that this poster will be the extent of his participation.

I don't fault the guy any of this. To be honest, I feel kind of bad for him, that he's so reclusive that he can't even go to Angoulême, which is the single greatest comix event I've ever attended and was one of the highlights of my life.  If I could re-live that week over and over, like Bill Murray in Groundhog Day, I would. That would suck to be that paranoid about being seen, or being photographed or interviewed or whatever it is he's paranoid about. Mostly, to be perfectly blunt, I don't care, and I'm probably inviting a shitstorm of comments from his passionate fans with this post. What can I say? I'm a contrarian.

I myself was fairly reclusive for years. I don't even know why, to be honest. I wasn't paranoid or anything, just anti-social, I guess. It's not like I had a legion of fans wanting to glom onto me, or had corporate types wanting to buy my characters to splash on lunchboxes and greeting cards. But when My Friend Dahmer came out, Joyce Brabner, Harvey Pekar's widow, took me to task. "Stop being such a recluse," she scolded. And that really shook me up! Was I recluse? I guess I was! And since then I've made a concerted effort to reach out to others in the comix community and meet and befriend other creators. And it's been great! I mean, I'm still kind of a social dope, but I realized, with Joyce's reprimand, that I was only hurting myself. But everyone has to make that decision on their own, and if Watterson wants to be left alone, fine, more power to him.

What irks me-- and, again, this is not directed at Watterson at all, so no one jump down my back that I'm bashing him, because it's not him saying these things-- is how his seclusion is somehow a purer state of being for a comix creator and isn't it all so admirable? I just foolishly got into it with a couple  Calvin & Hobbes fans on a comix board on this very topic:

"Yeah, it’s pretty disgusting that he won’t exploit properties he created as marketing tools. And that he won’t give in and just do whatever people tell him too, even a festival as fabulous as this one. Standing by your own principles is a pretty gross concept in this day and age."

Apologies to Comicsbeat for stealing that comment. To which I say: O brother. My own comment, which generated this retort, was what I've expounded on here. Waterson's seclusion is his personal choice, but please don't wave it in my face and tell me I'm a crass capitalist sellout for going to France to pick up my award. And I'm getting tired of hearing from his fans and many in the comix press  and academia about what a saint he is because he's a recluse. He was the in the right place at the right time with the right shit, to quote Joe Strummer, but just because all the hard-working creators are out there doing interviews and tabling at every con and fest and meeting and greeting and tirelessly hawking their work doesn't make them lesser creators. I mean we can all agree that Jim Davis and his Garfield merchandising empire are completely nauseating and the comix equivalent of a McRib sandwich, but that's not what I'm talking about here. And yes, no one need flame me with a "you're not fit to wash Watterson's brushes" rebuttal. This isn't a personal attack on him. Like I wrote, I have no beef with the guy or any evidence that this attitude comes from him at all.

It's funny, because Steve Ditko is cut from the same cloth and the consensus among comix fans and scholars alike is that he's a total  whackjob.

To be honest, I never read Calvin & Hobbes, because I wasn't reading comix, any comix, and certainly not mainstream newspaper comix, at all during that period. I know it was beautifully done and his many fans are convinced it's the single greatest comic strip ever made,  and I admire the guy for hanging it up rather than continuing on as an ever-more-pathetic zombie strip, like All Capp or Milton Caniff or Charles Schultz or just about everyone really. But I don't buy it that this places Watterson above those guys, as his fans often proclaim. It is simply what it is. He chose to end Calvin & Hobbes. Those other guys soldiered on virtually until the end of their lives. What we remember is the greatness of Terry & the Pirates and Peanuts at their peak, not the shaky-line final months.

I've never met Watterson, or heard a peep from him, over the years, nor have I tried to contact him myself, but we live quite close to each other. Watterson has lived in Chagrin Falls, a quaint and wealthy hamlet on the far eastern outskirts of metropolitan Cleveland, for decades. In fact, it was rumored he lived, for a short time a year or two back, right up the street from me in Cleveland Hts., in Harvey Pekar's old neighborhood.... and mine, for that matter! He wrote letters to the local paper (on topics other than comix) and used a Cleveland Hts. address. I pointed this out to several editors when I saw those printed letters. "You know who that is, right?" They didn't. Or that maybe that address was more subterfuge to throw stalkers off the scent, who knows? The local weekly rag famously tried to track him down in Chagrin Falls a few years prior, and then wrote a cover story about how they couldn't locate him but found a guy at the local bookstore who looked a lot like him and when the reporter approached, the manager of the store escorted him out.

Our paths "crossed" in college, too. We were both drawing political cartoons at the same time for our respective school newspapers, me at Ohio State, he at Kenyon College, about 20 minutes up I-71 from Columbus. I kept an eye on him, as I did on all my college rivals with obvious talent, since I figured we'd be competing for the same jobs down the line. But both of us got sacked from our first jobs– Watterson at the Cincinnati Post, me at  the West Palm Beach Evening Times– and we each then left the field, never to return.

Hey, I would have liked to have seen the guy at Angoulême. I thought it was pretty cool that this prestigious European comix fest was giving two rubes from Ohio an award. Apparently, Watterson didn't share that thrill. I'm fucking thankful that I can enjoy moments like that. I'll be at Angoulême again this January and I can't wait!

Posted by Derf Backderf at 9:01 AM