Look What I Got for Christmas! 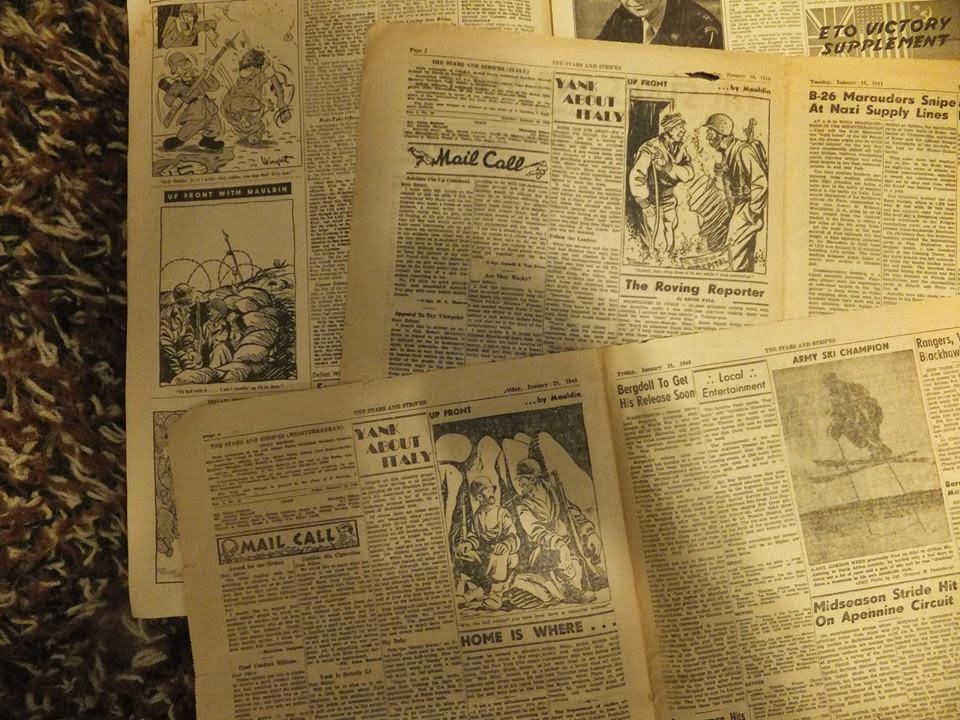 Christmas present to me. Three issues of Stars & Stripes, two from early 1944, and one from 1945, a special "Germany Surrenders" extra. All with Bill Mauldin Willie & Joe cartoons! People who follow my musings know what a huge Mauldin fan I am.

The two from 1944 are Mediterranean Editions, published out of the Italian S&S office in Naples, which served as Mauldin's base, since he was a soldier assigned to the 45th division there. Both issues are just before the Anzio invasion. The landing was a boondoggle and Allied forces were pinned by 100,000 Germans who held the high ground and shelled them continuously for months. There were 44,000 casualties until the Allies finally broke out in May. For Mauldin, though, who commuted back and forth to Anzio from Naples in his famous personal jeep, it provided tons of material. "If you liked ironies," he said, "that beachhead was a cartoonist's goldmine."

Note the crappy printing, using whatever supplies and ink could be scrounged up. Something Mauldin writes about in detail in his autobiography The Brass Ring. It's fun to look at these things, knowing that Mauldin personally babied them through the press run.

The May 8, 1945, extra was printed at the Times of London! It's on thick paper, almost a magazine weight. Obviously meant as a keepsake. Or perhaps the editors were so overjoyed that the Nazis threw in the towel, they just decided to damn the expense. 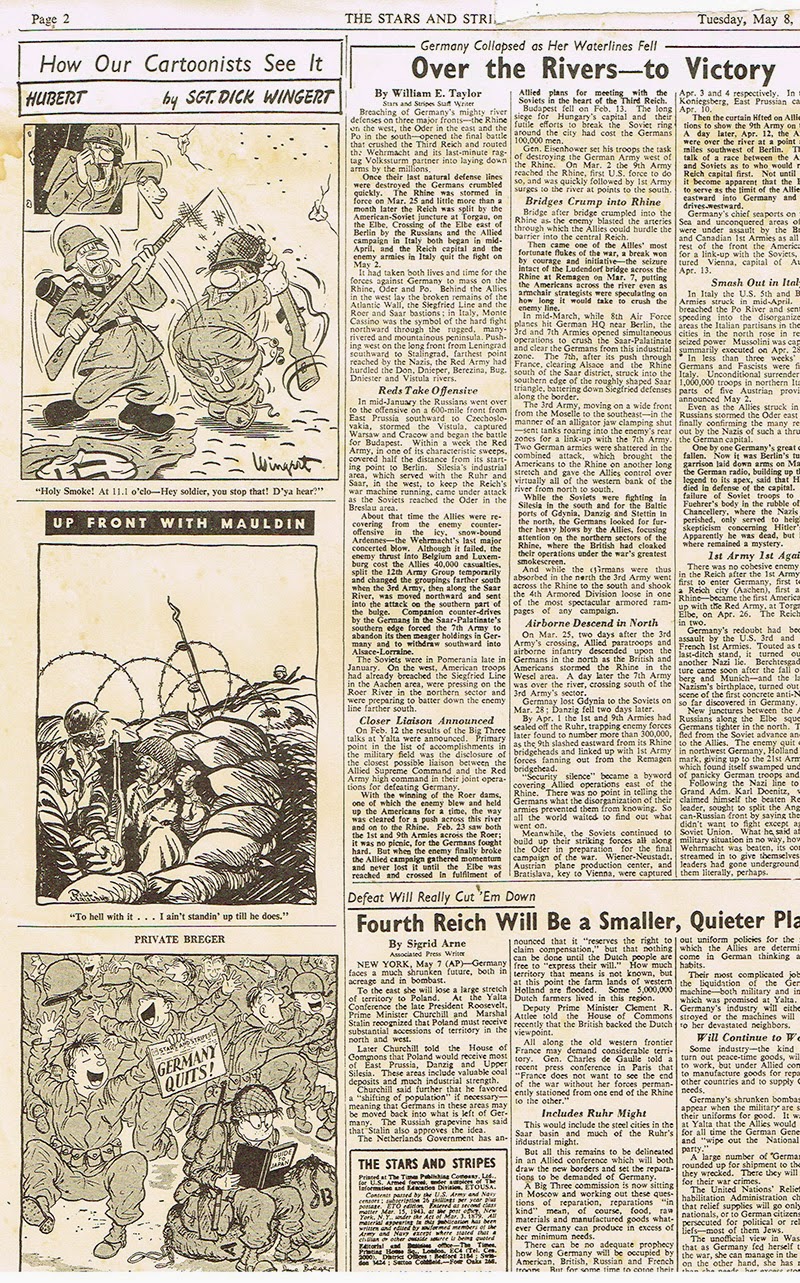 But it's the cartoon that's remarkable. It's on Page 2, as usual, even though Willie & Joe was the most popular feature in the paper.  Usually, the Mauldin cartoon ran by itself, but here the editors, as editors are wont to do, decided to bundle them all together, since they all deal with the German surrender. Dick Wingert's Hubert, on top, was a lame gag panel that, believe it or not, lived on as an even lamer syndicated feature for another 50 years. On the bottom is Private Breger by Dave Breger, another gag panel, best known for coining the phrase "G.I. Joe." It, too, inexplicably lived on as the syndicated Mister Breger until 1970. Both are described as "popular" with the troops, but are today obscure and forgotten. They were pretty obscure as syndicated features, too. 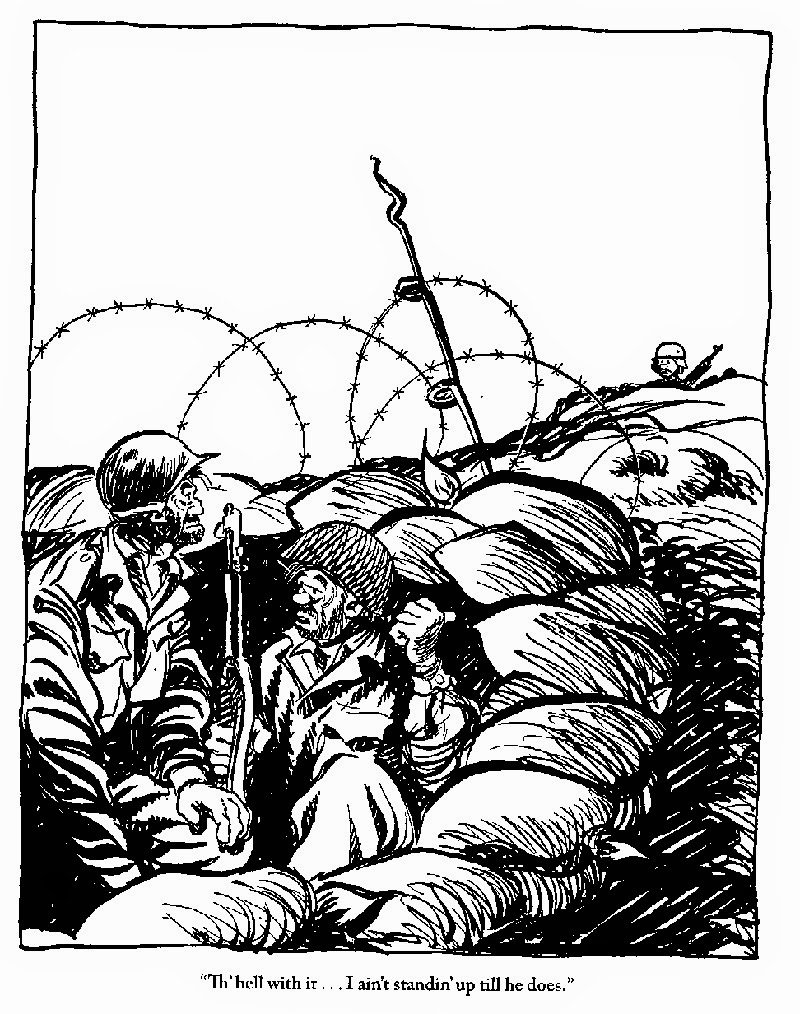 However, I like the contrast with the Mauldin cartoon, scanned here from my Fantagraphics box. Hubert and Breger both offer mild gags that are head-shaking examples of lameness, especially given the scale of the news of Germany's surrender. This is the best Wingert and Breger could come up with? Mauldin, however, gives the G.I. reader a dose of his classic
cynicism. Yeah, sure it's over. Wonderful. You can still get killed, boys. Note also the "Th' hell with it..." Remember, this is the goody-two-shoes Forties, when a "gosh darn it" was considered risqué for newspaper publication. Mauldin had the chutzpah, and the status, to get this expletive by both editors and army censors, on the biggest day of Stars & Stripes' publication history!

The following day, Mauldin opened his copy of Stars & Stripes and was stunned to read he had won the Pulitzer Prize for cartooning.

This May 8 cartoon was also the last great Mauldin wartime cartoon. He spent the remaining two months of his hitch scribbling cartoons about exhausted soldiers waiting to ship home. He grew ever more frustrated with his work and felt he had "lost it" now that the fighting was over. But looking back now, those cartoons reflect the everyday reality of his dogface audience: the big celebration, then months of red tape and boredom. My old man, a sailor on the battleship USS Arkansas, cooled his heels for 8 weeks on the Treasure Island base off San Francisco, because the Navy lost his discharge papers. They also cut off his pay, since he officially didn't exist. That's a Bill Mauldin cartoon right there!

Mauldin returned, classified A1, along with generals and diplomats, and was mustered out in June. Up Front, his first  cartoon collection released by a major stateside publisher, hit the stores a month later. Heavily censored by the Army, which still maintained that power while the war raged on in the Pacific, to remove the most cutting content, it nonetheless immediately shot to the top of the bestseller list. I discovered a copy of this tome at my tiny local library in my hometown when I was 13. This began my lifelong appreciation of Mauldin.

The above cartoon is a great example of why I consider Mauldin the greatest "underground" cartoonist. Not only did he create something completely unique and groundbreaking, cartoons that stretched the limits of the genre, he was also the first cartoon "voice of his generation." But he operated, obviously, under far harsher conditions than Crumb or Groening or any of the others who attained similar status. Not only was he at war, still a mere Sergeant despite his fame, he had to deal with a military bureaucracy that wanted to crush him. This is a guy who got chewed out in person by Gen. Patton and held his ground! Crumb, as much as I admire him, would have been wheeled out of there on a stretcher and probably never published again!

The famous quote: "There'll never be another Bill Mauldin. The Pentagon won't let it happen."