Poor Stan Lee Says No One Cares About Stan Lee.

Stan Lee is mad. Because no one cares about Stan Lee! 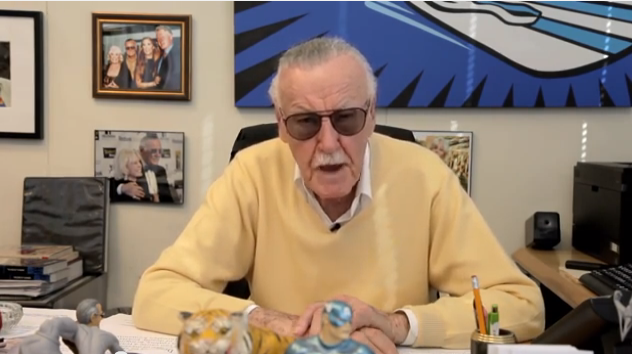 "This burns me up!," rants Smilin' Stan.  "No one ever asks me, 'tell me about yourself.' All they want to know about is my characters!"

It's tongue-in-cheek, of course. But the part there that isn't answers Stan's own question. "Your" characters, you glory-hogging gasbag?

You mean the characters created by Kirby and Ditko that you shamelessly took full credit for? The ones  you lied about creating in a series of autobiographies,  at lecture after lecture, in a billion appearances and interviews you've give over the past 50 years? And if some fanboy is paying $50 at a Wizard World Con to have you scribble your name on his copy of Amazing Spider-man #100, he has to ask about your wife and kids first? Haha, what a great joke! Every time Stan opens his mouth I want to pee on his shoes. Excelsior!

Fans, according to Stan here, only ask about the books. "Hey Stan, in the X-men #52, howcum you wrote this...." he brays, citing a typical question.

Guess what, Stan? You didn't write X-men #52. Arnold Drake did! You just can't help yourself, can you?

Here's his full rant, if you can stand to listen to him:

Not un-coincidentally, here's a letter, undated, that was hand-written and signed by Jack Kirby. This was just posted on the Kirby Museum site, for obvious reasons. The Kirby Family, of course, just scored a major victory in a decades-long battle to get Jack the credit he deserves, credit long denied him by Stan and his followers, and by a succession of corporate overlords who have owned Marvel for the past 40 years.
At long last Kirby will get the credit he deserves. By everyone except Stan, of course, who will croak on and on about "his" characters until he, well, croaks. 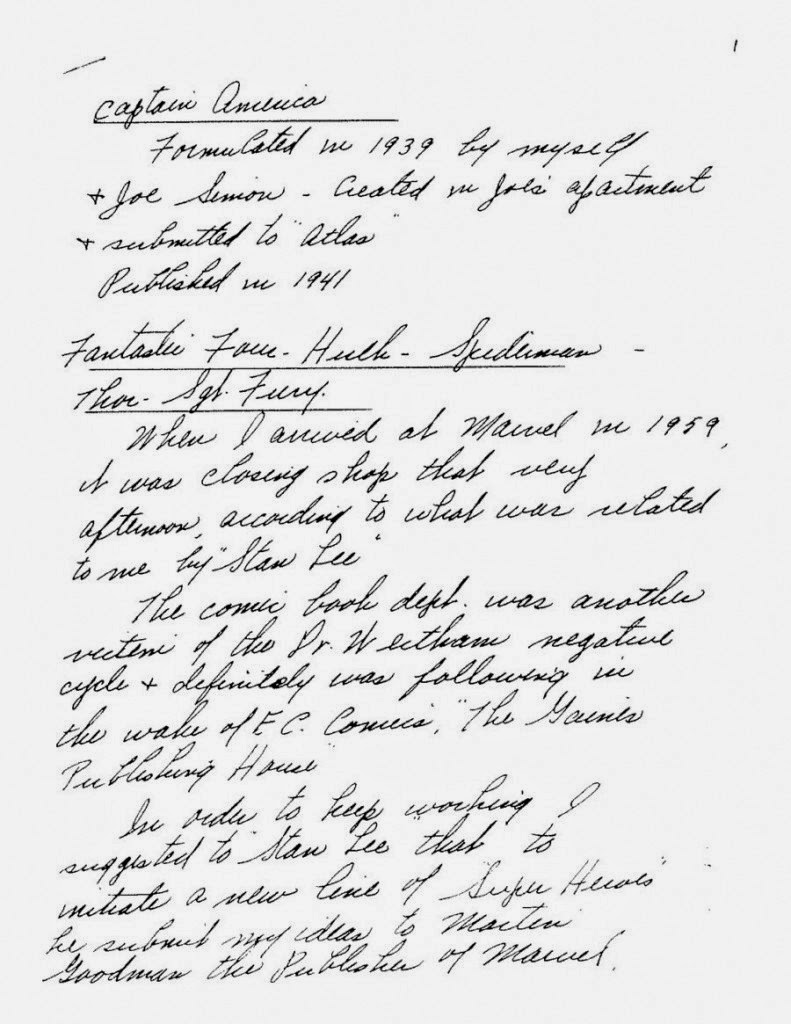 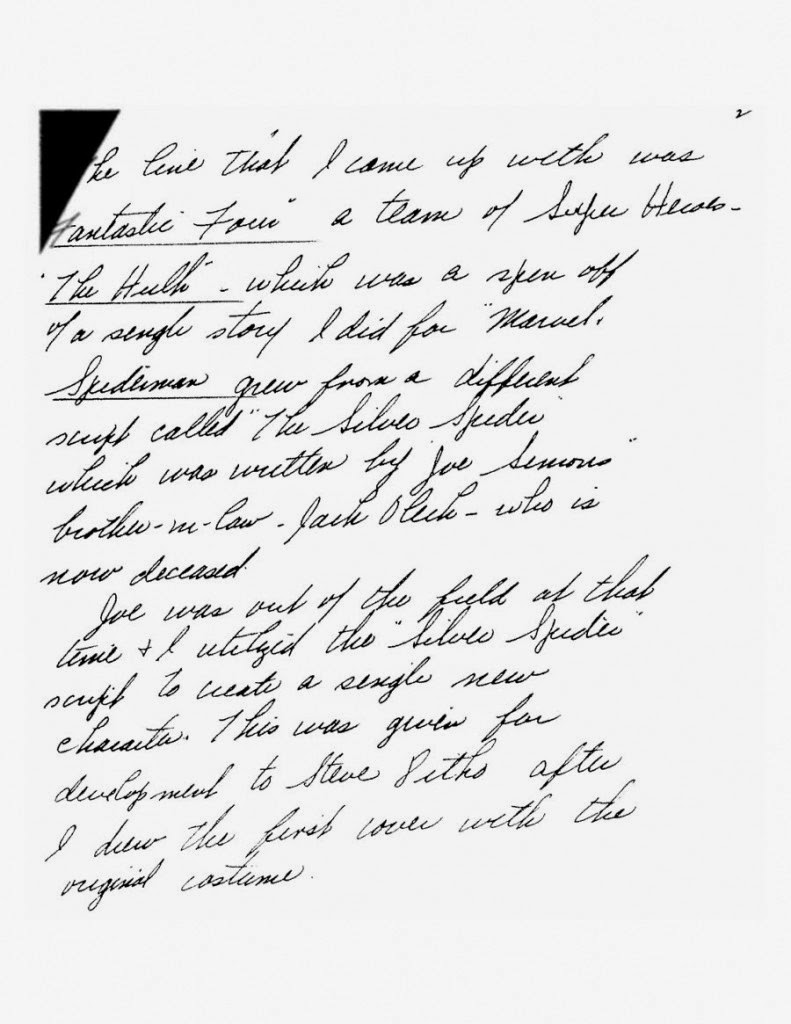 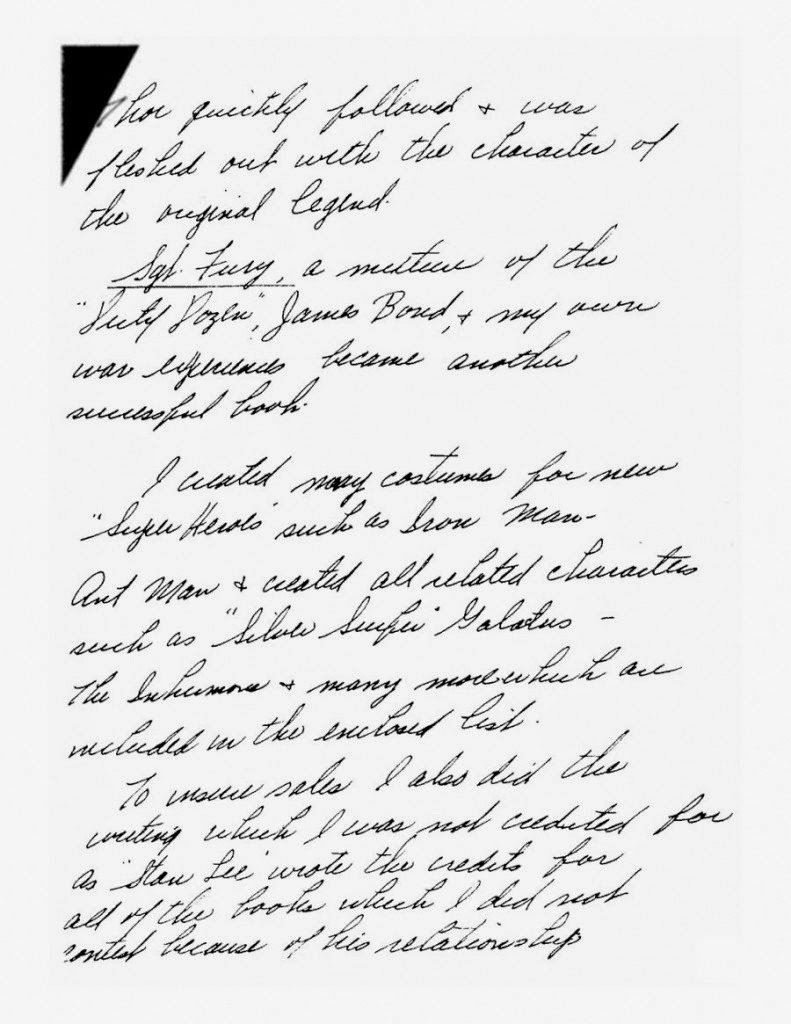 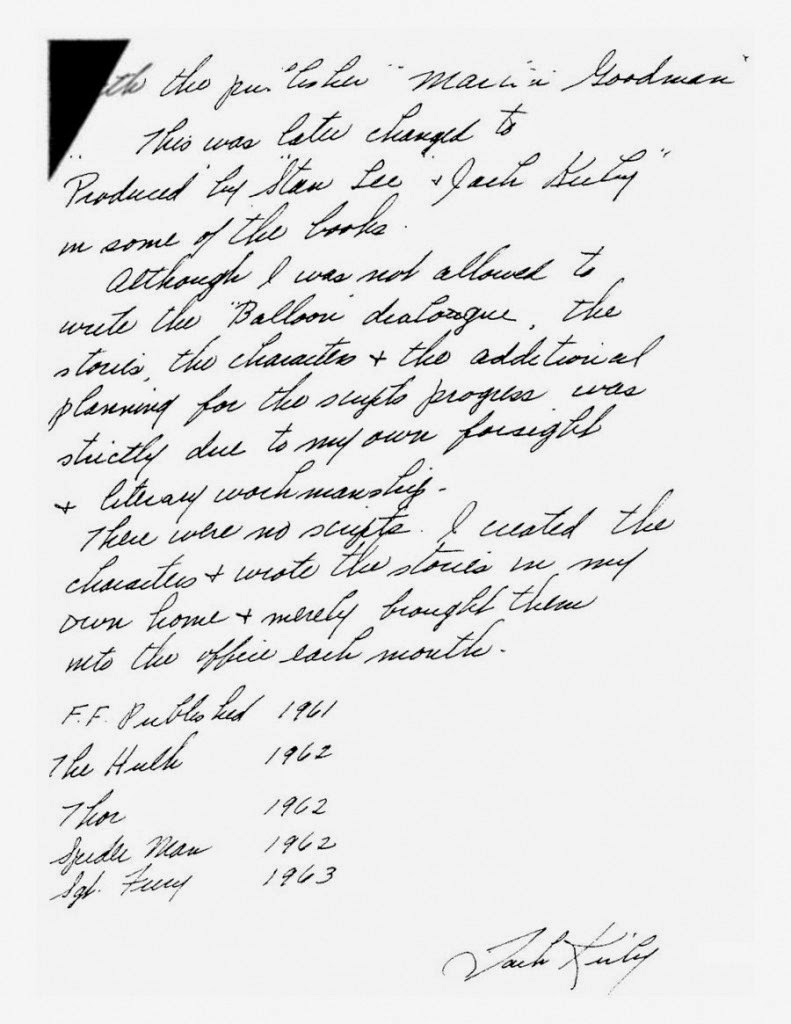 Here's the transcript:
Captain America
Formulated in 1939 by myself + Joe Simon in Joe’s apartment _ submitted to “Atlas”
Fantastic Four – Hulk – Spiderman – Thor – Sgt. Fury
When I arrived at Marvel in 1959, it was closing shop that very afternoon, according to what was related to me by “Stan Lee”.
The comic book dept. was another victim of the Dr. Wertham negative cycle + definitely was following in the wake of EC Comics, “The Gaines Publishing House”.
In order to keep working I suggested to Stan Lee that to initiate a new line of Super Heroes, he submit my ideas to Martin Goodman the publisher of Marvel.
The line that I came up with was
“Fantastic Four” a team of Super Heroes
“The Hulk” – which was a spin off of a single story I did for Marvel
“Spiderman” grew from a different script called “The Silver Spider” which was written by Joe Simon’s brother-in-law, Jack Oleck, who is now deceased.
Joe was out of the field at that time + I utilized the “Silver Spider” script to create a single new character. This was given for development to Steve Ditko after I drew the first cover with the original costume.
Thor quickly followed + was fleshed out with the character of the original legend.
Sgt. Fury a mixture of the “Dirty Dozen”, James Bond + my own war experiences became another successful book.
I created many costumes for new “Super Heroes” such as Iron Man, Ant Man + created all related characters such as “Silver Surfer” Galactus – The Inhumans + many more which are included in the enclosed list.
To insure sales, I also did the writing which I not credited for as Stan Lee wrote the credits for all of the books which I did not control because of his relationship with the publisher Martin Goodman.
This was later changed to “Produced by Stan Lee & Jack Kirby” in some of the books.
There were no scripts. I created the characters + wrote the stories in my own home + merely brought them into the office each month.
FF published 1961
– Jack Kirby
Posted by Derf Backderf at 8:35 PM