Jaw drop.
Punk Rock and Trailer Parks gets a HUGE shoutout in the French national newspaper Le Monde today, in the frontpage story on the first return, since the terrorist attacks, of The Eagles of Death Metal, who played last night.
"On the stairs, past the bar, J., headphones on ears, is immersed in a graphic novel, Derf Backderf's Punk Rock & Trailer Parks (Çá et Lá, 2014). She is 26 years old. "
Yeah, here in France, people take comix to concerts to pass the time! Like everyone else here, I heard about this concert and thought about what an emotional affair it would be, and admired the defiance of the Parisians. I never expected PR&TP to be connected to this triumphant event! (Actually, I feel a twinge of the guilt of the unworthy there).

PR&TP is a hit book here, which it was not in the US. In fact, it turns out, it never really left the warehouse in the States! My publisher in 2010, SLG, ran face first into the financial and distribution troubles that would spell its end, just as the book was released. SLG, of course, a pioneer of indy comics, was the largest victim of the corporate conspiracy of the Big Two and Diamond Distribution, which essentially barred smaller publishers from mainstream comic shops. This unfolded just as PR&TP came out. I spent over two years making that book and no one could find it. It was very frustrating. I busted my ass and sold as many copies as I could at various cons. I sold tons of them and couldn't understand why it wasn't selling in the shops. Turns out the shops couldn't get copies, that's why, thsnks to SLG's troubles. And then a roof leak at the warehouse destroyed most of the copies.
But I was very happy with it, and it got great reviews. PR&TP did what wanted: put me on the graphic novel map and, more importantly, I taught me how to make a book. There would have been no My Friend Dahmer without PR&TP. It's the book I needed to do first.

PR&TP, for those of you who haven't read it, is still available. You can grab a copy on Amazon, which SLG re-supplies, or the digital download on Comixlogy.

As my wife told me before I left, "You're leading a charmed life."
Posted by Derf Backderf at 4:10 PM

Greetings from the road.

A few random thoughts  from the road.

I’m halfway into my 5-week tour of France and Belgium. I’m writing this from a Brussels hotel. A cold, driving rain is, unfortunately, keeping me from enjoying the city today, before I hop a train back to Paris this afternoon. This is my 12th trip to France since Mon Ami Dahmer was released here in 2014. As my wife says, I'm living a charmed life.

To sum up so far, I appeared at my third (straight) Angoulême Comics Festival and am now skipping all over the country for signings and interviews. Angoulême was exhausting, frankly. I signed at my publisher's booth for six or seven hours a day, four days in a row. It's great meeting fans, don't get me wrong, and I had a big line right up to the closing bell. The tradition here is a dedicace, a drawing on the title page of every book. It's great for the fans, but that's a LOT of drawing. I didn't even try to keep count.

The many screw ups of the Angoulême Fest bureaucrats made it something of a bummer affair. Maybe because I started on such a high note, winning a prize for My Friend Dahmer at my first Angoulême, but they get a little worse every year. Last year it was mere weeks after the Charlie Hebdo massacre and this year, well... a round-up of the disastrous awards ceremony, where a French shockjock handed out fake awards to humiliated comix creators and then mocked and insulted them is HERE. I've commented on this at length on social media. Suffice it to say I've never seen such a nauseating, cruel trick pulled on creators. French comix folk are FURIOUS, horrified and ashamed. I wasn't even involved in the ceremony and people have been apologizing to me at every stop!

• Every French comics shop has at least three people working in it, no matter how small. And they all appear to get along splendidly. They are happy places. So are the surviving US shops, although we all well remember the creepy stores run by swindling assholes. The difference is the French shops are thriving. There is no Amazon here. France outlaws book discounts greater than 20%, a move made to cut off Amazon at the gate, prevent its  infamous predatory capitalism and protect French bookstores. As a result, Paris alone has over 400 independent bookstores, and almost 100 comic book shops! Socialism works!

• Yesterday evening was laundry night. O, the glamorous life of a traveling author! There’s a 24/7 laundromat conveniently located right across the street from my Paris hotel. Right in the middle of the spin cycle, a fuse blew and the laundromat went dead and dark. I was left with an armload of dripping clothes at midnight, and with a morning train to Brussels. Thank God for a friendly hotel clerk and their industrial clothes dryer!

• The Paris Metro cops have checkpoints in station all over the city. Don’t have a ticket? Fifty euro fine on the spot. They even have credit card devices to process the fine right there. It’s a total money grab, and it’s a mob scene of stern-faced cops and angry, yelling passengers. I always keep my ticket in my back pocket and just wave it at them. They look disappointed as I march on.

• French trains knock me out, especially the fast intercity ones. I don’t know if it’s the rocking motion or the weak train coffee, but I sleep like the dead. Great way to catch up on snooze time.

• The Metro station I was in this morning smelled like baking bread, thanks to the bakery in the lobby. A slight improvement over the smell of stale pee one enjoys at a Cleveland train stop.

• At Angoulême my publisher, Editions Çá et Lá, brings in a dozen creators from all over the world. A highlight of these trips is hanging out with old friends and making new ones. The week after the fest, we all spend in Paris doing signings and interviews. We stay in the same hotel, share meals and hang out at a legendary comics shop across the street, or at a nice corner cafe next door. All of my colleagues have gone home now. It’s sad bidding them farewell.

• On the plus side, it looks like I dodged the Angoulême Plague that felled many of my fellow scribblers. Angoulême was packed and the sound of hacking and coughing filled the air, along with germs. Add to that, the custom of cheek kissing and bugs spread like wildfire here. You can easily understand how the Black Death wiped out half the country.

• I’ve met a few French garbagemen who want signed copies of Trashed. One told me he coaxed everyone on his crew to read it, too and some of them “have never read a book in their life.” One garbageman used to work at the comics shop in Toulone, on France's southern coast! He left “to make more money.” I, of course, left the garbage biz for the same reason (among others, as readers of Trashed know), so we passed going in opposite comix-garbage directions!

• Every shop owner wants to give me a free book as a token of appreciation. I don’t get squat at US signings, so that’s great, except with 20-some signings, my bag will weigh as much as a Buick.


• Dining out here is a national tradition, and dinners last HOURS. A round of drinks, followed by three (or sometimes four) courses, then coffee and perhaps ANOTHER round of drinks. Everything is fabulous, of course, and my various hosts take great care in picking their favorite local eateries, places no tourist would find. The French are all clean platers, too, right down to wiping up every ounce of sauce with bread. I seldom finish, which gets me disappointed looks. I don’t know how they do it! They’re all pretty trim, too. The benefit of good ingredients and great cooking, I guess.

• Comic creators are treated like visiting rock stars here. Everyone is SO glad to see you, and there’s a superfan or two at every signing. One woman practically burst into tears when I handed her my finished dedicace! It’s great fun. I have no explanation why my books have resonated here, while other (far better) American books have not. My publisher, Serge, will chalk that up to the brilliance of the publisher. I won’t dispute that. I lucked out landing at Çà et Là.  And I just found out I’ll be back in Sept. for a big book festival, plus possible additional trips to Amsterdam and Denmark. It’s all completely unexpected. I walk around Paris smiling to myself. I simply can’t believe this has happened to me, especially after 20 years toiling in weekly newspapers. I enjoyed my time in that genre, don’t get me wrong, but lavish... or even unlavish... benefits of any kind were unthinkable. Once in awhile a weekly editor would buy me a beer, that's about it. Half the time I got stuck with the tab!

More from the road on the next rainy day.

Posted by Derf Backderf at 4:00 AM 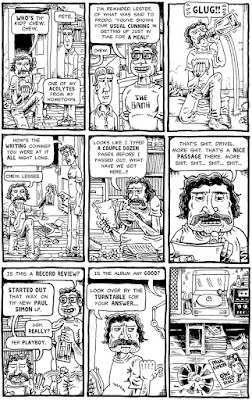 Posted by Derf Backderf at 3:02 AM