It's cold and we're all gonna DIE!

Local schools canceled. Sun is shining. No snow. The whole damn eastern half of the country shut down by TVnews Dual-Doppler Douchebags who have sent everyone into a panic with predictions of a wintery doom. You're all worthless and weak. Now drop and give me 20!

Here's a photo from my senior year at Dahmer High in 1978 as we trudged off the bus in a fucking blizzard to attend class. 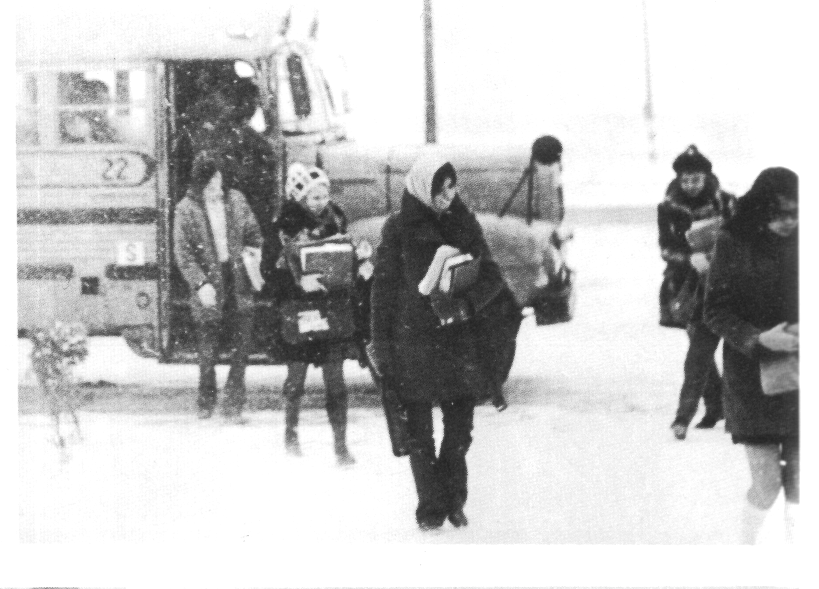 For us Cleves (those old enough to remember, that is) all winters are judged by the Winter of 1978. And all pale in comparison. Mainly thanks the the Great Blizzard aka The Cleveland Superbomb.

This was long before all this dual-doppler nonsense, so the entire region was caught flat-footed. These days, the tv weather dorks freak out at every system that moves in, even though the result is typically a dusting of snow so said weather dorks look like idiots the next day, having predicted a snowy apocalypse. But in 1978 it was the opposite, and the blizzard slammed into Cleveland like a surprise attack from Alberta. A massive low pressure system, along with a record-setting barometer plunge, stalled over Lake Erie. It was basically a white hurricane  that just kept rotating over the Lake, recharging itself with snow as it did so, so it was Lake Effect after Lake Effect, a non-stop snow machine that went on for days. Along with 60 mph winds that blew people off their feet and deadly wind-chill. We had 10-foot-high drifts on our street!

Thousands were trapped downtown. The highways were parking lots of stranded cars. Only those who fled early when they suspected this was the big one, escaped. We were at school and were dismissed into a whiteout! 5,000 National Guard troops were dispatched to rescue people, since cops and fireman were stranded, too. Seventies cars were shit in the snow. Those big, rear-drive gashogs could only skid and slide and spin their wheels, even with snow tires and chains. That's right, we put chains on our tires. Only the Guard's massive combat vehicles could move through the streets.

The Old Man actually planned to go to work the next day (oh, that Depression-era protestant work ethic!) so my brother and I were booted out the door at 6 am to shovel out the 50-yard-long driveway. We got nowhere. We'd come in to warm up, because it was bitterly cold, and the Old Man would glare at us like we were slackers. That's ALL the farther you two have gotten? Eventually he came out to supervise and crack the whip. Only then did he realize what carnage had dropped from the clouds when he saw the huge drift we had run into halfway out. We had shoveled a tunnel through the drift that we could walk through. We were both 6-foot! The Old Man waded farther out to the street, saw the massive, unplowed drifts that stretched as far as the eye could see, waded back and grumbled for us to "forget it."

We missed a week of school. Every snow day we had. Trapped in my house with my parents and squirrelly little brother. We were sent outside periodically to keep clearing the driveway, which took days. Also had to shovel a path to the dog run, and a small area for the dog to take a shit. I was bored stiff. This was before cable TV or even VCRs. We had six tv channels that showed nothing but housewife fare like One Life to Live or Mike Douglas or Match Game 78. I Locked myself in my room behind a pile of comix. Finally a National Guard bulldozer cleared our street. And there were a couple MORE blizzards after that one! On the plus side, the Old Man sprung for a plowing service for the first time.

Six days after the blizzard, a semi trailer was discovered on I-271, south of my hometown, completely buried in a massive drift. The truck had stalled in the blizzard and was swallowed whole! The driver was still inside!! He survived on an electric cab heater and pop and candy. There's the truck above, half freed. Look at that drift. It must be 20 feet deep!