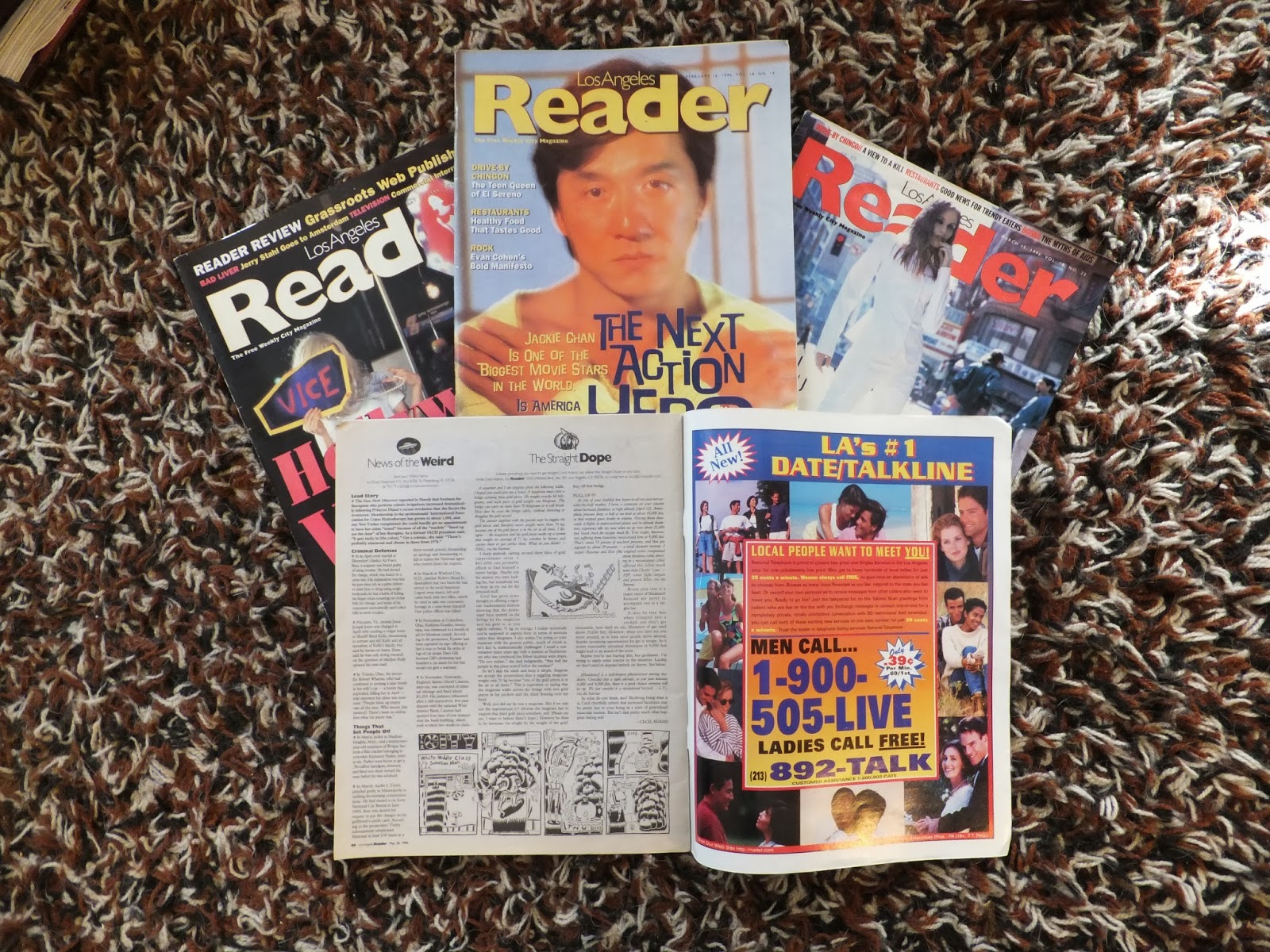 My latest acquisition.  Copies of the Los Angeles Reader from 1996! Attractively arranged on the shag rug in my studio, that I salvaged from my teenage room when my mother (at last) redecorated it.

That's two down and one to go. Scored a box of Chicago Readers last Fall. Still looking for a complete copy of the NY Press. I've been on a mission to pump up my archive, so I've been seeking out copies of some of my favorite weeklies, all containing my strip, of course. I used to get 20 papers mailed to me every week (I had to tip my mailman like crazy) but I'd just tear out the page with my cartoon and toss the rest. But these issues are such wonderful artifacts of the era, that I regretted not saving some. Thus my quest. It's proven harder than expected. Who, after all, saves a 20-year-old free weekly?

The LA Reader was founded in 1978 by the owners of the Chicago Reader. But unlike the corporate media chains that have totally taken over what's left of the weekly genre, the Chicago hippie owners provided guidance and inspiration, but let the staff of The LA Reader operate independently. All the Reader papers were wonderful, with terrific writing, amazing photography and… best of all… cartoons! These 1996 issues are near the end. The biggest one is a mere 60 pages. But they ran SIX cartoons!


The LA Reader was the first home base of Matt Groening's Life in Hell, after it began as a self-published comic book and had a brief stint in an LA zine. He was also an asst. editor and music critic at the paper. The LA Reader also launched filmmaker David Lynch's Angriest Dog in the World, quite possibly the worst weekly strip ever produced. Love his films. Hated his strip. It featured the exact same drawing every week. The editor once told me he ran it more as a joke than anything. He mused that Lynch was almost daring them to drop it with each ever-more-lame strip. "Take him up on that dare," I advised. The joke was mostly on all the struggling real cartoonists out there who would have killed to be in an LA paper. The LA Reader picked up The City in 1992, and ran it until the paper was closed. 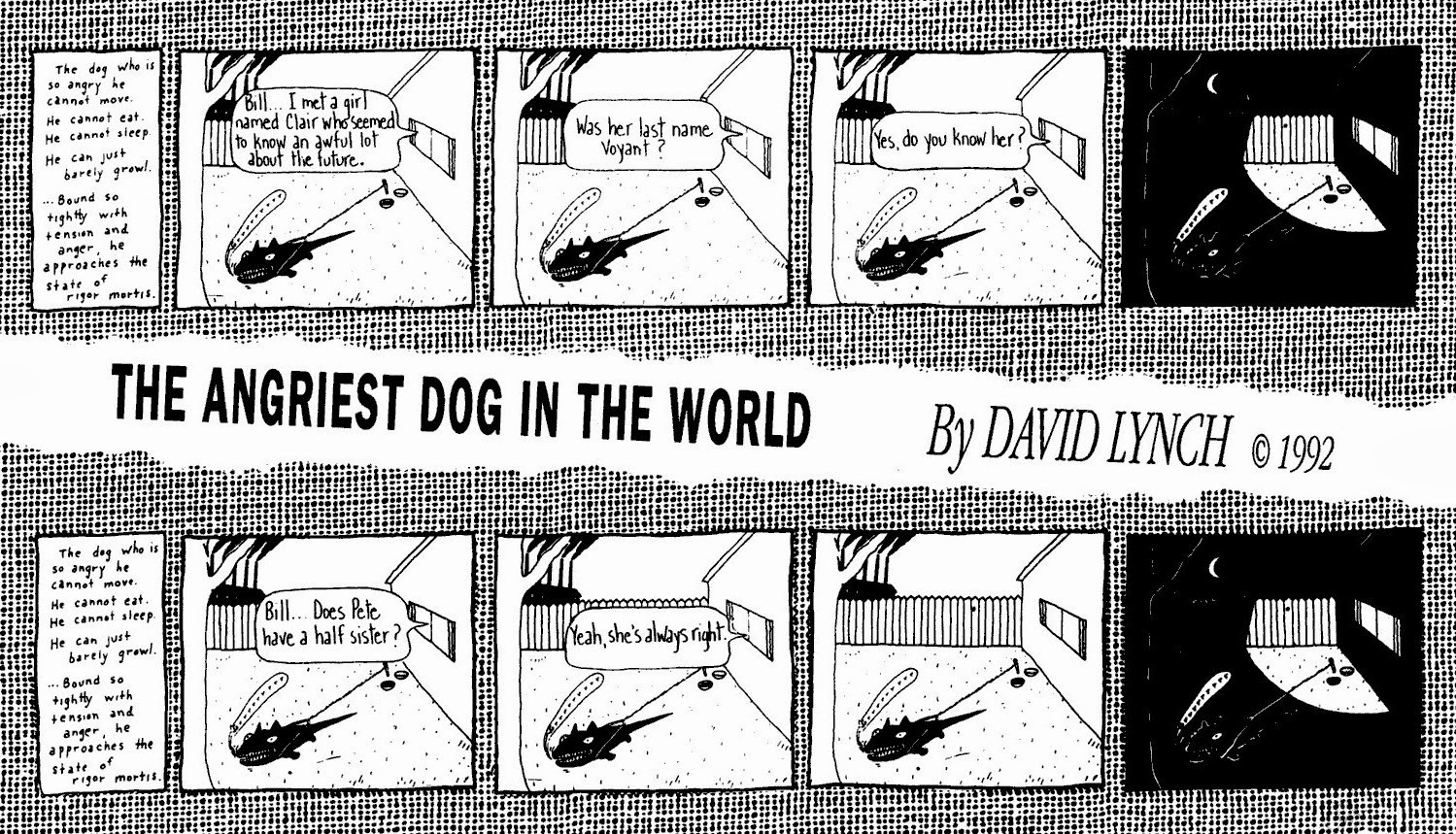 It's a sad tale. The dominant LA paper was the LA Weekly, which was a slick publication that was part of the Village Voice chain, which was, at that time, owned by dog food billionaire Leonard Stern. It was a fine paper, flush with cash. I guess in LA you call a billionaire's newspaper "alternative." The big rival of the Village Voice chain was the New Times chain of Phoenix, which owned a dozen or so papers and was known in the industry as The Evil Empire for it's cut-throat tactics. Without warning in 1998, New Times swooped in and bought The LA Reader, fired everyone, about 35 staffers and another 30 freelance contributors by my count of the masthead, and closed the paper.  In it's place, New Times started their own publication, The LA New Times. It was a decent paper, one that also ran my strip, but the forced demise of The LA Reader was a total waste. I'm not even sure why they bought it. I guess just to eliminate a competitor. The LA New Times only lasted six years before closing.

The last check I received from The LA Reader was huge, many times what I was owed! I called the editor up, because I didn't feel right just waltzing off with payment I wasn't owed. It was his last week on the job and he was pretty much alone in an empty office that was soon to be vacated. He laughed at my confession. Turns out New Times had given him a big wad to pay off all the freelancers and settle the paper's accounts. It was way more than needed, so  the editor just divvied it up among  his loyal freelancers rather than return money to New Times. "Screw the fuckers," he told me. It was the only time in the history of my newspaper career that I was given extra money. The norm was that papers screwed me.

I'm still looking for a couple copies of the NY Press. If anyone has some, I'll trade an original City strip of your choosing! Email me here.

Posted by Derf Backderf at 2:27 PM