My one-man crusade against slabbing 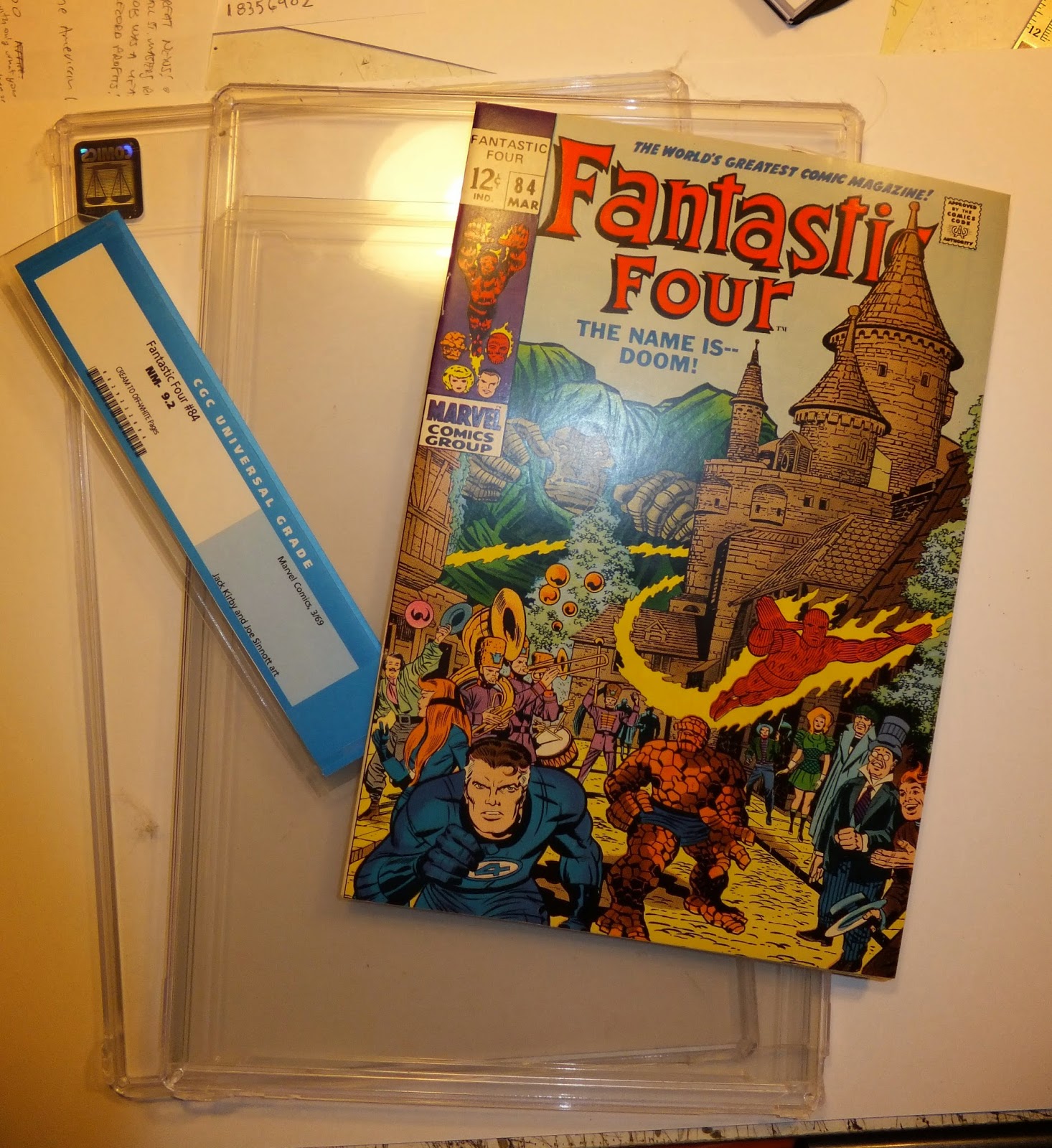 As a comix creator, I consider it my moral duty to buy CGC books and then free them from their plastic coffins.


CGC (Certified Guaranty Company) was created in 2000. It describes itself as an "impartial third-party" that examines comic books, assigns them a numeric grade and then seals them in a hard plastic case. It's known as "slabbing" to comics fans. It's considered essential by collectors of "investment comics," those rare or key books you see auctioned off for six (or even seven) figures. CGC gives such books a universally recognized grade, ensures there's no funny business, like unreported restoration, and then seals them up nice and secure in a protective case. CGC books tend to fetch much higher prices than "raw" books.

CGC came about because big dealers found themselves suddenly atop a collectors market that was plummeting downward. All hobbies are fucked up, of course, but the comic book hobby more than most. When the Overstreet Guide first came out, virtually all collectors thought it was a joke. It was a great reference book, but the prices were crazy, well above the going rate at cons. Within a decade, however, the Overstreet price became the price of books. Dealers used it as an excuse to jack up prices, and keep jacking up prices. Every year, a new Overstreet came out to great anticipation, and every dealer marked up his collectible books 5 percent above, or below, the new Guide price.

The inherent flaw in the Guide price was that it was determined by taking a broad poll of big dealers nationwide, sort of a market survey, and then averaging out their reports. In other words, those with a vested interest in seeing prices go up were the very ones determining whether prices went up. In the Eighties, prices of comic books skyrocketed. Rarer books became unaffordable to the average collector. Sometimes these books weren't even rare, just desirable. 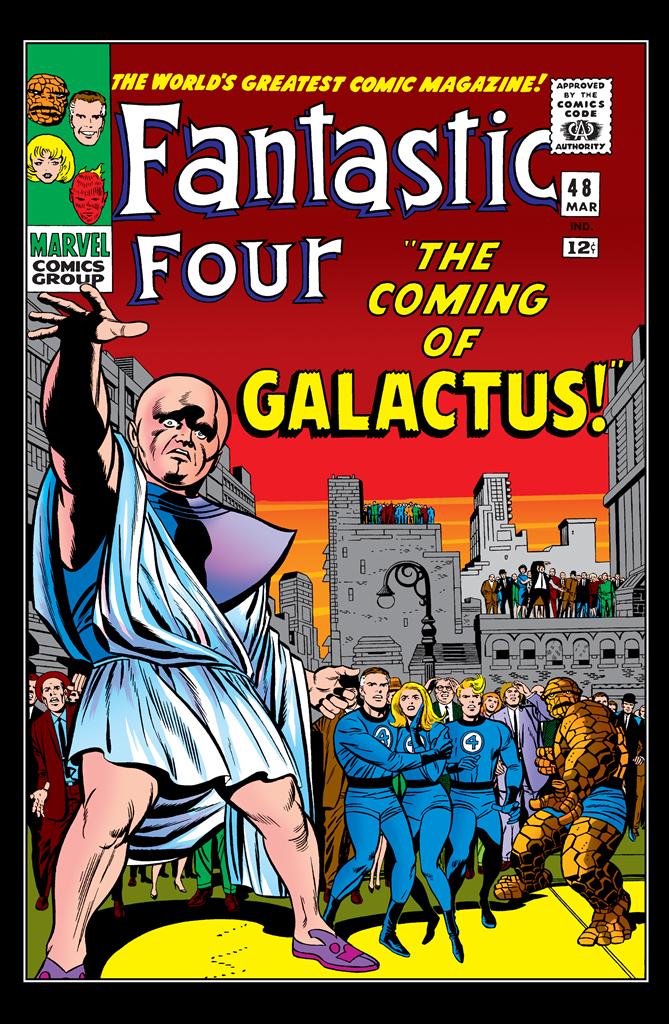 My favorite example of this craziness is Fantastic Four #48, the first appearance of Galactus and the Silver Surfer. A classic book. A great book. But a rare book? Nope. There were probably 400,000 of these printed. Many many copies survive, and many in high grade. But despite its lack of scarcity, a NM copy will have a $1,000 price tag on it! FF #47, also a great book and virtually identical in availability, fetches a fraction of that. I bought a NM copy of #48 in 1978 for $15. I sold it in the late Eighties, during my first big sell off, for many times that. I'll never own a copy again. I have a complete run of FFs from #40 through #102, the peak of the Kirby era, but I've filled in #48 with a later Marvel's Greatest Comics reprint from the Seventies.

And then came the intertube, and it all changed. Just like that, the supply and demand formula was flipped on its head. It was now collectors who controlled the supply. We didn't need to buy from, or sell to, dealers. We could sell to each other on Ebay! Prices went through the floor. Dealers freaked out as suddenly their stock lost half its value. Sure, it was a completely fabricated value, but THEY didn't see it that way! 1995-2000 was an amazing time as a collector. I re-built my collection. Yeah, Ebay was a rough and tumble place then. Once you learned a few precautions, you didn't get ripped off much, and the bargains were worth the risk.

Then CGC was created. This was a way for dealers to cater to the "investor." Who are these people? Dunno. Yuppies, douchebags, whoever. People who only collect a number. They collect just to possess, not to enjoy the book itself. Obviously so, since they'll never read the damn thing! CGC books are, to them, no different than pork belly stocks. They chart the rising or falling market, and sell when they can maximize their investment. It's sickening really.

Who's behind CGC? Hard to say, really. It's a very secretive organization. You have to be a "member" to submit a book for slabbing, either a dealer yourself, or pay a $40 annual membership fee to be part of the CGC Collectors Society. Then you pay $25 and up to have each book graded and slabbed! There's little info on the CGC site about the organization, and not much to be found elsewhere. One of the five original CGC founders was uber-dealer Jerry Weist, now deceased, who convinced Sotheby's to hold its first rare comic book auction. It's a fair guess the other four were similar big time dealers.

CGC also refuses to explain its 25-point scale for grading. The general consensus is that it is more stringent than traditional Overstreet grading. I don't buy that, although there are certainly plenty of people selling books on Ebay who haven't a clue how to grade comics. If I can look at a nice big scan, I can usually ascertain the grade myself.

Full disclosure: I unwittingly stumbled into the first CGC feeding frenzy. When I first stopped buying comics in 1980, after a decade of clearing the spinner rack every week, I had over 15,000 books. From 1976 on, these were NM books. I'd read them once, maybe twice, popped them in a bag and filed them in a long box. They weren't very good books in the late Bronze Age. I read them, I dunno, out of force of habit I suppose, and in the hope the occasional book would trigger the same thrill that comics did when I first started reading them. That's something that became rarer and rarer. But to give up comic books, that would have created a huge hole that I frankly didn't know how to fill. From 1978 on, I began winnowing down my weekly purchases, until by 1980 I was down to maybe three titles a month. Then I started making comics…. and dating girls (these things are not unrelated) and I just said screw it and stopped visiting the comic book shop. I didn't buy a another comic book for 15 years!  These long boxes eventually wandered down to my parents' basement, where they stayed, cool and dry, for two decades. Finally, I agreed to get rid of them and silence my mother's complaints about all those comic books hogging up space in her basement. When I pulled them out, most were hermetically sealed in the bags– the air had been squeezed out. These books were drop dead newsstand mint. Even so, they had little value. They weren't rare. Guide price for most were a couple bucks, tops.

But when I posted them on Ebay in late 2000 and early 2001, I was stunned by the prices they fetched. A copy of, say, Spider-man #160, with a Guide value of maybe $3 in NM, sold for over $30! Over and over this happened. What was going on here? Turns out it was CGC fanatics, who were sending in raw books by the truckload in the early days of CGC in the hope of getting a 9.8 grade! It was all about that little number. Didn't matter to them that it was a worthless, late Bronze Age, piece-of-crap book that no one really wanted. CGC, in a deliciously cruel twist, generated a big windfall for me, which in turn, allowed me to buy a lot of raw books that I regretted selling in the Eighties and wanted to re-acquire. So I could read them again. Fitting, huh?

Here's another curious twist. I won the FF #84 at the top for $15 on Ebay! I never pay Guide, of course. Hell, my only copy of Overstreet is 18 years old. I keep it as a reference only. But the 1987 Guide value of this books is $32. I'm guessing it's $60 at least now. But, you see, slab collectors aren't looking for "mere" 9.2 books. They consider this a low grade! They want a 9.6 or 9.8. So a book like this can fall between the cracks. CGC collectors don't want it. Raw comics collectors never troll CGC auctions. Bingo. A great book for a cheap price!

So what's my beef with CGC?


Simple. Seal a comic book in plastic and it can never be read again! You can look at the front and back cover. Big thrill there. For someone who has devoted his life to making comics, and who takes several years to painstakingly craft each one…. to be FUCKING READ!…. this is an abomination. For baseball cards, fine. because you can still read everything on the card. With a comic book, 90 percent of the contents are lost forever!  Most of these "collectors" wouldn't know the difference between Wally Wood and Wally Walrus. They're just collecting a number. It's an affront to everything I hold dear.

It sickens me when I go to New York City Comicon and see a dealer with a wall of slabbed books. I want to attack the display with a hammer.

I'm guessing that wouldn't be a good idea.

Posted by Derf Backderf at 2:19 PM