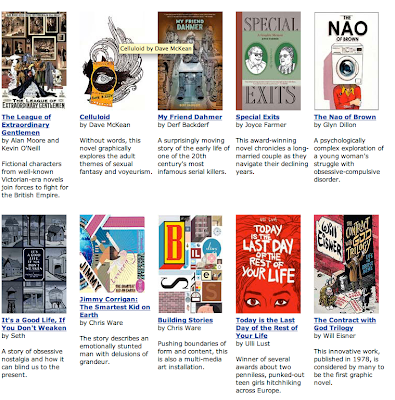 Abebooks released its list of 50 essential graphic novels and I'm on it!

It's a great list. A few glaring omissions. The author doesn't come out and state it, but obviously ongoing comic book series that are later collected in a tome got the short end of the stick here, so Jeff Smith's Bone and Peter Bagge's Hate and Neil Gaiman's Sandman are absent. It's a list of 50 stand-alone graphic novels, not a list of the 50 greatest comix works. It's a fine line, since books like Watchmen and Ghost World also appeared first in serialized form, although limited to a defined run from the get-go, not open ended like, say, Hate. So these are considered a single work. Don't know how you then explain Jimmy Corrigan, which was a weekly newspaper feature that ran for years. I'd also say a collection of Little Nemo or Krazy Kat, even if it was serialized with no defined beginning or end, is better as both art and as a story than just about anything here. Same with Tin-tin. Like all such lists, it's open for heated debate.

It's also heavily weighted to the last 25 years. That's ok, since graphic novels only really emerged en masse starting in the Seventies. That's not say the "wordless picture books" of the early 20th century weren't groundbreaking, and someone like Frans Masereel is a personal favorite, and his art is AMAZING, but truth be told, none of these books, in terms of sheer story and complexity and emotional power, can hold a candle to modern works.  We're in a golden age of graphic novels right now. Enjoy it!

Glad to see Peter Kuper here. He's a fellow Clevelander. I fact he and I, unbeknownst to either of us, elbowed each other at local cons when we were teenage comix dorks! Small world, no?

Joe Sacco is the biggest omission to me. How can Safe Area Goradze not be on this list? Manga also gets totally overlooked. I'm not a great fan of the form, but there are a few masterpieces that are universally lauded, like Barefoot Gen. And no Moebius? No, I don't think so.

Frank Miller is noticeably omitted, too. Just a few years ago Dark Knight Returns and 300 were at the top of every graphic novel list. I still think Dark Knight Returns is a masterpiece, even if it's difficult to block out the next 30 years of DC shamelessly regurgitating the book in ever-more tiresome ways. It's hard not to regard it as a hack corporate reboot, but it was anything but when it came out in 1985. That's certainly not Frank's fault that DC ruined it. I never though much of 300. It's crap history, a neocon wet dream, and more than a little homophobic and racist. Miller's subsequent works have given full flower to those leanings, especially the loathsome Holy Terror, widely regarded as the worst comic ever created. He's become the Ted Nugent of comix. Has any creator, outside of that glory-hogging gasbag Stan Lee, suffered a greater decline in rep than this guy? Too bad, since I'm still a huge fan of his Daredevil, and always will be.

Obviously the compiler(s) of this list have no use for superheroes. That's more than fine with me! The way that lowbrow and tired genre dominates comix in this country is maddening. I would have included a couple stellar works, like Kingdom Come and DKR, but I have no problem ignoring the long-underwear stuff. It gets more than enough press.

In any case, this list is a great place to start for fans new to graphic novels.