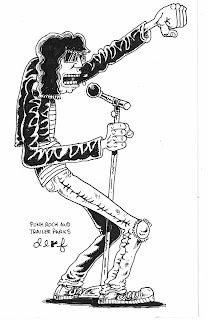 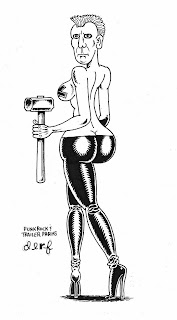 This Sunday, I'll be at The Genghis Con indy comix fest in Cleveland. For you locals, it's at the Beachland Ballroom from 2 to 7 pm. THis show is in its 5th year and I've been part of it since the beginning. We're hoping to build more of a cohesive, vibrant comix scene here in Cleveland, home of Siegel & Shuster, Havery Pekar, Brian Michael Bends, Bill Watterson, Brian Azzarello and many other A-list creators. 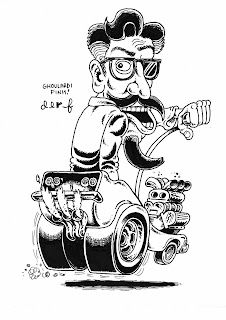 To that end, and as an enticement to pull in folks to the con, I'm offering a series of original drawings, all done of the back of comic book backer boards, for the ridiculous price of $30 each! That's right, original Derfs for $30! These are one-of-a-kind pieces. I've drawn up characters from all my books, for example Joey and Wendy from Punk Rock & Trailer Parks up top. And have created a series of Ghoulardi Finks, featuring a mash-up of Cleveland's beloved horror movie host in some Big Daddy Roth hotrods. The ones here are just a few of the 20 or so I'll have for sale. They won't last long. In addition, I'll do pieces on request while at the con, although I'll be under a time constraint, obviously. Each pieces takes me a half hour or so, so do the math.

These aren't available by mail order, and I won't reserve anything. You want em? Come to Genghis Con and get em! Doors open at 2 pm.

Posted by Derf Backderf at 5:43 PM