Some thoughts on the grand opening of the Billy Ireland Cartoon Museum at Ohio State University this past weekend.

As I wrote a few posts down, I'm a graduate of Ohio State, part of its great tradition of comix creators, stretching all the way back to Milton Caniff. The Cartoon Museum is woven into my career, more than any other pro except for Jeff Smith, whose beginnings mirror my own.  It had just been founded when I started at the school, initially as the Milton Caniff Cartoon Reading Room. Caniff donated his art and papers to the university, which was frankly lukewarm about the gift (like all large universities, it prefers cold hard cash from illustrious alum), but two small classrooms were converted on a little-traveled side hall in the Journalism Building to house the collection. Curator Lucy Caswell was put in charge, under the umbrella of the OSU Libraries. Few knew of its existence. 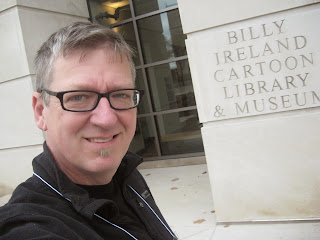 I started at Ohio State shortly after. I was a journalism major and walked by that door with the intriguing sign "Milton Caniff Reading Room" every day. Finally on a whim I veered right, turned the knob and walked in. There was Lucy behind a desk with a smile and a greeting. I introduced myself and was stunned she knew who I was and knew of my then embryonic work. At that point, I had done a number of cartoon ads for the OSU Bookstore chain, which were plastered all over campus, but done only two or three political cartoons for the school paper, The Lantern, all of which were frankly godawful. It was the start of my most treasured mentor-student relationship.

I soon became the main political cartoonist for The Lantern and my comix career was launched. Over the next three year (and beyond) Lucy was my most valued confidant, a vital pillar of support from a faculty that was largely ambivalent (and ultimately antagonistic) toward me and my cartoons. She listened patiently to my complaints and fears and frustrations. She gently prodded me forward and celebrated my triumphs. She introduced me to working professionals.  I and a couple other students nagged her into offering her first comics history class. I harangued several Lantern staffers, including my future wife,  into signing up for the course so we had enough of a roster to get it on the schedule. This last tale btw elicits more looks of awe from fellow comix creators than my work does! She even got me an interview with Milton Caniff for a term paper I wrote for the class!  I shamelessly brag of my connection to Lucy, and have for years.

And over the next three decades, Lucy Caswell built this modest collection into the world's largest cartoon museum and research institution. The museum moved to larger digs in the bizarre Wexner Center when that deconstructionist masterpiece was built. Typical, the university higher ups stuck the museum in the basement, accessible only by a back door. The academic snobs at my alma mater had yet to acknowledge comix as a legitimate art form, nor did they have the slightest clue what Lucy was steadily building here. That finally changed with the arrival of some fresh blood and open minds in the faculty, and with some huge green donations from Charles Schutz's widow and massive donations of original art when competing museums closed their doors.

FInally, a new museum space was green lighted. Dilapidated Sullivant Hall, where I snoozed through several classes in its auditorium with famously soft seats, was selected as its new home. Right at the main entrance to campus. At last my alma mater has recognized what an incredible institution it has. It is quite a facility. And the opening show, Treasures of the Billy Ireland Cartoon Museum, is, for comix fans, simply the greatest collection of comix art I have ever seen. Puddles of drool were everywhere as pros and fans stared in open-mouthed wonder at the original art on display. Pardon my crappy photos, taken with my antiquated third-string camera (the first two were casualties of the My Friend Dahmer book tour and have yet to be replaced), but here's just a small sampling of what awaits visitors:

That's just a small sample of what this show contains. If you're a comix fan, DON'T miss the chance to see it.
Posted by Derf Backderf at 2:08 PM