The mad, obsessed, reclusive Randian genius. I love his work more with each passing year. See the lengthy post two down from here.

This Brit documentary In Search of Steve Ditko is worth a watch.


And believe it or not, Ditko has a website! Or rather someone has put one together for him. Lots of old stories from the Fifties which have, I guess, fallen into the public domain, and examples of the totally whacked new stuff he's doing. HERE

Ditko hasn't been interviewed, or appeared in public, since roughly 1968. He's written a number of "essays" on various topics, which appear in his books for micro publisher Robin Snyder. He writes several times about his Marvel tenure, mainly to rebut the unforgivable gloryhogging of the shameless Stan Lee. None of these, however, are online. Here's the last interview Ditko gave, for the comics fanzine Marvel Main in 1968.

Maybe the best insight into the guy is this humor piece from Amazing Spider-man Annual #1 in 1964. In my opinion, this is one of the greatest single comics of all time, 72 pages of all-new story and art. This three-pager on how Stan Lee and Ditko "worked" together offers between-the-lines insight into their contentious relationship: the gag insults that ring all too real, Ditko hanging up on Lee, etc. And it shows in a few quick panels how Ditko worked. Wonderfull. 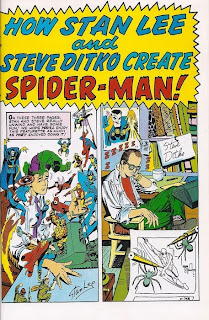 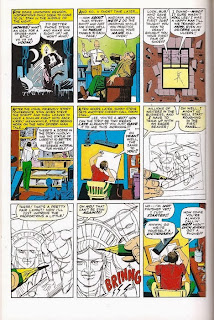 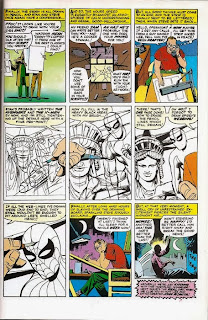 Posted by Derf Backderf at 5:00 PM