This is the lone Marvel film made so far that I have any interest in seeing, because it looks like great, stupid fun. It's a crazy compendium of the weird Seventies comics I loved so much. I'm sure it will crumble at some point in the film, as they all do, under the weight of its own earnestness and predictable Hollywood bullshit, but it looks like an enjoyable ride.

But no, my Marvel boycott is still firmly in place. Disney, like the previous Korporate Kreeps who owned Marvel, still won't do right by the creators of these Marvel characters, most of whom received nothing but the slave wages of the time for franchises that have made billions (yes, billions) for the corporations. In the case of Guardians, which is pieced together from some of the weirdest comics ever made, that would be Jim Starlin, Steve Englehart, Keith Giffen, Doug Moench and Jack Kirby.  Starlin had to buy HIS OWN TICKET to The Avengers premiere, even though his famous creation, Thanos, was the big, after-the-credits teaser! He received nothing from the film. That pretty much sums it all up right there.

It was a PR disaster when Marvel stiffed writer Gary Friedrich, who was bankrupt and seriously ill, when the lousy-but-profitable Ghost Rider films came out. Marvel eventually reached a settlement with him, but he had to sue to get it. Thankfully, there were lawyers just as outraged about this as I who worked pro bono in his behalf. Starlin is doing quite well. He owns a number of his own properties, like Dreadstar, and still does some work for Marvel, but only using the characters they own, nothing new.

The biggest crime, as always, concerns the late Jack Kirby, the creative god who solely created, or co-created, virtually all the Marvel characters you know of: Iron Man, the Hulk, the Avengers, the X-men, everything except what another creative god, Steve Ditko, created, mainly Spider-man and Dr. Strange (also soon to be a movie blockbuster).

The Guardians film demonstrates both the breadth of his imagination, and the great crime perpetrated on him by the largest entertainment company in the world. The villain is his, Ronan the Accuser. And so are one of the Guardians, an alien living tree, Groot, who was dreamed up by Kirby for a throwaway sci-fi monster short story in one of Marvel's books in 1961, before Marvel launched the Fantastic Four and its other ground-breaking super-heroes This was when Kirby kept the struggling company afloat virtually on his own. Kirby probably got $30 for the eight-page story. 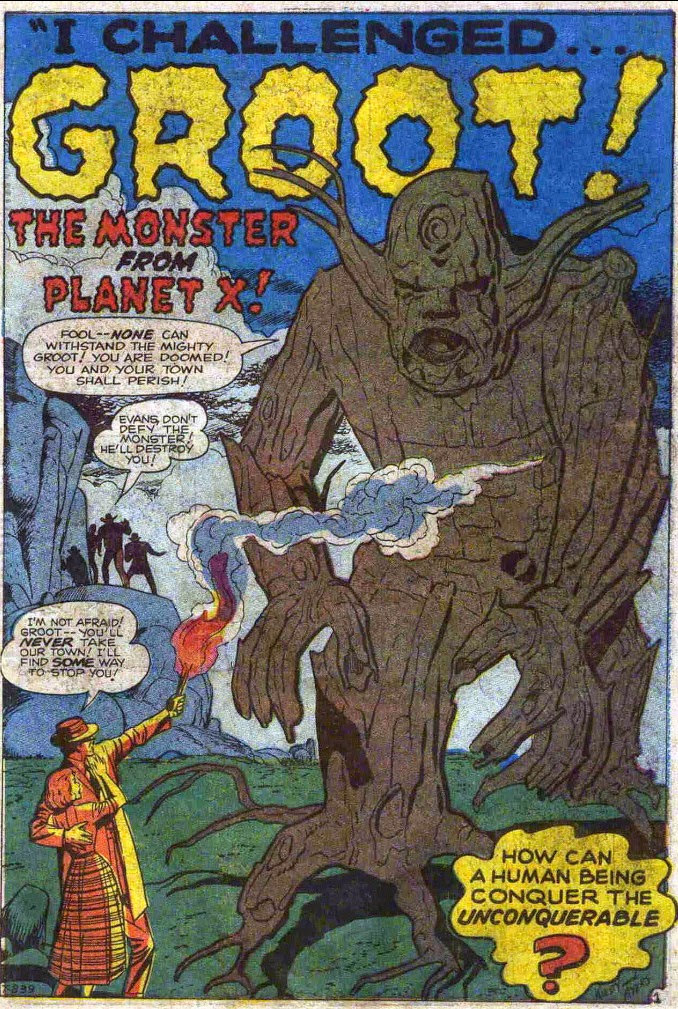 Now, the devout modern fanboy will argue: "Oh, but the Groot character has been enhanced by SO many writers and artists since!" Bullshit. Look at Kirby's Groot above. It's the same character design! No one "enhances" Kirby! What came out his imagination, even a throwaway like this, is far better than anything anyone could dream up since. The common fanboy "I don't care" stance is one that infuriates me. Nothing can get in the way of their precious Marvel Universe continuity, especially not some old dude who died 20 years ago. It's all so delicately woven, you see, and forms this amazing interlocking story of unmatched depth and complexity. Total crap, of course. Marvel reboots the whole thing every five years because they've made such a hash of it no can keep it straight. Ninety percent of it is dreck anyways. It's an argument without legs.

Kirby fought until his death to get a piece of his many characters. Marvel, then owned by the loathsome Wall St. vulture Ron Perelman, threw legions of lawyers at him. Marvel even held several hundred pages of his original art as hostage to force him to sign a universal right release. Marvel still has those originals, now worth $10,000  to $20,000 EACH! Kirby didn't want the characters for himself, just a fair cut. His kids and grandkids continue that battle. They'll lose. Disney is above the law. If the law goes against them, Disney simply has its paid stooges in Congress write them an exception, as it did when Mickey Mouse's copyright was about to run out and the character was poised to enter the public domain.

At the time Kirby's suit was filed, Marvel was giving its stars royalties based on the sales of their hit books (starring characters they, mostly, didn't create), something Kirby had never received. Todd MacFarlane, Jim Lee and Rob Leifeld were making six-figures. Churn that in your mind. The epic hack Rob Leifeld made hundreds of thousands in royalties while the great Jack Kirby toiled away at a measly page rate. Even that wasn't enough for those young Marvel stars and they soon bolted en masse to form creator-rights Image Comics, where they all made great fortunes.

And modern creators make a hefty dime working for the Big Two, with money up front and a royalty cut. These guys enter into with eyes wide open. They know anything they create is the intellectual property of the company. They're well-paid and well-treated.

That wasn't the case for Kirby and Starlin and the rest. There was no contract. The moment that one appeared, on the back of freelance checks, so in order to endorse the check you had to fork over all rights to everything you ever did, manny of these guys stopped working for Marvel. Kirby left comics altogether for animation, and only returned for one last gasp mostly with some of the creator-rights companies of the Eighties. How much would it cost Disney, one of the wealthiest entertainment conglomerates in the world, to do right by the old guys? A pittance!

As for Marvel? They've paid a price for their hardline stance, as has DC. Name the last major character to come from Marvel. Wolverine maybe? That was in 1973! Forty years ago!! The last DC major character? Maybe John Constatine, now that he has a tv series on the way, but he was created by Alan Moore in 1985 almost by accident. That's nearly three decades ago! By the late Seventies, long before billion-dollar movie franchises, creators had revolted at both companies and gave them nothing new, or left the publishers altogether. Many fled to the nascent creator-rights publishers. That's where major characters like Teenage Ninja Mutant Turtles and Hellboy emerged. Those that stayed at Marvel and DC, like Alan Moore, even under far better terms than Kirby, rued the decision. So now Marvel and DC endlessly regurgitate the same characters and same tired storylines. Readership has plunged. The top-selling comic book these days is Batman, at about 115,000 copies a month. In 1967, it sold 800,000 copies a month! 115,000 copies wouldn't have even cracked the top 50 back then. Titles that outsold 2014 Batman? Teenage Hotrodders, Millie the Model and The Adventures of Jerry Lewis!

Look, I've nothing against super-hero comic books. I loved them.... when I was 15. I still love those comics and still own the ones that meant the most to me. I study them like textbooks. I freely admit I don't get why a 45-year-old dude would be breathlessly awaiting the latest development in Zombie Teen Titans vs. the Hooters Models. But then I don't get why anyone would wolf down Taco Bell either.  And face it, the films are every bit as bad, if not worse, than the comic books. It's just banal, predictable, boring corporate product. Whoopee! Who wants to watch Ben Affleck's Daredevil tonight? And did I mention the Guardians of the Galaxy toy line is already out?

So my boycott is this: I refuse to pay to see any of these films. If I see them at all, and that's rare, because they invariably suck, I wait until they come out on dvd and get a free copy from the library. Marvel and DC get none of my money. Does it matter? Of course not, but it's a start. If a couple million others do the same, which they won't, only then would Marvel and DC will take notice. Doesn't matter if it's hopeless. I boycott out of respect to these creators whose work meant so much to me as a kid, whose work inspired me, and continues to inspire me, in my own work. Especially Kirby. What was done to him was the greatest intellectual property crime of the 20th, and now 21st, century.

I owe them that.

Posted by Derf Backderf at 1:00 PM