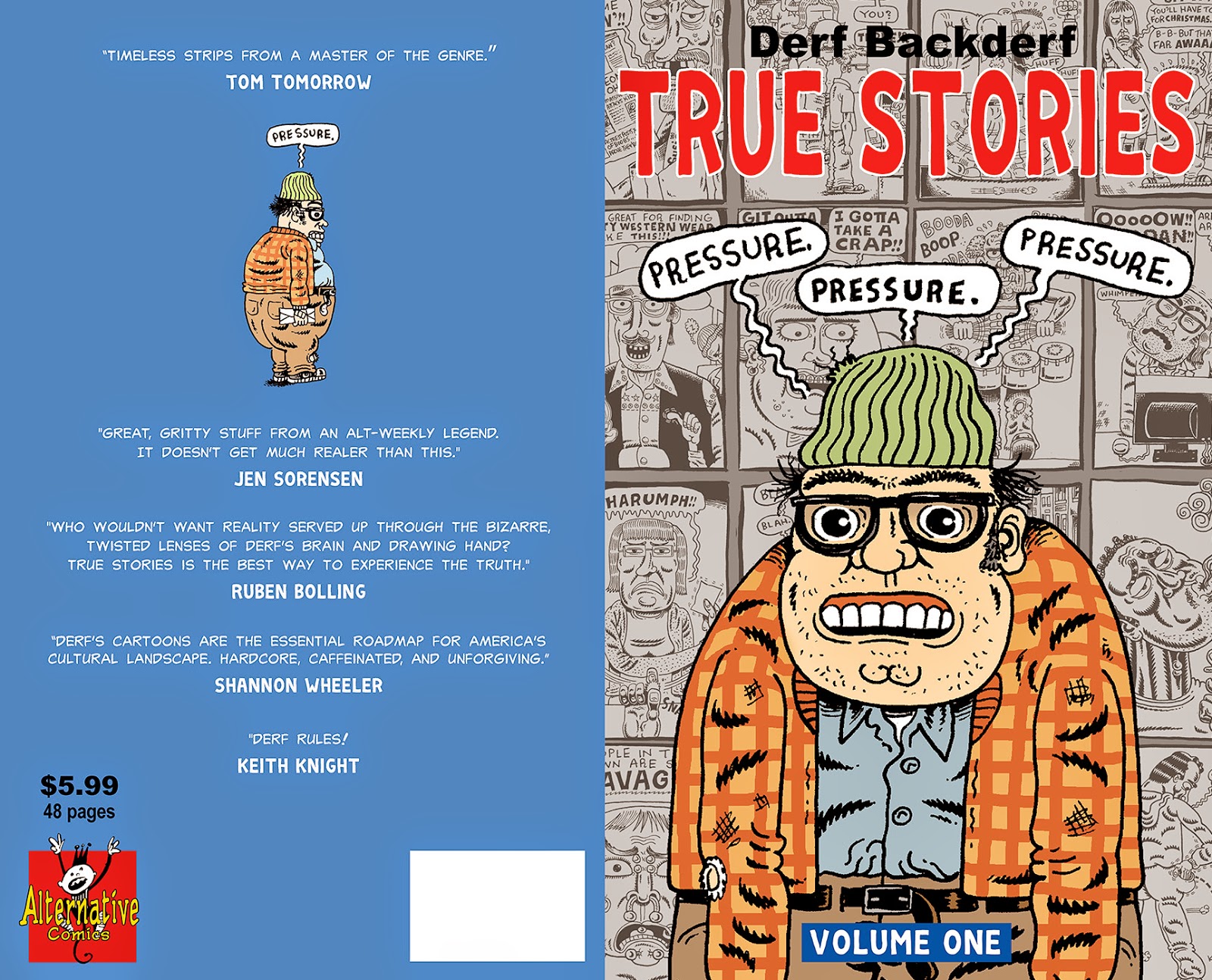 I'm very pleased to announce that the first in a series (at least 4 and possibly 5 volumes) of the True Stories from The City will be released in September by the fine folks at Alternative Comics. True Stories: Volume One

Each 48-page volume will collect different eras of True Stories. When I'm done, all 24 years worth will be collected, over 200 True Stories in all, virtually ever single one I drew (save a few dogs which will never again see the light of day).

I wanted to put out something to commemorate The City, which I shut down in May. Problem is, most of the City strips are extremely topical, very much tied to a time and place, or, since 9-11, very political. That stuff simply has no shelf life at all. What was I going to do, throw together a book of Dubya cartoons? Or Clinton ones? But the True Stories are different. Those are timeless. Ones I did in 1990 could run today and be just as relevant and funny. 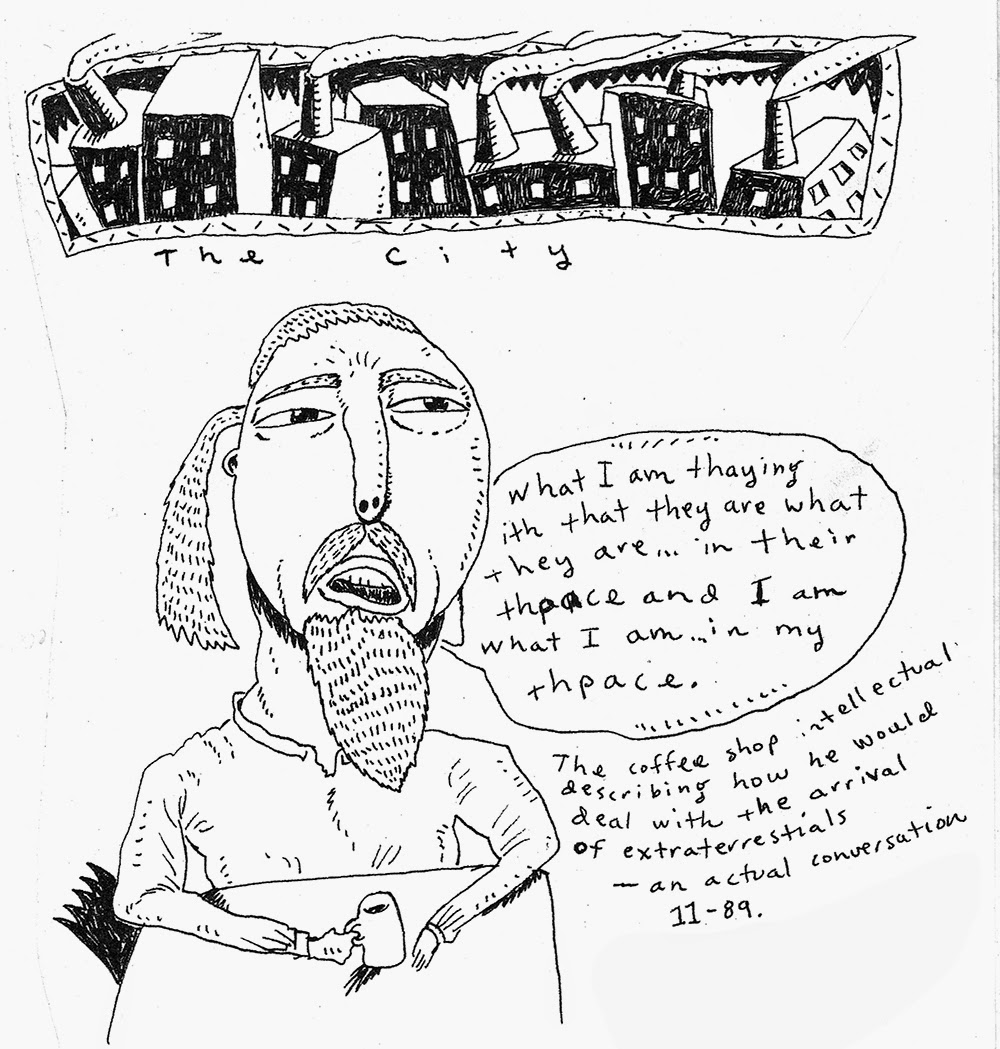 When I first sat down to develop quirky comix in the late Eighties, the very first ones I came up with were True Stories. I had a sketchbook full of overheard conversations and observed urban weirdness. Here's an example (above) from 1989. Not only does this page, drawn in a favorite coffee shop, contain a True Story, it also features the doodle where I came up with the name of the strip!

It was an exciting time of explosive creative output. I added a rotating cast of characters to the mix: White Middle Class Suburban Man, The Women With Big Hair and the psychotic yuppies, Mindy and Blaine. Longtime readers will remember these. But one week a month was always reserved for a True Story. It was a dose of realism that gave The City its pedigree. No matter how much the strip changed over nearly a quarter century, even after I dropped almost all my original characters and morphed a silly Gen X humor strip into a savage political one, the True Stories remained. 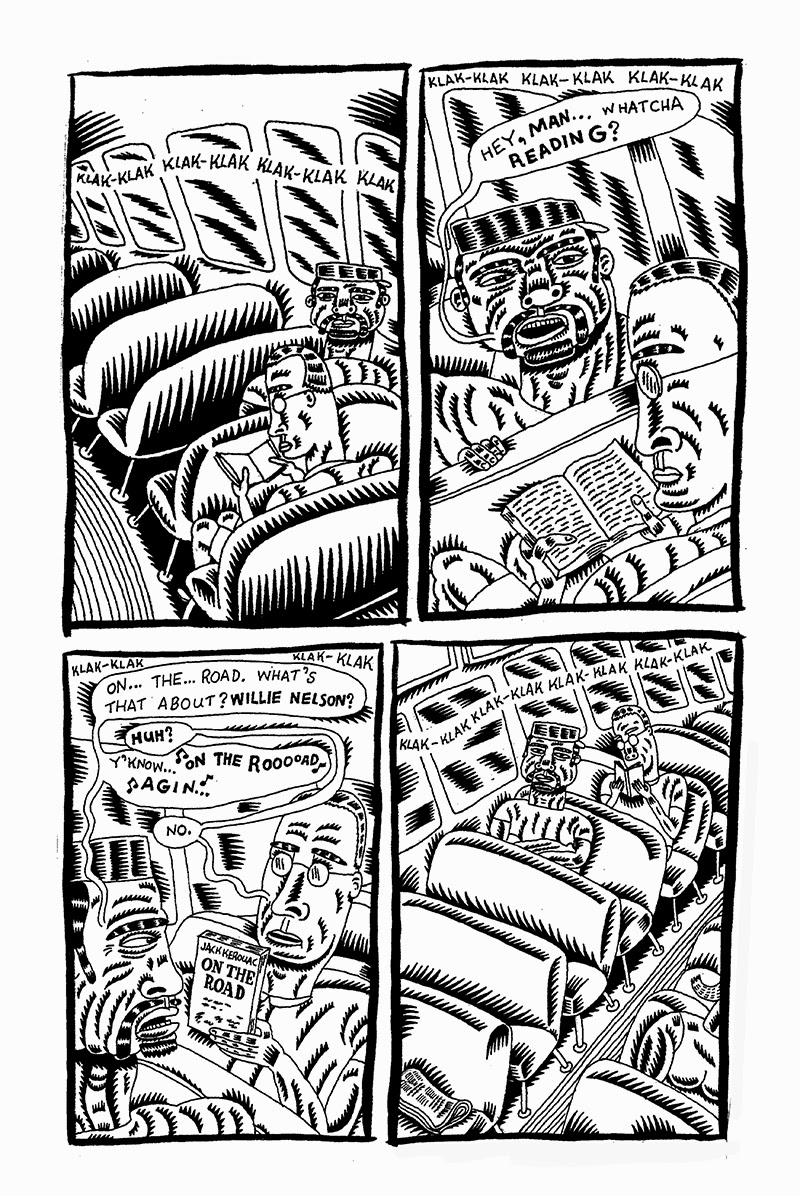 If The City was known for anything over the years, it was these stories. Here's an early one, above, from 1992. This is the format they'll be published in. I view them as diary entries.... one-page short stories. It's thematically cohesive, unlike the rest of The City, so collecting them made perfect sense. I think you're really going to like these volumes.

The publishing schedule is a little whacked. Volume One, above, will collect True Stories from 2002 to 2008, what I consider the peak years. 2008 had me winning the Robert F. Kennedy Award for political cartoons and with Lynda Barry tabbing a portfolio of True Stories for the 2008 edition of Best American Comics.

We'll have to wait awhile for subsequent volumes, since the new Trashed graphic novel is slated for 2015 and I can't have anything competing on the shelves with that. After that, Volume Two will cover strips from 2009 to the end in 2014. Then it's back in time for Volume Three, with True Stories from 1996 to 2001. Volume Four will include my earliest True Stories, from The City's debut in 1990 to 1995. Those last two volumes are dramatically different stylistically than my later work. I've never been a creator that stays in one place. I like those stories, but some of the artwork is, frankly, dogshit.

It's possible these last two volumes may be stretched out to three. I need to visit my archive of originals at the Ohio State Cartoon Museum, since my digital archive of this years is sparse.

There'll be a pre-order option, which I'll post as soon as I can. True Stories: Volume One will debut at the SPX con in DC.

Posted by Derf Backderf at 6:35 PM