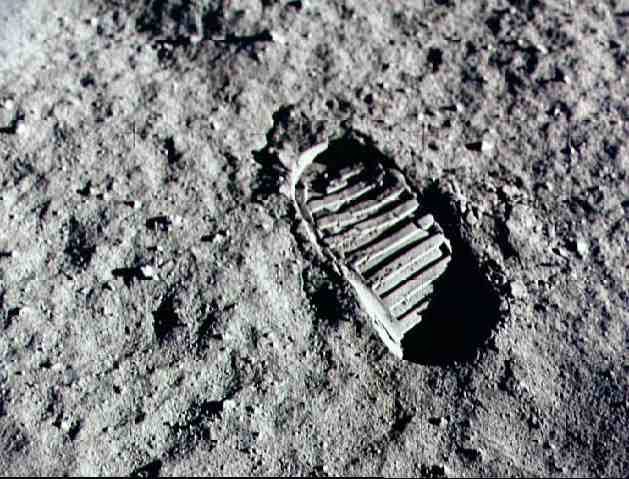 Forty-five years ago today, Armstrong and Aldrin walked on the moon.

Then, as now, the human race was busy slaughtering itself on the blue globe on the horizon of the Sea of Tranquility. Nixon began secretly and illegally bombing Cambodia. Catholics and Protestants faced off in bloody street battles in Derry. College campuses exploded in antiwar protests, and students were met with violent suppression by police and troops. The first victim of the then-unidentified AIDS died in St. Louis. The Cuyahoga River caught on fire for the last, and most infamous, time. The Football War pitted Honduras against El Salvador. The Manson Family went on its murder spree. A bloody coup in Libya put Colonel Muammar Gaddafi in power. Whites fled US cities in a panic as cities and schools were forcibly desegregated. It doesn't appear we've advanced one millimeter since.

I stayed up late with my Dad to watch Neil Armstrong climb down the ladder onto the moon's surface at 10:56:20 pm. I have this photo of Buzz Aldrin's footprint pinned on my studio wall. It represents what we humans CAN achieve, and so seldom do. It's the antithesis to the superstitious sociopaths who embrace oppression, ignorance, martyrdom, greed and power and appear to have overrun the world.