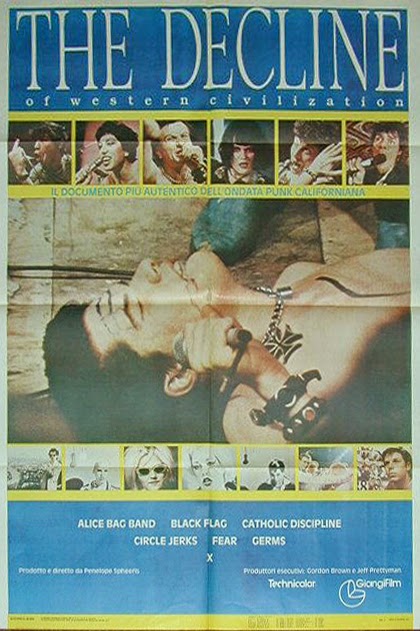 The Decline of Western Civilization is an American documentary film filmed in 1979 and 1980. The movie is about the Los Angeles punk rock scene and was directed by Penelope Spheeris.

The LA punk scene got a lot of press in the day, maybe more than it deserved. There were a few bands of obvious brilliance, like X and the Avengers, and several others who were above average. I myself never had much use for West Coast punk. I took the hard-line,  jingoistic stance of a Rust Belt punk rocker.  But, of course, that was stupid and there's great music aplenty that came out of SoCal.

The initial screenings of Decline in LA were riotous affairs and LAPD Chief of Police Daryl Gates wrote a letter demanding the film not be shown again in his city.

Darby Crash died of a heroin-induced suicide shortly after the film was released. Another problem, since Crash was the central image on the poster and appears to be laying dead on the floor (above). So that one had to be pulled from theaters and swapped out with a hastily made substitute (below). The film got ok distribution, mostly in theaters that catered to college audiences. That's where I first saw it, at an art house theater near Ohio State. Later, strangely, it popped up on embryonic cable tv! Back then, there were entire stations that showed movies on continuous loop. Some of the great cult films of the Eighties became cult films because of this: Fast Times at Ridgement High, Road Warrior, Evil Dead, etc. These were supposed to be pay channels, but early cable was so easily hacked, every kid who lived off campus rigged their cable box with a paper clip and watched these things continuously. I can still quote Fast Times line for line I watched it so many times! And Decline was in that loop. 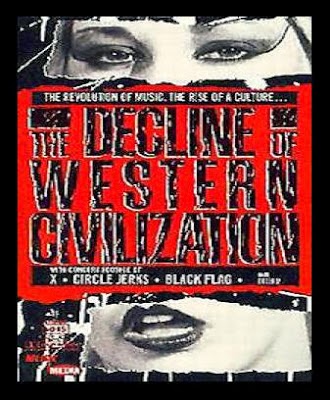 There were better bands in New York and London, but what I like about The Decline of Western Civilization, and what makes it unique, is that it was filmed right then, in the fucking moment, not as a retrospective, 25 years later, like End of the Century, about the Ramones, or Westway to the World, about the Clash, both of which are incredible films. Decline is a time capsule. No one was making movies about punk rock in 1979. This wasn't the Woodstock Generation, with happy hippies frolicking about and Madison Avenue drooling to sell them shit. Punk was feared and suppressed and exiled to the fringe. The suits just wanted it to go away!

Over the years the film has gained cult status, but it has all but disappeared from circulation. It was released on vhs, but never on dvd. For years, it existed only as random piecemeal clips on Youtube. You could piece it together with a half hour of determined hunting. But damned if the complete documentary isn't up right now. Don't procrastinate. Who knows when it will get taken down.