A Kent State artifact, a yearbook like no other

This is a copy of the 1971 Kent State yearbook, The Chestnut Burr. It's the edition that documents the events of May 4, 1970. A crucial piece of source material for me.
It's a remarkable book, and the only university publication that documented the tragedy. Immediately after the massacre, the university was closed, and all students were ordered to be off campus (and, in fact, across the city limits!) by 5 pm or face arrest. This order also closed the Daily Kent Stater, the school newspaper, which had been been closely following the escalating protests at Kent. Since the Stater only published Tuesday through Friday, it didn't publish a word of its reporting on the unrest, which began Friday afternoon.

As a result, all the on-the-ground reporting, all the incredible photos, had no place to be published! The Ohio governor effectively muzzled The Kent Stater. Some of the photos found their way to mainstream publications, be it the wire services or magazines like Life and Time, but much of it would have never seen the light of day, if not for the yearbook. 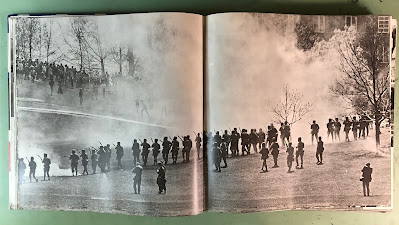 Above: the Guard moves on students, driving them up Blanket Hill, even though most weren't protestors at all, merely kids on their way to and from class who stopped to watch. This contingent of soldiers are the ones who inexplicably opened fire. Note the man in the bottom right, following the Guard as they move up Blanket Hill and taking photos. That is the student FBI informer, Terry Norman, whose full role on that day is still unknown. 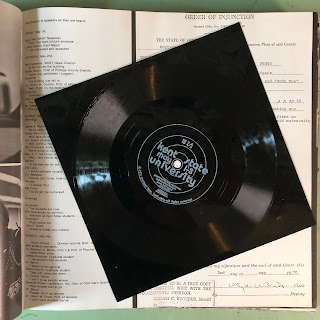 Above: included in the yearbook is a flexidisc, with "The Sounds of May 4." On it are various news reports from that tragic day and the events that preceded it. 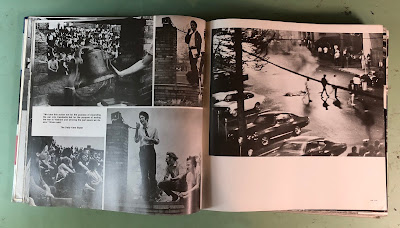 Above: the events of Friday, May 1, that kicked off the conflict on campus. Students burying a copy of the Constitution (left page) is the opening scene in my book. On the right is one of the few photos from the riot on Water Street that night. There just weren't many photogs present, and, of course, no cellphone images or video as we have today. The photo technology of the day made shooting at night, with harsh lighting conditions, and from a distance, damn near impossible. It's hard to understand, for those who didn't shoot photos in the film era, how challenging (and expensive!) that technology was, compared to the super-computer cellphone cameras we all have now. 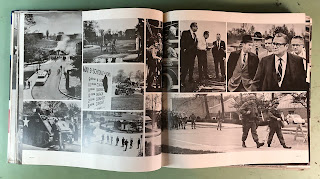 Above: the tense events of May 3, when Ohio Gov. Jim Rhodes arrives on campus and grandstands for his base. His fiery, table-pounding press conference ratcheted paranoia up to a fever pitch. 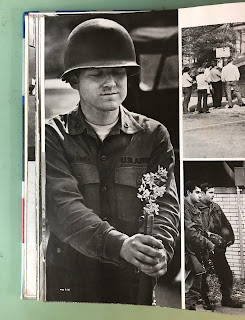 Above: the Guardsman with flowers in his gun barrel, which Allison Krause immortalized, a few minutes after this photo was taken, with "Flowers are better than bullets!" 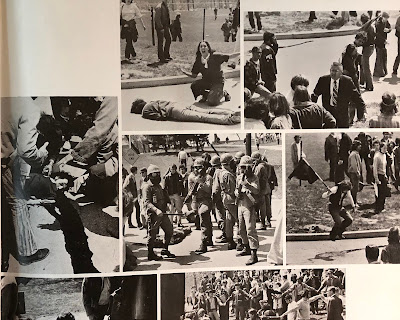 Above: The grim carnage. Has any other yearbook in American history included such images? I doubt it. Student photog John Filo's iconic photo of Mary Ann Vecchio wailing over Jeff Miller's body (top center) won him the Pulitzer Prize. It's curiously downplayed in this layout. 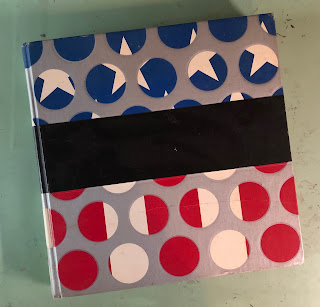 Above: the understated cover of the yearbook. 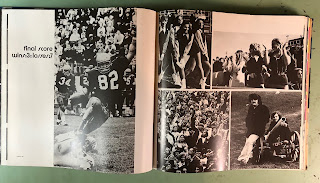 Above: the rest of the yearbook offers a positively bizarre contrast of typical college events. Here's a spread on Kent State's rotten 3-7 football team, as if anyone cares. 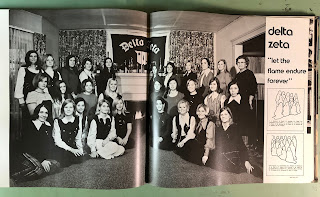 Above: even more bizarre are the requisite photos of Greek life. Here the ladies of Delta Zeta beam for the camera, as if the massacre documented a few dozen pages previous hadn't happened at all. 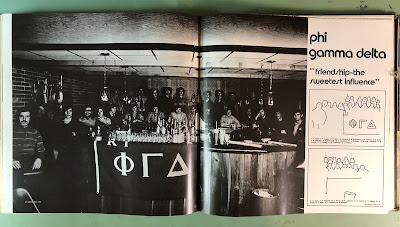 Above: the men of Phi Gamma Delta, posing proudly in their frathouse rec room, with their bar glasses neatly displayed, is a real eye-roller, too. At least they had the sense to not pose hoisting full beer mugs! 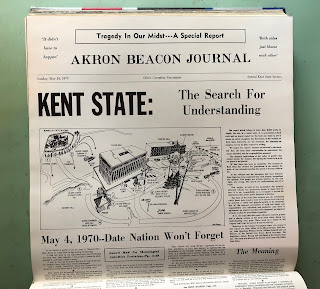 Above: the yearbook ends with a reprint of the complete investigative report that ran in the Akron Beacon Journal three weeks after the massacre. The ABJ won a Pulitzer prize for its breaking news coverage of May 4.

This special report was produced by a Knight-Ridder Newspapers team working out of the Beacon newsroom. Knight-Ridder was the parent company of the ABJ, Akron press baron John Knight being the owner of both the ABJ and of Knight-Ridder.  The team was  mostly reporters and editors from the Detroit Free Press, another Knight-Ridder paper, although they relied heavily on the Beacon reporting. They were not exactly welcomed with open arms in the Akron newsroom, where staff felt they were elbowing in on the Beacon's story, but it's an excellent report. It ran in all Knight-Ridder papers, a dozen or so, on May 23, 1970. It was a Pulitzer finalist.

The special report was met with fury by Akron readers, because it blows holes in most of the National Guard's excuses for opening fire on a parking lot full of students, most of whom were not protestors. Jack Knight later joked that this report cost him $1 million in lost subscriptions and advertising.

Posted by Derf Backderf at 2:09 PM