Kent State and Comics, a look back. Part 3 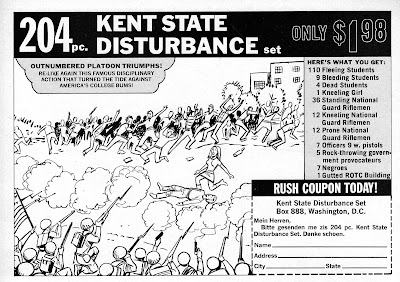 Of all the political cartoons about the Kent State Massacre that I've found, this one (above) is head and shoulders above the rest. It's from National Lampoon, the great satire mag of the Seventies, October 1973. It appeared just three years after the events of May 4, 1970, and when the pitched political battles over the shootings were still being hotly contested. The indicted 25 students (and one faculty member) had their cases abandoned by state prosecutors in late 1971. The six Guardsmen who the FBI identified as shooting into the crowd of students would be indicted and put on trial in 1974, and were quickly exonerated when charges were thrown out of court. So this satire falls right in the middle of all this.

It's not terribly well drawn, but is brutally hilarious. It was conceived by writers Marc Rubin and Chris Miller (who later co-wrote Animal House) and drawn by Francis Hollidge, a pseudonym of veteran comics artist Frank Springer.  Frank took over for Jim Steranko on Marvel's Nick Fury, Agent of SHIELD. Guess Frank felt he needed to use a fake name, to avoid trouble.

The Kent State piece is a comic book ad that spoofs the cheap Army Playsets that were always advertised in comic books. There were sets for World War 2, the Revolutionary War, the Roman legion, etc. 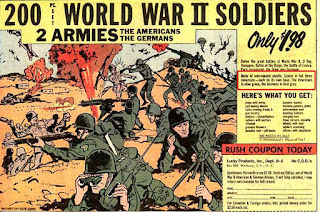 The Kent State ad ran on the inside cover of a larger spoof comic book, G. Gordon Liddy, Agent of CREEP, a highlight of this issue of NatLamp. CREEP was Nixon's infamous Committee to Re-elect the President... and creeps they were, being responsible for a long list of illegal "dirty tricks," as well as the bungled Watergate break-in, which was blowing up in 1973 and would bring down Nixon less than a year later. That operation was led by Liddy, who was uncooperative and unrepentant. He was sentenced to 20 years (commuted by Jimmy Carter, for some reason).  he was released after 4 1/2 years in the pen, the last of the seven convicted Watergate conspirators to be freed. 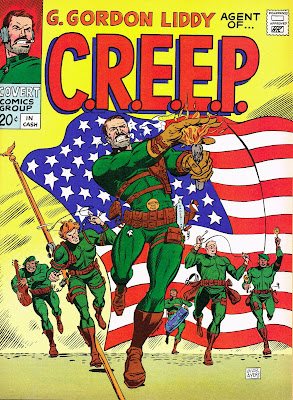 The best part of the satire is the Kent State ad. That one packs a wallop! So much so, I've never shared it on social media. Too many of the Students of 1970 follow me there. I think this piece would hit WAY to close to home for them, but... man!... as a political cartoon, it's absolutely great.

Posted by Derf Backderf at 4:12 PM